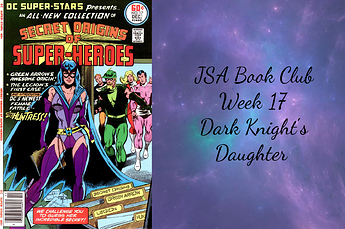 Hello fellow JSA Club Members. We’ve been doing a lot of readings in recent months that have dealt with various teams connected with the JSA as well as the JSA itself. This week I thought it was time to change things up a little and concentrate on a single character who is connected to the JSA. I will be doing this periodically just for a change of pace and there are a lot of potential characters out there we could take a closer look at.

This week we are going to be taking a look at a character who is the daughter of one former JSA member and a member of the team herself: Helena Wayne otherwise known as The Huntress. Her father may be the Batman but her mother is none other than Selina Kyle. To see how this came to be lets call this meeting to order and get reading! 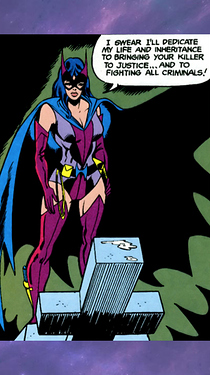 Readings for this week

And that’s all we have for this week.

Aurora is taking a break from the JSABC for personal reasons but the club will continue as it has been.

Next time we will spend the first half of the month taking a look at 1987’s Young All Stars and the second half we will cover issues from 2006’s Justice Society of America.

It’ll be interesting to compare this Huntress with some of the later versions of her.

She’s been showing up as a back feature to the newly digitized Wonder Woman comics from the early eighties.

The DC History Club
Did a month on.the
Various Huntresses

Including
Wiki reference
Links and videos
Which might be useful

DC History Club: Huntress Topic for June 2020, with Polls Quiz Wiki & Discussions Post 01 2020 June Huntress Intro The members of the DC History Club have voted for Huntress as the topic for June There are two versions of the Huntress. Helena Wayne is the daughter of the original Golden Age Earth 2 Batman and Catwoman. Helena Bertinelli is a Mafia princess whose family was murdered, leaving her the sole survivor when she was a young child. She vowed vengence Each week We will discuss …

If I had that legacy I would live up to it by learning the amnesia kiss from Superman II. Since nobody will be able to remember Batman I will have no trouble living up to him at all. What could possibly go wrong?

She was a back feature in WW for a bit, which was where I first encountered the character. I was glad to see those issues being digitized finally.

Thanks for the link @TurokSonOfStone1950.

If I had that legacy I would live up to it by learning the amnesia kiss from Superman II. Since nobody will be able to remember Batman I will have no trouble living up to him at all. What could possibly go wrong?

Re the Huntress backup

The DC History Club had Roy Thomas as a topic

“You took over Wonder Woman. Because you’re a guy, what was it like to come up with good stories for her?”

“No problem. I’d been reading WONDER WOMAN since I was at least five or six. But I talked things over, and to some extent co-plotted with, my girlfriend and soon wife Dann to get more of a female perspective. I’m happy with the short-run Gene Colan and I had on the magazine, but DC (without deliberately trying to) kind of double-crossed me in various ways and reduced my enthusiasm for doing the heroine, so I left.”

When Roy entered into a three year contracts with DC Comics He was to write 100 pages a month.

The Huntress backup reduced the number of pages he could write each month for Wonder Woman as well as potentially reducing his income. He had to find other titles to compensate for that loss of income

I have this in my archives. It doesn’t cover the all-Star Issues but I have those as well. 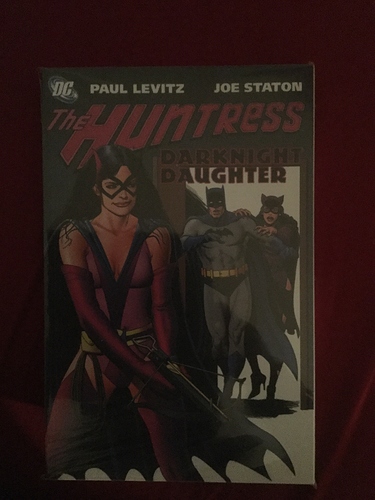 I have that trade as well. Though it doesn’t include those All Star Comics issues it does include some of the Wonder Woman backups that featured Huntress. Lots of familiar characters there including a team up between Robin and Huntress.

Thank you for putting this together! I love stuff like this, but I have a hard time finding collections put together like this.

It is missing in the library

Sorry about that. I realised after making this post that Batman Family #20 was the continuation of the story started in #19 but I failed to check that it was available on DCU. I’ll edit the original post to correct that.