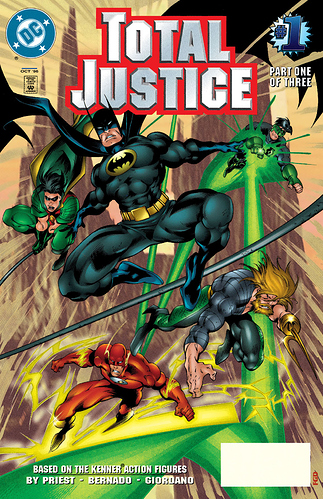 I hope you all had a fantastic Christmas and are looking towards a wonderful 2021 (speaking of wonder, how about Wonder Woman 1984, eh?). This week concludes two things: a look at comics that starred the Justice League which also featured tie-in toy lines by Kenner (best toy company ever, FYI) and Endless Winter, the current Justice League-based crossover that ran through various recently released comics this month.

What’s on the docket for this week? Read on for all of the terrifically tip-top and toyetic deets, friends! 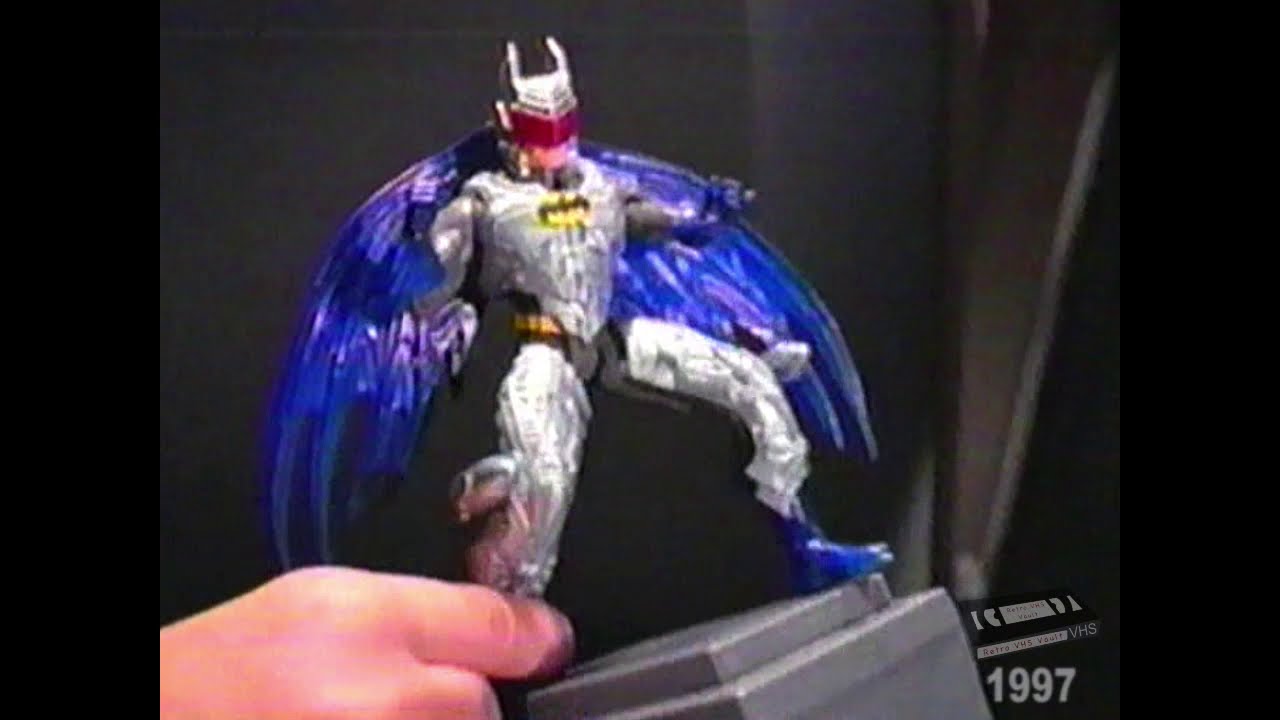 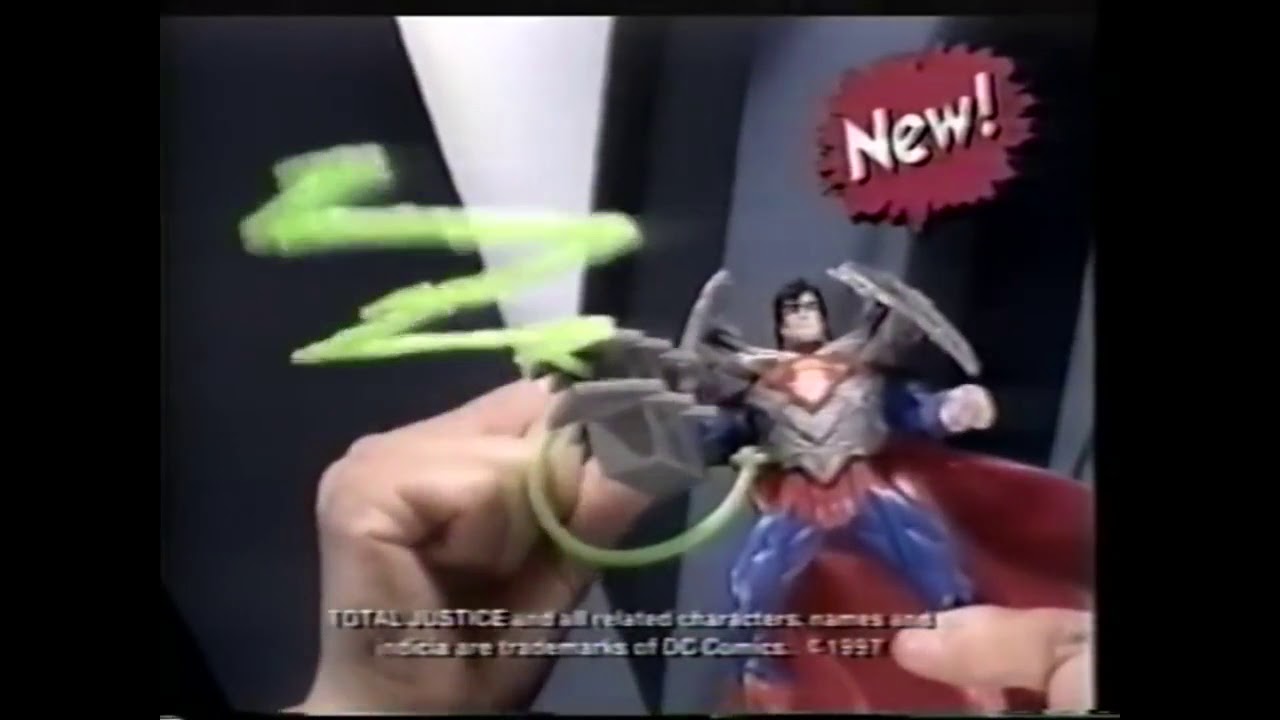 Sadly, Kenner didn’t have any TV ads produced for series three of the line, but here are photos of the figures in the series: 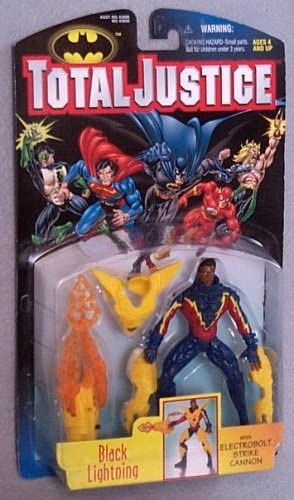 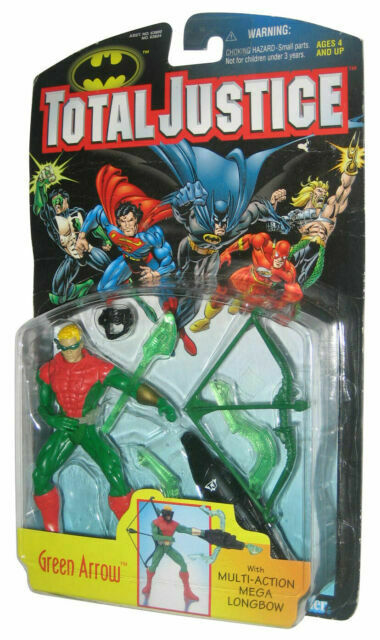 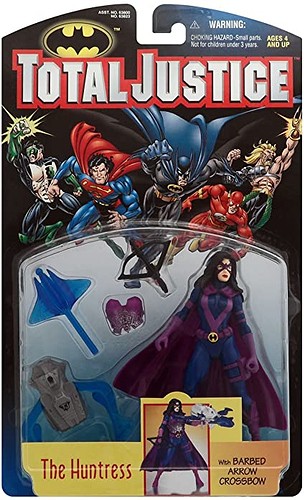 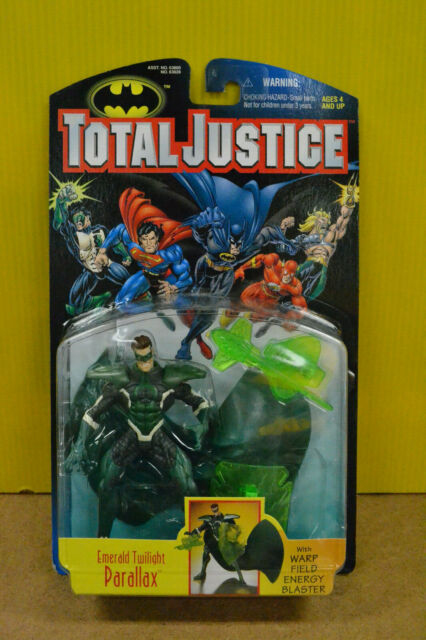 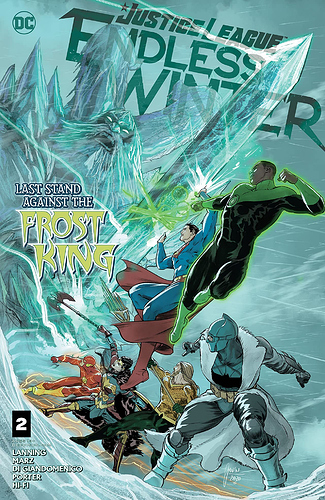 “Endless Winter” chapter nine! This is it-the final chapter in the five-week, nine-issue Justice League crossover! With the Frost King’s origin revealed, the Justice League must battle the mistakes of the past as well as the global freeze that now threatens the entire population. This issue is snow-packed with characters and action as Superman battles Black Adam while Batman, Wonder Woman, Aquaman, Flash, Green Lantern, Queen Hippolyta, and Swamp Thing face the Frost King and his monstrous army! All of the world is watching, and the Justice League must make a choice.

That’s the happs this week, League! Have fun, and I wish all of you a fantastic 2021!

I remember getting the hottest toy at the time, Aquaman with golden chest instead of grey.

Ah yes, the one major variant of the line, Aquaman with gold armor instead of his traditional (for the '90s at least) gray armor.

For those unaware, here are the figures in question (variant on the left, regular on the right): 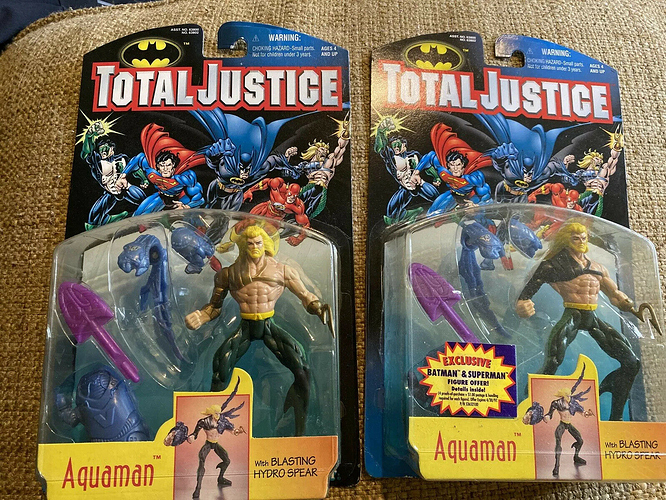 @Reaganfan78 Is this the Green Arrow you’re thinking of? 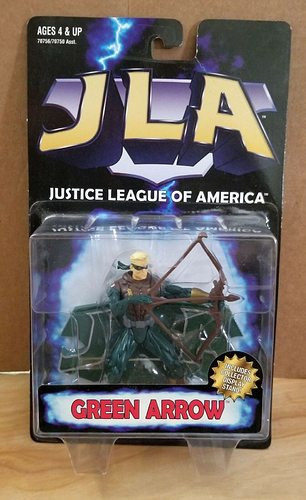 That’s him as he appeared in series 1 of the Kay-Bee Toys exclusive JLA line. Most of the heroes from Total Justice were repainted for that line.

Total Justice was based on the toy line of the same name by Kenner, which ran for three series from 1996 to 1997. Prior to this week, were you familiar with this line or the comic that tied into it?

Prior to this week unfortunately I was not aware of this.

What was your favorite moment from this week’s reading?

A lot of good moments to choose from this week. These were the ones that stood out the most.

Total Justice was written by renowned writer Christopher Priest. Are you a fan of his, and if so, where do you rank Total Justice amongst his other comic credits?

Not sure how many I’ve read from Christopher Priest, but after reading through this weeks selection I would definitely read some more of his work.

Those were also some fun commercials! Young ajm08g would have definitely gone to his parents after seeing them and said can we get them Ma and Pa? Can we?

Fascinating choice this time around. Bookmarked for consideration … I am a Priest fan for sure, although why he chose to write the current Vampirella is beyond my imagining…

Not sure how many I’ve read from Christopher Priest, but after reading through this weeks selection I would definitely read some more of his work.

If you should want to look into the Total Justice toy line, the good news is that all of the figures can be had for reasonable prices, and not much more than original retail ($5.99 at most stores) to boot! Check 'em out if you’re so inclined. To paraphrase Kenner’s own marketing hook, “They’re Kenner! They’re fun!”.

I was planning on starting up a Rebirth reading of those books one by one once we’ve transitioned to being an Infinite Universe along side the club readings.

One of those is quite good (especially so, according to @HubCityQuestion)

Ah… If it’s HCQ approved I’ll put it at the start of the list.

If you should want to look into the Total Justice toy line, the good news is that all of the figures can be had for reasonable prices

Regarding Rebirth Justice League @ajm08g, it’ll be featured at some point this year, but if you’ve never read it, please jump into the series when you’re ready.

For whatever reason, Hitch’s run didn’t get a lot of love, but I enjoyed it. His stories were fun and exciting, especially the issues drawn by Tony Daniel. They’re schway and then some.

Happy New Year everyone!! I wish you all the best and hope that 2021 goes far better than 2020

Total Justice was based on the toy line of the same name by Kenner, which ran for three series from 1996 to 1997. Prior to this week, were you familiar with this line or the comic that tied into it?

This all happened before I was born, so I had never heard of it before now.

What was your favorite moment from this week’s reading?

I also found it amusingly irksome how many times Wally mentioned his name was Wally West and he was The Fastest Man Alive/The Flash. Also Robin thinking Darkseid was a hologram was pretty great

Total Justice was written by renowned writer Christopher Priest. Are you a fan of his, and if so, where do you rank Total Justice amongst his other comic credits?

I don’t think I’ve read anything else by Christopher Priest and I don’t know anything about him, but I did really enjoy this mini series!

And those toy commercials are just glorious

And those toy commercials are just glorious

Aren’t they? Kenner toy commercials (be it for their DC product or otherwise) were always wicked rad. I’d be happy to supply you with other Kenner DC toy ads if you like…

Fun read this time around that drank a bit of the BIG bombastic Image superhero style “koolaid” of the early to mid 90s.

First, the Qs:
*Honestly wasn’t too familiar with this toy line in the 90s. By that time my son was 15 and “too old” for toys or his Castle Greyskull anymore. While my daughter who was 10 or so at the time did enjoy playing Overpower cards with me, she preferred real “dollies” back then.

*One of the typical “Priest” writer moments was when the time for big time action against Darkseid and the island parademons came, he did it in like half a page, like his heart wasn’t really into violent conflict. Rev. Priest reigns as a writer for lots of reasons, but it isn’t for 5 page battle scenes usually. He prefers to peek behind the emotional curtains of conflict and dwell there a while.

*I have enjoyed a lot of (former Chistopher) Priest’s work. When he “disappeared” for a while that was a loss for sure. I assume his current tenure on Vampirella will turn out to be secretly subversive in the end lol.

Now that I’ve answered the questions, on to Old Man Don-el sage and otherwise observations on this humble three issue reading (that I still took more than a week to get to…)

The whole concept of putting wild armor on superheroes already powered up without it was so “Image.” That video you post above that shows Hawkman’s “augmentation” is hilarious. Compare this snapshot from our three issue feature to the concurrently-published “Extreme Justice” title that until recently I owned by DC at the time: 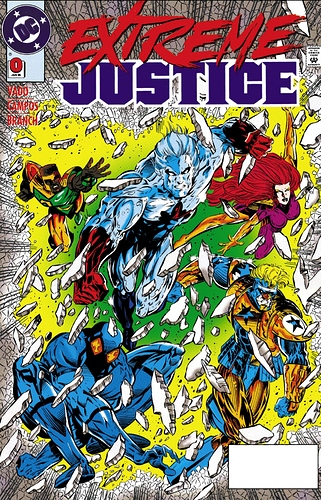 Wow, guess they don’t call him “Booster” Gold for nothing there lol…

Like others have noted, Mike the Enlightened “can’t we all just be friends” parademon was very much a Priest invention. The idea of troops hiding out in secret locations long after the battle and forgotten reminds me of the recent Naomi story where two opposing combatants have set down their arms and teamed up to survive and blend in with Earth culture. 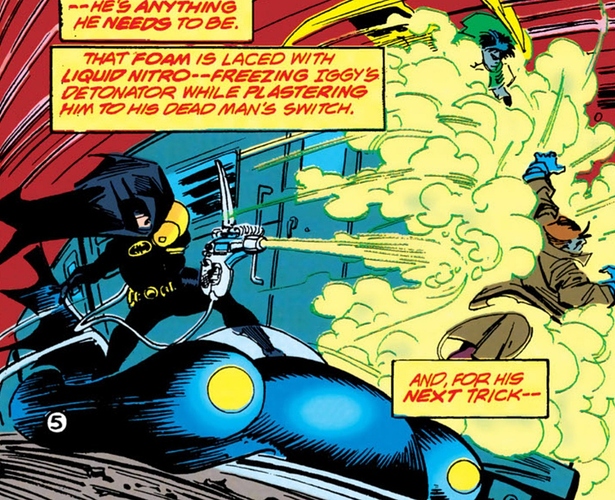 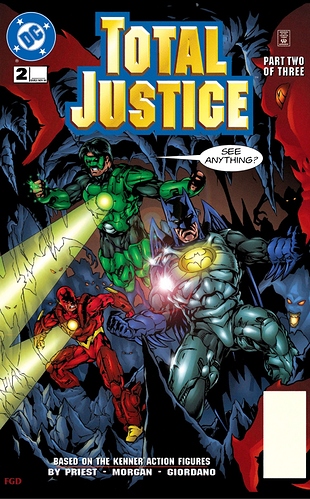 Unlike inside the comic books, at least this cover shows the toy armor as the color of the hero’s uniform. Also, this series had a different artist for each issue, yikes! This one featured a pretty decent artist from that time period, Tom Morgan who even provided the cover for issue 2. Maybe there was an internal office art staff fight over who could draw this fabulous series… 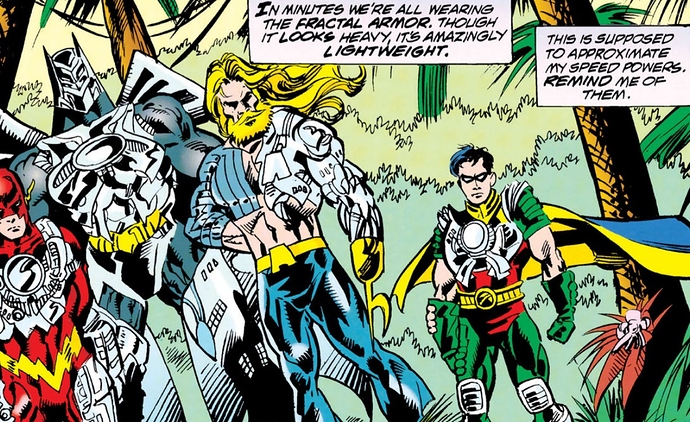 Above, the fab armor although in grey instead of translucent splendor like the toys, tsk tsk. 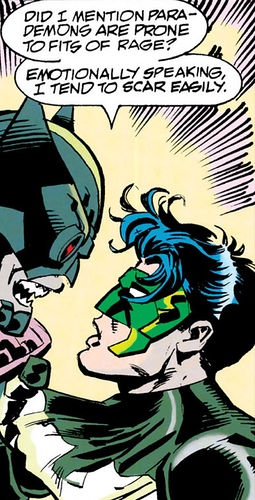 Had to post at least one jarring image of chatty parademon Mike. So hard to find a buddy these days… 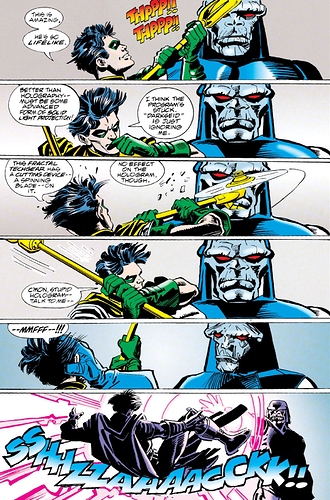 Taking a page for a vaudeville comedy sketch like Laurel and Hardy with “goof” and “straight guy” is SOOO Priest. 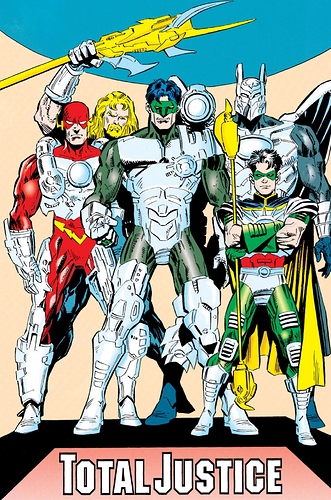 One more striking pose for the pen camera- oh, @Vroom consider editing the original top post here to have the hashtag total-justice-1996 on the upper right with plus sign so this discussion appears on the Community tab for the comic book series page in Comics.

@Vroom consider editing the original top post here to have the hashtag total-justice-1996 on the upper right with plus sign so this discussion appears on the Community tab for the comic book series page in Comics.

To quote Seymour Skinner: “Done and done. And I mean done!” 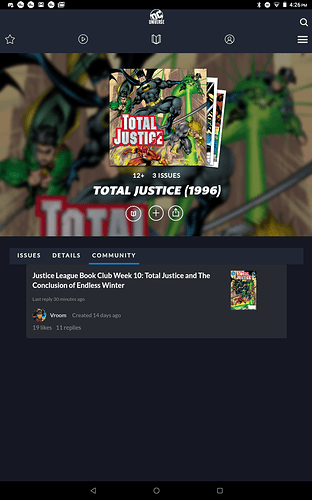 Thanks for the tip, Coach.