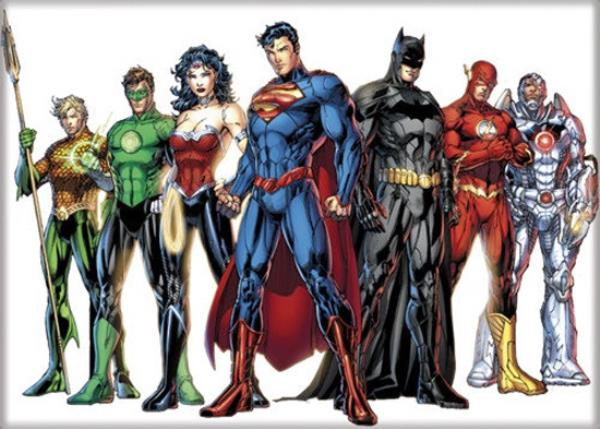 I hope you all had a splendid holiday season and are enjoying a swell 2021 so far.

2021 is the tenth anniversary of The New 52, so what better way to commemorate this milestone of the formation of a new era of DC Comics lore during the formative days of our new year than with the inauguaral issues of the book that launched The New 52: Justice League! Read on for the fun ways you can celebrate!

That’s the happs, League! For some, this may be your first time with this series. For others, a revisit. Either way, always remember that the Super Seven “has got this!”

Want me to talk about Superman again?

Favorite moment is when 52 ended.

Want me to talk about Superman again?

Shore! Any time is always a great time to discuss DC’s best and brightest!

Favorite moment is when 52 ended.

Well, 52 (as in the weekly book of the same name that took place between the end of Infinite Crisis and One Year Later) ended in 2007. Were you not a fan? It’s a pretty darn good series, I find.

I think before 52, Justice League had such a great run. I even love watching Justice League Unlimited. The only 2 costume changes that I didn’t care for was Superman and Wonder Woman.
I’ll go ahead give reading the 52 Justice League a try, and overlook their costume appearance.

The only 2 costume changes that I didn’t care for was Superman and Wonder Woman.

I liked Superman’s New 52 togs, but I love Wonder Woman’s New 52 outfit. Its absolutely my favorite look of hers, modern or otherwise.

It’d be swell to see Gal Gadot rock a New 52 suit in the next WW movie, especially if it’s the only seen in promotional artwork outfit where Diana was wearing black pants (which mimicked her look in The Odyssey, the last arc of the Pre-New 52 volume of Wonder Woman).

I liked Superman’s New 52 togs, but I love Wonder Woman’s New 52 outfit. Its absolutely my favorite look of hers, modern or otherwise.

Agreed on Wonder Woman… not agreed on Supe’s though lol. It’s all a matter of opinion, however.

Hmm, I’ve been missing out on these for a while, guess this could be a good time to jump back in. A 3rd re-read of this book couldn’t hurt (er, I mean, it might…)

Let Jim Lee’s pencils sooth you, for they always amaze and never hurt.

Aquaman’s trident to Darkseid’s eye though…yeah, that hurt but Darkseid deserved it.

Well, I mean, I joke, but I do have a special place for this book in my heart. Before I had DCU and Marvel Unlimited and all, I had a limited amount of books, and when I first started getting into DC, this is one of those ones I would read over and over till I had the money to get something new. Now, it seems I don’t re-read that much stuff anymore, mostly because I have a whole back catalogue to go through, and it seems to be best to move ahead. I enjoy opportunities like this to force myself to re-read something, though lol. Anyways, I’m rambling.

Perfectly okay, Skip. I do the same with this series and well, anything involving Johns and/or Lee. They’re not just swell, they’re also super!

John’s will always be the best.

As Mike Nelson once said “No argument here.”

This was my first time reading the New 52 justice league series, and I’d say I kind of liked it. Wonder Woman surprised me quite a bit, she was very war-like and cold in this representation. I have been reading Perez’s run where she seems a lot warmer and more focused on connecting humanity. It is an interesting take on her, not sure if I love it yet. I watched a lot of the movies and tv shows before actually reading DC comics, just because there was not many stores around with a steady supply. My favorite moment was between Batman and Green Lantern, when Batman steals his ring, thought that was funny. I also was a fan of the scene where Aquaman is introduced.

Diana is a bit hard-edged in the early issues of the series. Do remember that she’s not yet fully acclimated to man’s world though, so it takes her a while to warm up and become the Diana we all love. My favorite moment of her’s was “Ice cream is wonderful”. Ice cream is indeed great, but her enthusiasm for it was a neat little moment that I enjoy every time I read the issue.

Re: Green Lantern and Batman, I love Hal’s reaction to Batman upon first seeing him: “Batman? You’re real?!”

Thanks for joining in. Hope to see you around more!

Funny enough, I actually just got the deluxe hardcover of the first twelve issues of this book using the Amazon gift card I got for Christmas (along with a bunch of other great hardcovers). So needless to say I’ll be reading this from this awesome paperbook. 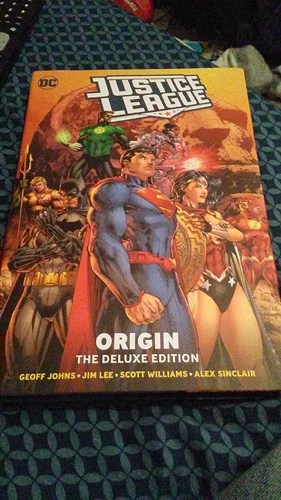 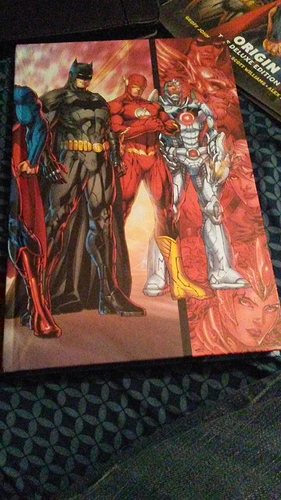 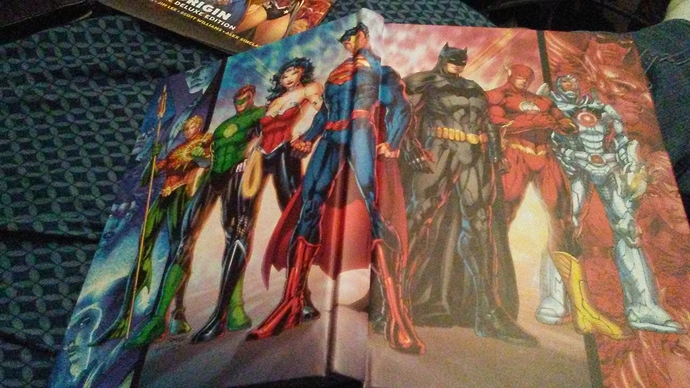 And here’s the rest of the books I got: 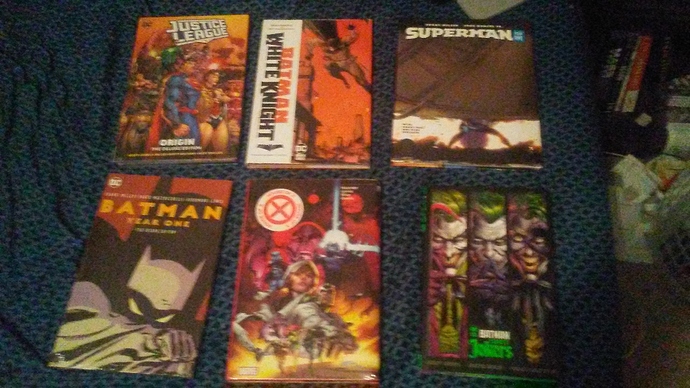 I had read the New 52 league before, but it was fun to read these issues again.
I have been into comics since the early 70s, although I stopped collecting in 1993 and only started reading again upon joining DC Universe a bit over a year ago.
I think my favorite moment was when Batman encouraged Cyborg so that he could shut down the boom tubes and stop the invasion.

Something neat early on I saw in my collected edition is an interesting foreword by Dan Didio, which reveals some stuff about this book I hadn’t heard before.

Firstly, Geoff Johns and Jim Lee decided to do a project together partly from being fans of each other’s work, but also to show that they’re able to do creative roles while still doing their new duties as part of DC Entertainment that they got at the time. They apparently went back and forth on a bunch of different potential books, before deciding on a book that would have had a little bit of all the characters they thought of doing together in the Justice League.

A big detail was that apparently, this project came to be before the New 52 revamp/reboot was thought up, and their run was initially going to be in the original Pre-Flashpoint continuity, with a slightly different and expanded team. They talk about how you can see it in one of the promotional artworks done for the book, which Didio specifically mentions new characters like Element Woman and Lady Luck. 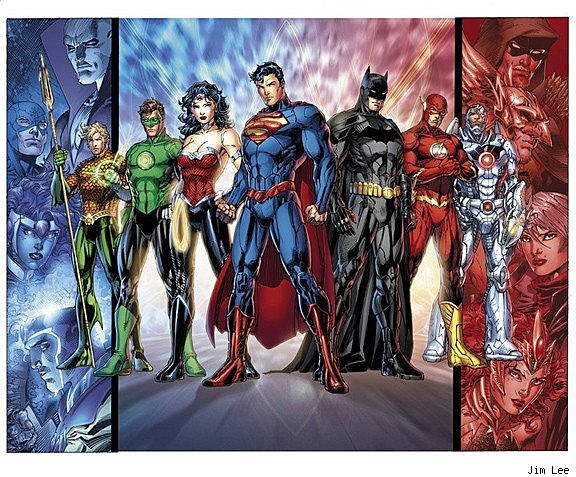 He also mentions that Jim Lee had already worked on a “beautiful two-page spread that had to be discarded.” Sadly though, said spread doesn’t appear in the collection! I wonder if they ever showed it anywhere…

On the costume discussions, these suits in this series aren’t my favorite, but I don’t hate them. Ironically, I feel like the best redesigns I’ve seen for these characters are some of the ones that were abandoned for this project, especially this take on Superman: 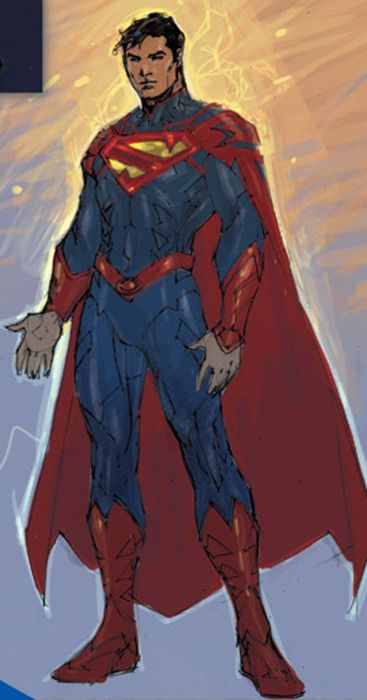 There’s also a really neat pencil sketch of Diana’s initial pants design that has some cool details, but I can’t find it on google images. I don’t remember seeing it on the initial backmatter for these issues either. Sad.

Diana is a bit hard-edged in the early issues of the series. Do remember that she’s not yet fully acclimated to man’s world though, so it takes her a while to warm up and become the Diana we all love.

Yeah, she definitely feels more like Red Sonja than Wonder Woman in these initial issues. I did have a thought when I was reading #3 today and saw the bottom panel shown: 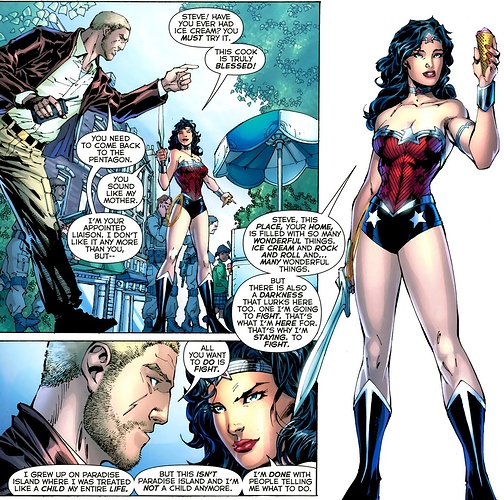 “I grew up on Paradise Island where I was treated like a child my entire life. But this isn’t Paradise Island and I’m not a child anymore. I’m done with people telling me what to do.”

To me I think this best informs what this take on Diana is going for. This is a younger Diana – if I remember right, it’s said somewhere she may be as young as 18 or 19. This is a teenage rebellion Diana, a young, vigorous woman in the prime of her life, trained in combat but never actually been in combat. Raised her whole life in paradise, she doesn’t know first hand the cost of war and the true value of peace.

So, looking at it that way, it definitely feels like a valid take on the character. I just kind of wish they played more with that concept, maybe gave her an arc of dealing with innocents lost and learning that while there is a thrill in combat, there is also a duty as well.

I absolutely loved this run and along with Injustice is what got me back into comics after a long break. Gosh was it painful having to witness those first couple of trades from rebirth JL. Literally some of the worst comics and certainly JL comics I’ve ever read. The only parts of this run that I’ve revisited since it came out was DarkSied Wars and it held up so I’m hoping this will also.

Funny enough, I actually just got the deluxe hardcover of the first twelve issues of this book using the Amazon gift card I got for Christmas

Nope – read it as it came out and a few times since then.

Yep. I think I started reading monthly comics on the regular around…Infinite Crisis, give or take? I think around this time when the book and the New 52 in general came out…while I can see the argument against doing the wide continuity reboot it did, I do think the DC line at this time needed a shot in the arm, something big and bold to kind of kick the dust off and do some different stuff with these characters. The era wasn’t perfect – what era was? – but there’s definitely some good stuff that came out of it, including this run.

Hmm…there’s a good amount to choose from.

As a Batman stan, I have to call out some of his good moments. While stuff like pulling the ring of Hal’s finger was hilarious and badass, what I liked were his more human, amicable moments. The big ones being him calming down Superman after getting in a fight, revealing his identity to Hal to get him to get the group to work together, saving Superman, and inspiring Cyborg in how to shut Darkseid out.

Outside of that…Vic becoming Cyborg and his transformation was cool, very effective and creepy, felt like a monster movie origin in a way, with a little Eldrich madness in the parademon stuff for flavor.

Aquaman getting the sharks to chow down on some parademons was chef’s kiss.

And overall the Darkseid fight was really well done. I liked how all the heroes were involved and played a role in defeating him, made him feel like a true, genuine threat.