SO AWESOME TO SEE THIS ON DC UNIVERSE!!! I paid money to watch it but I played it again and my TV went HDR immediately for it which was badass. Thanks DC for keeping this app going! DC Fandome was HYPE too!!

Also, this movie was sick af. My brother & friend & I couldnt believe how gory it was but in a good way, it made the stakes higher and made it more real. I’ll never forget the experience of watching it with them! Good times. Watch it if you’re reading this & havent yet.

I did not enjoy it.

Went in fully spoiler-free. As soon as Superman was the one calling for preemptive war against Apokolips against others’ objections, I knew this was either a New 52 story or an Elseworlds story. (I guess in a way, it was almost both.)

Anyway, ten minutes in, it was clear this version of history was not going to last past the film’s end. Taking it as a conglomeration of “What would happen if…” scenarios with no real consequences, I found it a reasonably fun excursion through the multiv… hypertim… elsewor… whatever.

Now, I am so far behind in my reading, I have not got to this point in publication history, yet. I’m still mid-N52 in GL lore, and have only read a handful of Convergence or post-Rebirth comics. So I had no reference for this story; it was basically a stand-alone film for me. That may have affected my perception.

Last comment: Rainn Wilson Luthor felt like an odd choice to me. I think non-threatening voice Luthor is something that hasn’t been considered enough. This just felt… a little too non-threatening.

It was decent enough. It’s unremarkable, but that’s true of every DCAMU movie with the exception of The Death of Superman (thanks 100% to Peter J. Tomasi’s script). Apokolips War is perfectly adequate as a closer to a series that was never terrible but hardly ever interesting.*

*The Teen Titans films were probably my favorites outside of the Superman film noted above.

It was EPIC! I wish we could go on forever watching these on THIS site! 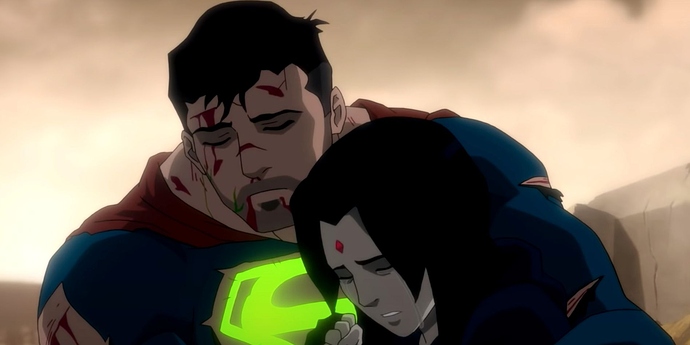 This movie was AWESOME! Live dceu should let the animation team take over. Loved how this one pulled together all of the other animation storylines

Finally watched this. I was not a fan. I haven’t really liked the trend of DC going super dark, violent, and mature in recent years. I’ve always been drawn to the more hopeful, heroic, and optimistic aspects of the DC Universe. A lot of these animated movies have been well done but the violence level and language has felt gratuitous at times.

I wasn’t really digging this movie until I realized that this was likely leading to a cosmic reset via a new Flashpoint. It was clear that this was an intentionally over-the-top dark timeline where they were going to kill characters with abandon. That made the death and destruction a bit easier to take, as I had hope it could all be reversed.

I did enjoy some parts of the movie - Matt Ryan as Constantine is always entertaining. Darkseid vs Trigon was epic! There were some good moments with Raven and Damian, Batman in the Mobius Chair, Constantine freeing Wonder Woman with the lasso, the shocking reveals of the brainwashed Leaguers, etc.

And sure enough, everything was reset at the end. But there was no payoff. We didn’t get to see the better world Flash was hoping to create. I realize that was likely because they’re still figuring out what it will be (and whether the new movies will be connected at all). But the end result was lots of death and suffering followed by the universe seemingly being erased. Roll credits. Not a very satisfying conclusion.

This was so good it makes me want to see Injustice: Gods Among Us done as an animated feature

It would be awesome™️ to see that.

I was totally under whelmed at the trigon darksied fight hell superman got more hits in and beat the ■■■■ out of darksied. Trigon was like here is a slap on the face and another and another. I was super excited i wanted it to be like you hurt my daughter and killed robin only i get to kill robin NOW YOU DIE. Then trigon just beats him to a bloddy pulp and like hulk walks away like puny god. But alas all i got were a couple slaps on the face and the fight never finished they just get sucked up and its over. Like ive seen better fight scenes with hawk and dove and trigon is spose to be like the most powerful bieng. It was just stupid and dumb. Hell krypto in the nes titans show has better fight scenes then trigon in this movie and he is a ■■■■■■■ dog.

This one was weird. I’m not really sure yet if I liked it or not. A lot of my discomfort with it had to do with how it fit in with the other movies in this series.

The story itself was good, but a little simplistic, I thought. It’s basically the story of New 52’s Earth-2 before the appearance of new Flash and GL and such, I think, with some obvious changes that seem to mirror the Darkseid War. I agree with those who would have liked to see more of the New Gods characters along for the ride. Most of the fun of the Fourth World stuff is all the politicking and plotting against each other by the likes of Desaad, Steppenwolf, Vermin Vunderbar, Granny Goodness, etc., and the League using some of those maneuverings to keep Earth out of the crosshairs. Both the DCAU and the Young Justice universes did a much better job with that than this series of movies has done (of course, as long-running series they had more time to do it, so there’s that). The way it works now seems like it’s simply copying the Marvel movie universe with Darkseid replacing Thanos as the big bad.

Also, it seems like this should have been more of a two-movie thing to not feel like they were rushing to clean up this movie series. There is a lot of story that just sort of got pushed to the side - side stories from the Justice League, Bat-family, and Teen Titans movies that were starting to go somewhere and then just got abandoned due to the sudden invasion storyline.

A lot of the issues I have with the movies are just issues I have with the feel of the New 52, to be frank - it’s always felt to me like we’re watching some enormous “slightly-Elseworlds” feeling universe with less feeling and more militarism to it, with the original Superman thrown into the mix as a sort of narrator/witness character. Obviously the movies don’t take that latter facet into account, which is good as it’d be too confusing. But it’s not the same level of fun and great storytelling that the post-COIE world had for me.

I’m a little old school, and I’m still not completely on board with John Constantine being in regular DCU continuity, to be perfectly honest. He’s one of my favorite characters and it’s enjoyable watching him intertwine with the Justice League at times, but I frankly miss the old Vertigo days. I will say that the darker tone of New 52 and this series of movies is a better place for him than… say… the early- to mid-90s era where I did most of my reading, so I’m not too bugged about it.

And to that point, I don’t like a lot of the blood and gore that these movies have had. I don’t think I’m a prude or anything, it just seems a little unnecessary.

Smaller note: Nightwing has always been one of my favorite characters, so it was very disturbing for me to see him go the way he did in this movie - as well as watching the end of Batgirl, etc. Some great characters could have been made better use of, I think.

Anyway… it’s still fun to see these high-quality animated movies come out, I suppose I’d just have liked to see them tie it all up better.