I just saw that JLO is coming to an end in October. It’s kind of a shame because I really liked the concept. But I think it suffered from a meandering storyline that caused it to lose any momentum it may have had. Also, as much as I like the dynamic between the team of misfits it currently consists of, I would have liked to see the team originally advertised. Anyone else have any thoughts?

I pretty much feel the same way. I just really hope Jessica Cruz doesn’t go the way of Simon Baz and pretty much completely disappear after this. She’s way too good a character to be forgotten so quickly (same goes for Simon, too), and she definitely deserves to still have some sort of starring role in DC, whether it’s in a comic series, HBO Max’s Green Lantern show or something else

That’s too bad. I hope Jean-Paul gets picked up as a main character in another comic series.

Overall, I like JLO. It’s a fun space saga with plenty of action and some unique personalities. Not without its faults though (spoilers ahead):

Like I said though, the negatives have not been enough to drive me away from the book. Looking forward to how they will wrap it up and what becomes of all the characters involved. Hoping that in the last few issues we learn how all this ties into the bigger picture with Perpetua and current events.

I’m so hurt by this. I just got into Odyssey. And Outsiders is canceled too. Two big titles on my pull list. I hope Jessica find a new home.

I could be very wrong, but I think a two year run is not bad. I always felt that Justice League Odyssey was meant to tell a finite story. My only qualm would be if these last few issues don’t tie up all the loose ends. Hope the characters find landing spots afterwards in other titles.

You hit the nail on the head about the storyline. I was hoping for an epic space saga but JLO just never clicked for me. I think Far Sector and the recent Omega Men limited is more like what I was looking for.

That why it was doomed. Many readers deserted the title after the first few issues

It couldn’t recover after that

For the past year, I’ve been trying to figure out what made Josh WIlliamson who was writing Justice League Odyssey. The title was unique and fun and I was really enjoying it! My confusion was and still is, why did we leave that title? Why leave a series that was so good before the end of the first arc. What did he struggle with? I finally found the answer. Never before reported as far as I can tell after a good 30 minutes of checking. Let’s call this a DCU Exclusive!! I was listening to AIPT C…

Simon Baz should become a member of a retooled Darkstars in a few years.

Jean Paul isn’t mentioned in the final solicit? I think I missed 1-2 issues somewhere and lost all track of the story before it became a Jessica Cruz book. I am not labeling that as bad, I just think the book took a hard left turn and I’m disappointed that core characters were just sidelined. I kind of like the current team of characters, but I think Azrael, Starfire, and even Cyborg got shuffled off. Plus, what I think happened to them is pretty major and doesn’t seem like it will ever get explored.
I kind of remember it as: went to investigate the zone, trapped in zone, Darkseid trying to gather a weapon, characters were weird gods, (complete blank), Cyborg taken over, Jessica Cruz and randoms fight some thing that wants to kill Darkseid, obscure character wants to rewrite time? I think Azrael and Starfire might be Darkseid minions and get drawn in the background every third issue. Feel free to judge me and set me straight.

Sad to see it go, but the final cover by Jose Ladronn is a thing of beauty! 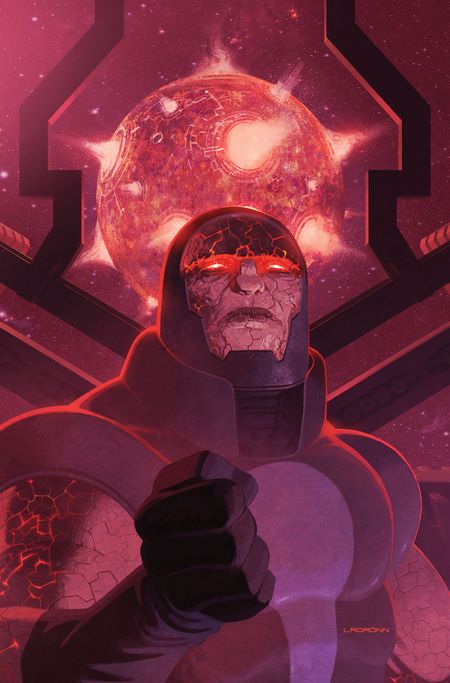 I hope Jean-Paul gets picked up as a main character in another comic series.

That right there is the entire reason I opened this discussion.

Are Starfire and Azrael alive? I’m not up to speed.

If I remember correctly, both have been killed. But the storyline deals with time travel. So who knows what could happen.

It’s not bad by any means. But it just feels like it could have been a good long running book with multiple stories. I like where the story is going but would have liked for it to resolved within this two year run as opposed to dragging on.

Jessica is such an interesting character and I hope they find a great place for her. She has so many stories to tell.

Unfortunately I think Grant Morrison has control of the GL series and I don’t think he has any plans for any lanterns other than Hal. So here’s hoping she joins a JL book or something else.

Yeah, maybe she’ll join one after the new Metal is done. Some think a soft relaunch will happen after it ends.

I remember thinking it sounded interesting, getting the first trade when DCU didn’t have it all the way up, but never really finished it. So I might have been part of the reason why it’s canceled, to be honest.

JLO was a series I was ready to go all-in on, and after Seijic left (after having to redo a ton of work) and the first arc petered out, I dropped it… Only to hear from fans that it jumped back to life immediately afterward. I took a leap of faith on it and, yeah, one of the better team books each month.

Sad to see the team break up, but hopeful that Jessica lands on her feet in another series and not in the same limbo as Simon, as others have observed. Maybe they can be Jo Mullein’s backup in Far Sector?