If possible, I would like to read all the issues of Cassandra Cain’s Batgirl.

Wonder woman is very thin on what is offered

I feel like there are alot of obscure titles and characters that alot of people are unfamiliar with. I think adding The Movement written by Gail Simone would be a perfect addition to the streaming service. 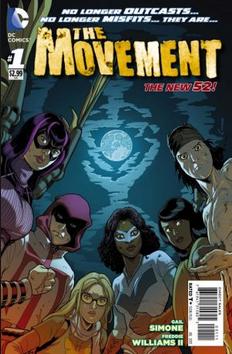 Batman: war games would be awesome!

@TheDemonEtrigan said it best!! His reply is in this thread. At a minimum make everything post new 52 (including new 52) completely available and everything pre flashpoint can be rotated in and out. I am in full support of us. Overall we just need more access to the comics and FULL runs. I had SOOOO much from the New 52 era that I was really looking forward to jumping back into once the app launched.

Overall, I have faith in DC. They are doing amazing and look at how much have already changed thus far since launch. They’re definitely listening to us so we need to continue to have patience. If anything we should all be motivated by what’s to come and EPIC this app is about to be.

Question for the Mods: are we to assume that since nothing was added last week to replace Dark Victory and there has been nothing announced for this week that the library is pretty much set as is until a final decision is reached on how to fix this part of the service moving forward? I appreciate that you are commited to improving the user experience but going on a month with nothing new and only vague promises of something better to come it feels a bit like the comics portion of DC Universe has been put on hiatus.

Bumping this up as I strongly agree with Etrigan (not a sentence I ever thought I would type. I mean, who goes around admitting they agree with a demon?)

I think more transparency would be nice, or at least a date when we can expect changes

You guys obviously that is not the real Etrigan. Dude didn’t even speak in rhyme. Seriously we need an update asap on the fate of the comic section.

Especially now that the promise of more comics is gone…

That has me worried that even the promise message has been removed.

To say the comics are pretty much set is accurate. Although nothing is being added, you can also say that we are also no longer subtracting. We may have some brief exceptions made until a larger announcement is made, but currently our focus is on a longer term solution to our fan’s requests.

Please remember: Updates and strict dates are not released until the ink on the details is dry, because information announced prematurely can greatly jeopardize progress and initiatives from a corporate and legal perspective. Generally speaking, the bigger the company, the more diverse their interests, the more careful the sharing of information can be expected. The holidays often slow the wheels considerably, as well. Trust is earned, so at this time we will simply as for patience

An answer of such perfect candor,
'Twoud truly be a shame to slander.

Though lack of comics makes me mourn,
Towards DC I bear no scorn.

Enough have I to bide my time.
I hope that all enjoyed this rhyme.

Given how much people complained about rotating things out, I think this is probably a more or less good solution until some update to try and satisfy peoples complaints is made. Most of the rotating was the high profile ones like New Teen Titans, Identity Crisis, Long Halloween, Death of Superman, etc. Not surprisingly more people were interestred in reading, which led to a perception everything was going in and out in 2 weeks or so, which lead to a lot of complaining. Honestly, I thought the idea of around 3000 set comics or so, with high profile comics rotated out was not a horrible idea, (although slightly longer time limits would have been nice). but it was clear most people were not liking that system. So until some kind of attempt to compromise is made, it is probably just as well. Putting another high profile run or storyline on seems to just bait for more complaining it is up for a limited time.

Yeah, I was absolutely okay with rotating titles focused on whatever was going on, like the Titans premiere or Halloween. They were just being rotated way too fast. But I look forward toward whatever is decided! Of course, no matter what is decided you’ll have a lot of complaining…just the nature of message boards, really.

@TheDemonEtrigan
ROUND OF APPLAUSE
Breaks into tears

Thanks for the assurance Applejack. I feel better already

One thing I’m mad about is the random selection you have for the forever evil villains month event. You have the ones for batman, detective comics, aquaman, and green arrow but there were a ton more like action comics, batman and Robin, and batman the dark night. When will these be added?

What should be added? I’d like everything before Crisis on Infinite Earths and for a few years afterward (say until the mid 90s). This old content seems reasonable as it’s often not available anywhere except in out of print collected volumes or maybe not at all. Where do we go to get the old Phantom Stranger comics, for instance? Or what about the Blue Devil comics? Honestly, complete runs of the main comics up to the mid 90s (Flash, Green Lantern, etc) would make a lot of really loyal fans. Even if you bumped the monthly price a bit I think you’d find people happy to pay it to get access to all these comics.