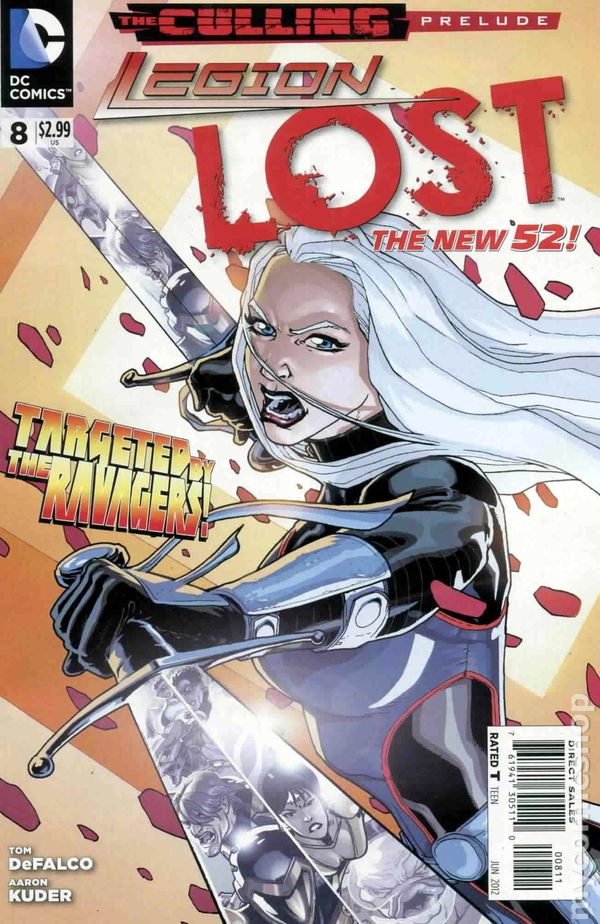 This week just before Thanksgiving we sit down to a banquet of Legion tales that were among the very last to be spun before the 6 years of silence! Let’s enjoy the second of three heaping servings of New 52 Legion featuring the major New 52 teen crossover event:

TEEN TITANS ANNUAL (2012-) #1 The Culling’ part 1! The Teen Titans take on the Legion Lost one mile beneath the Antarctic in the chamber of horrors known as the Crucible! .DC Universe

SUPERBOY (2011-) #9 The Culling’ part 2 Superboy vs. Rose Wilson—Round Two! Plus, the shocking debut of the all-new Warblade!
DC Universe

LEGION LOST (2011-) #9 The Culling Part 3. Even the combined powers of Legion Lost and the Teen Titans won’t be enough to stop Dark Harvest and his minions from committing mass murder. DC Universe

TEEN TITANS (2011-) #9 The Culling’ part 4. The Teen Titans and the Legion Lost duke it out with N.O.W.H.E.R.E. and the madman known as Harvest in order to stop the slaughter of innocent children. DC Universe

LEGION LOST (2011-) #10 The team must decide which fate is worse: staying in the present to die…or returning to a future that may be totally different from the one they left behind! DC Universe

LEGION LOST (2011-) #11 The team must decide how to stop their future from being destroyed by their actions in the present, as the deadly battle with the Metamerican rages on! DC Universe

Questions: Give your general reactions below, and add any questions that puzzles you here as we are again using the Wiki format!

This should be interesting to get into and discuss, because I remember this was…a story that happened.

Well, I mean…it’s got Rose Wilson and a Superboy from Cadmus, right?

I dug The Culling, so I’m looking forward to this.

I liked this storyline too. I read it on here not too long ago. Way too jumping between comic books on an app for it to be truly enjoyable. I’m grateful that you put all the links up here.

I just opened up that first book to read, came back here at comment about how calling a character Agent Psykill just seems ridiculous. In a universe filled with characters characters with names that one stands out.

Also… Forgot how much I enjoyed the art on Legion Lost.

@Meisaj It sure is easier to read these crossovers between titles when you use physical copies, great point! Too bad the app doesn’t have a special link to hop along to the next crossover issue, but for sure that’s why I include the links here to assist. Personally, I also use the personal Lists function here, since searching from the top of the Comics can be a tad frustrating for some titles.

Agent Psykill, maybe a code name to strike fear in opponents I guess? The wild chaotic fictional landscape of New 52 with 52 literal titles all launching at once had some very very dark nooks and crannies. Superboy, Titans and Legion Lost were really ominous warnings of where our current genetic science tech can quickly lead us if we aren’t careful.

Ok. General reaction. I like the idea of the culling, but man I hated Harvest as a villain.

His dialogue was awful.

Other than Harvest… It was very cool to see the Titans and Legion together. I always like when the Legion references hints about knowing people’s past.

Scott Lobdell has got some great movie credits under his name like Happy Death Day and fun stuff like that. But for me personally, he is not my favorite dialogue writers. I’ve spent money on plenty of his stuff because he does do some really good concept storylines, but I’ve never run to him for things like character development or great dialogue (I’m avoiding here saying he’s not a good writer. As one of my best pals here has pointed out to me, we probably have some of these writers reading this stuff that we state here in DCU Community),

I generally like Scott Lobdell. I liked his X-men in the past. Age of Apocalypse is one of my favorite cross-overs of all time. And I really liked Happy Death Day.

I just think Harvest is not a great villain, and his dialogue reflects it. It is kind of repetitive and expository. Not all villains have great depth, and that’s ok. Harvest unfortunately comes across as very one dimensional - especially for a ‘main villain’ in a crossover and the defining villain of this Teen Titans series.

In general, I liked Lobdell’s run on the Teen Titans - aside from this version of Bart Allen. He was just too far of a departure from the Bart Allen I loved. His Superboy run was great too, although it got very confusing / convoluted towards the end.

On the Legion side, man I like the character designs. Tellus is fantastic, as is Gates. It’s easy to get drawn into these characters, especially with a small focused cast.

I tend to like Lobdell on most things, especially his X-Men and DC work.

Regarding Harvest, he may be a bit one-dimensional, but he is creepy, and a perfect character for McFarlane Toys to bring to life in action figure form.

Ok. I will absolutely give you that. He would make a great action figure.

McFarlane would have a field day with a Harvest figure. I hope it’s under consideration, or will be.

I think I saw something on DC Daily about McFarlane Toys doing more collaborations with DC, so it’s not impossible! I get the feeling Harvest might be a little lower on their list of cool action figures.

Anyway, finished the prelude issue in LL last night, going to start into the series for real now.

@Jay_Kay McFarlane has the DC collector level toy license from next year until at least 2023, so I hope we can see a Harvest figure from him. He loves doing the odd and grotesque stuff from time to time.

Maybe some Legion and Culling figures too. fingers crossed

First issue, the annual, way to just thrust us into the action. Maybe it wouldn’t feel so half-explained if I had read the previous issues beforehand, but I kinda doubt it. 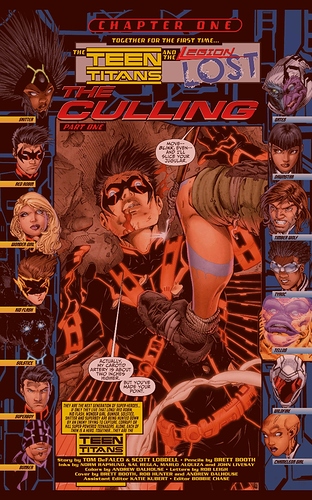 I love it when they do the whole “floaty heads” roster thing. 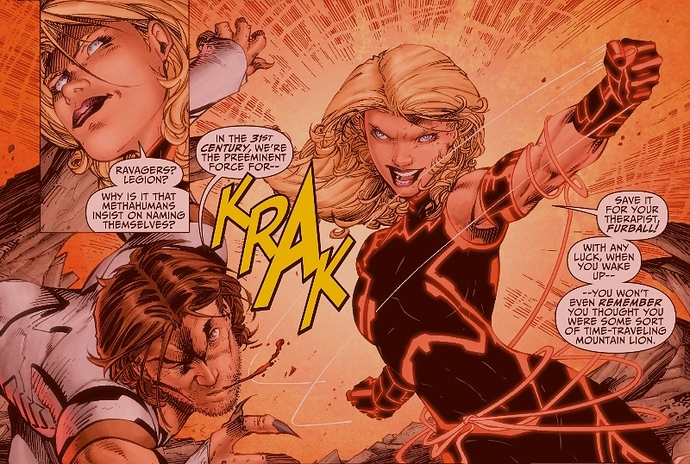 One of the fun things about the "teams of heroes meeting/ fighting for the first time stories is definitely the smack talk. 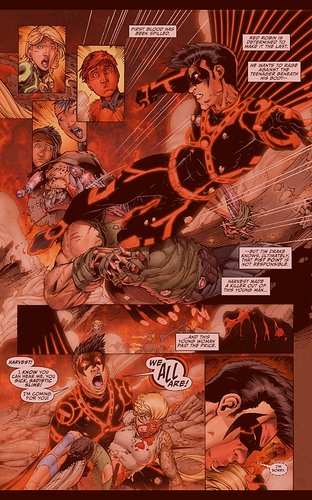 I remember when this first came out a big thing a lot of readers didn’t like was how they introduce the YJ animated series Artemis in main line comics for the first time… only to kill her off pages later. Definitely feels like a waste. 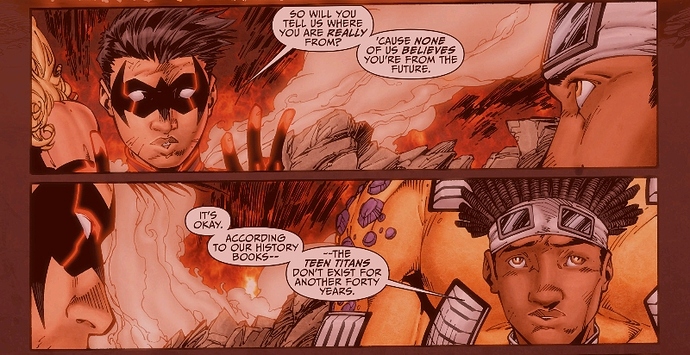 Like someone said, it’s always cool to see future characters do hints like this. It’s a little more wild than what I would like, but I did like when this came out little things like this to make this New 52 timeline feel different.

Yep just as dark as I remember it, we’ll all be in comic books therapy once we’re done reading this one…

First, I forgot to add in the Annual that the backmatter for it wad pretty cool. Say what you will about the story, but they did put some thought in there. 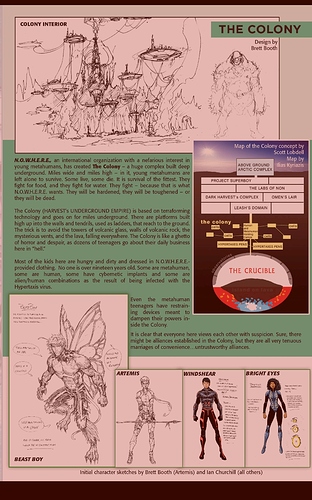 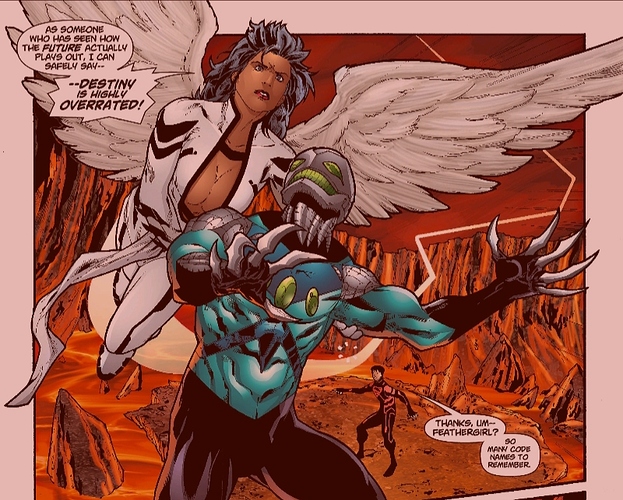 First, funny how on the same week Acquired Tastes Book Club gets into Wildstorm characters, we get one here in Warblade.

Second, it’s nice that Harvest keeps some of these characters’ aesthetic in mind when designing their Crucible outfits they wake up in, such as Dawnstar’s need for a plunging neckline.

(Also, it’s odd to see her without a headdress.)

Third, I’ve totally been there, Superboy. 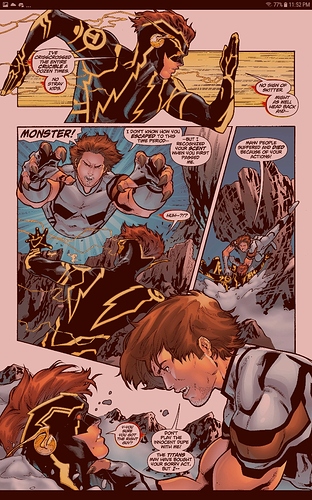 First, thus may be the last time we hear about Skitter, at least for a while.

Second, while I don’t remember it ending all that well, I remember being somewhat curious about this mystery with Bart going on at the time.

The new 52 Bart is actually imitation Bart as you indicate …here’s a Wiki on it. 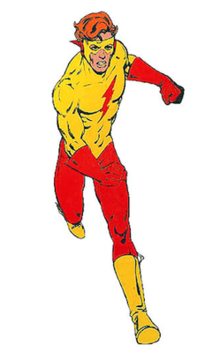 Kid Flash is the name of several fictional characters appearing in comic books published by DC Comics, originally created by John Broome and Carmine Infantino, as a junior counterpart to DC Comics superhero The Flash. The first version of the character, Wally West, debuted in The Flash (vol. 1) #110 (1959). The character, along with others like the first Wonder Girl, Aqualad, and Speedy, was created in response to the success of Batman's young sidekick Robin. These young heroes would later be spu...