The once a month Wednesday [Legion of Super-Heroes Fan Club] Watch-Along, 2 short episodes = a fun way to celebrate the halfway point of the week!!! Join the Legion Fan Club as we celebrate an optimistic vision of the future!

Where: Right here on the forums! In this thread! In the comments!
When: Wednesday October 2nd 9 PM EDT / 6 PM PDT (MST) / 7 PM MDT / 8 PM CDT /
We’ll launch the recordings in perfect unison like a precision marching band at the appointed time! 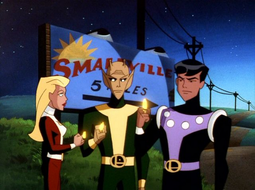 If using Roku Wednesday, I suggest saving these two recordings to Favorites so you can easily get to them via the Roku app…

The episode of JLU that features the Legion is S2: E10 “Far From Home”, which is on the service.

*overhears someone in the bsckground say “I’ll have what he’s having.” *

For sure on a different month, young Vroom… we don’t want to do more than two on a weeknight when everyone has to get up for school the next day!

(this is a two-year mission, I promise we’ll get to this before the 100 page Holiday comic)…

@Don-El Sounds good. Holding off on “Far From Home” just gives us more animated Legion goodness to anticipate in the future, which is nice.

Let’s keep digging for more Legion goodness in the animation too, maybe something else is hiding in there…

And for those of you still using flight belts-- get with the times! Flight rings are the future!

I almost forgot! But I already took all my sleep aides! If I don’t make it, try your best to have fun without me!

Sorry I accidentally traveled through time

In Brightest Day, In Bl-whoops! Wrong franchise that spotlights rings.

puts out a spread of snacks

Does anyone know around what time the Legion episode starts? I’m not caught up on StAS.