It is our sincere honor to welcome to the stage Benjamin Le Clear, Official DC Archivist, Keeper of the Comic Books & DC Lore! Watch his latest appearance on DC Daily to learn even more about his fascinating world.

If you just can’t wait till Wednesday, be sure to visit DC Tales From the Vault, a video series where Benjamin takes us on an intimate tour deep into the archives to explore your favorite characters, creators and more.

Please try to limit the number of questions asked to 1-2; this way, everyone has a chance to get a response in the limited time we have

Add your questions about the archival process, DC history and more in the comments below, and come back at 3pm PT/6pm ET on Wednesday, May 13th to read Benjamin’s answers LIVE!

15 Likes
Community Events Calendar
OFFICE HOURS: Ask DC Universe Your Questions Every (UPDATED) TUESDAY Night!
To the ones who have read the DC comics from 1935 to 1940, how mature are they compared to the ones from the Silver age?
Community Event Highlights: Week of 5/11: Q&As w/ Harley Quinn Showrunners, DC Comics Digital Archivist, & Geoff Johns
Lolalu May 13, 2020, 10:00pm #2

Hi Mr. LeClear! Hope you and your family are safe and healthy right now!

Mr. Le Clear,
Hey thanks for stopping in. What DC comics issues are missing that you’d really like to get your hands on?

You seem like you have an amazing job. Do you ever just stop and stare? I think I would find myself just gazing in awe on historical comics sometimes if I was in your position.

There’s a question that keeps getting brought up recently and I’m curious to get your thoughts: the very first published comics, were they targeted to a specific audience, such as adolescent boys? Or was it more of a “let’s publish this and see if anyone will buy it” sort of situation?

Thank you very much for taking the time to do this Q&A. I’ve heard that DC does not currently have a complete archive of every comic issue they’ve ever published. I’ve also heard that, in some cases, the archives do not contain copies of some issues in good enough quality to be digitized. Are both of these things true? If so, is DC making active efforts to obtain copies of the missing and poor quality issues, both to include them in the permanent archives, and so that they can be digitized to be enjoyed by future generations? Thank you!

(I don’t know if that counts as my two question limit, but if I can sneak another question in here, it would be: What do your day-to-day tasks entail? Thanks!)

Interesting questions. I do remember that George Perez HC took so long for the Justice League America because they had a hard time restoring the original comics.

Thank you for doing this, Mr. Le Clear!

I’m really interested in the early, pre-Superman comics. A few of the characters from those days, like Slam Bradley, the Crimson Avenger, and Dr. Occult, do occasionally show up in current comics. Are there any other great characters lurking in that era that you would love to see brought into modern comics?
2. What’s your favorite issue in the entire DC collection?

Hello Mr. Le Clear,
I’d be really interested in reading Real Facts comics that’s based on a true story, what’s the history behind it and any chance for it to be digitalized on here? I sure would love to read it. Thankyou for your time.

How much of an interest is there at the DC offices in preserving the non-superhero comics of the 1930s-1960s? I’m especially wondering about classic comics that were targeted toward a female audience, such as Girls’ Love Stories. With the industry’s long-standing and often justified reputation of being a boys’ club, I’d think it’s especially important to preserve some of the books that appealed to young girls during the Golden Age, when “91 percent of all girls between six and 11 read comics,” according to an article from The Atlantic.

Thank you for taking the time to answer questions from the community!

My question is what item in the archive do you keep coming back to for sheer amazement?

Hello thanks for stopping by.

My question is what’s the funnest part about being an archivist?

It’s a real honor to have you here! I have so many questions, but I’ll keep it down to two.

Can you tell us about the state of the archives when it comes to libraries acquired by DC from other publishers? Fawcett, Quality, Charlton, Prize… do they all have a place alongside the DC originals?

Second, a very specific Question: in 1983, for a brief window between the Charlton and DC eras, AC Comics published a oneshot featuring the Charlton hero staples as the “Sentinels of Justice” called “Americomics Special #1”. Captain Atom, Nightshade, Blue Beetle, and The Question were all there. 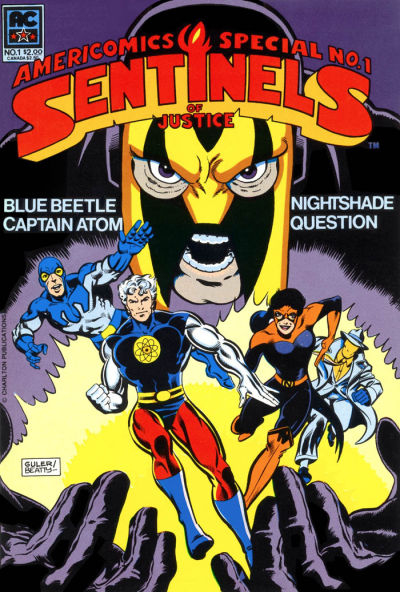 Shortly after that, DC started publishing the Charlton heroes themselves. My question is: who currently owns the publications rights for this issue? Is it DC, or some modern descendant of AC Comics? I know DC has published the earlier, Charlton stories in the past, as part of Action Heroes Archive Vol. 2. Do we have our hands on the Americomics Special?

Questions for Benjamin Le Clear: Do you consider yourself more of a historian or a creative? What strengths does one need to become a comic book archivist?

Hi Mr. Le Clear. Growing up, DC Comics were some of my favorites. Did you have specific titles that were your favorites?

1.) What are some of the most important responsibilities of an Archivist?
2.) Who is your favorite none DC superhero?

Hi, thanks for doing this Q/A with this community!

What is unique about the genre of comics and how they have changed pop culture today?

Hi,Mr le Clear thanks for the q&a. Would you be interested in doing a show on Dc Universe telling the stories of what it took for dc to acquire some of the rare books? I know I would find it very interesting to hear the stories.