So I haven’t read a lot of Superman comics, but I have read plenty of comics that have Superman in them. I was recently reading Nightwing year one and was wondering when did Lois find out when Clark Kent was Superman?

Does anyone have an official answer?

Is it something that has constantly changed?

But that doesn’t really matter because the crisis right? Or am I getting the earths wrong?

Triangle years… I wish all comics would tell us the exact reading orders on the cover like the triangle used to in Superman. One of comics biggest problems is how the timelines and years don’t add up, like Tim Drake being 15 for like 6 years. I wish comics would be more accurate about the timelines and not pay attention to it matching the current years time. Comics seem to always want to take place in the same year it is released which messes up everything. Robin can’t be 15 for 3-4 years.

Notably, this issue was #6 in 1991, and 1991 was the first year to have the triangle numbers. In other words, the short answer to your question is that Lois has known Superman’s identity since the start of the Triangle Era. (And since you mentioned Tim Drake, I’ll note that it was pretty much concurrent with the Robin miniseries, so you could also say that Lois has known for as long as Tim has had his 90s costume.)

Ha. This depends on which Crisis and which Superman. The married Lois and Clark from Earth 2 survive Crisis on Infinite Earths. Their survival is part of the plot of Infinite Crisis. They both have other significant incidents on New Earth.

Whether the existing Superman is the same Superman as the Superman in Action Comics #662 is up to you.

If we’re talking the original movies series, she learns in Superman II (1980), but then he uses super-hypnotism to make her forget at the end. Though… she does seem to kind of remember in Superman IV (1987).

If we’re talking Snyderverse, then she basically knows from the very beginning in Man of Steel (2013).

The thing was, when I saw the Cover to Action 662 my entire thought was
:Well, how’s this going to end?
Super-amnesia kiss? rewind the day? Dallas dream explanation?

Then I opened up the issue and saw this! 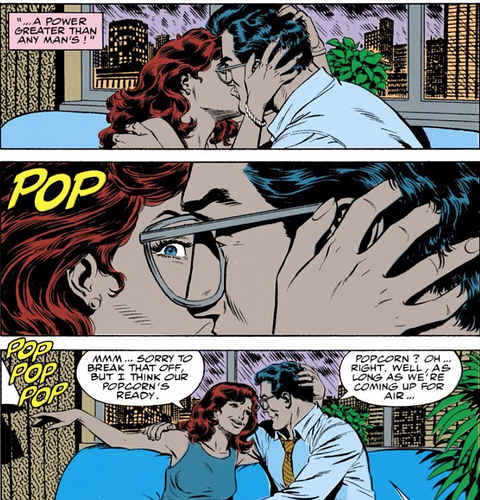 I was floored!
Lois had always been famous for not giving Clark the time of Day (This was a few years still before Lois and Clark aired)
Of course, this meant two things…
One. all bets were off on there being an undoing to this historic moment!
Two…I had to start buying back issues and see how we got here!

Keep in mind, I had been away from Super hero comics for about six years until A death in the Family came up in Batman. Then I didn’t start reading Superman until…well until I saw this issue! (although I did skim through Man of Steel #3 (but that was just a Batman team-up appearance with magpie and it had no details on the Lois and Clark situation)