With the promotion of Marie Javins and Michele Wells, it looks like DC is going to really lean heavy into the YA Novels and scholastics versus super-heroes.

Will DC farm out the super-hero side? Will they just stop super-hero comics all around?

Everything is falling apart. 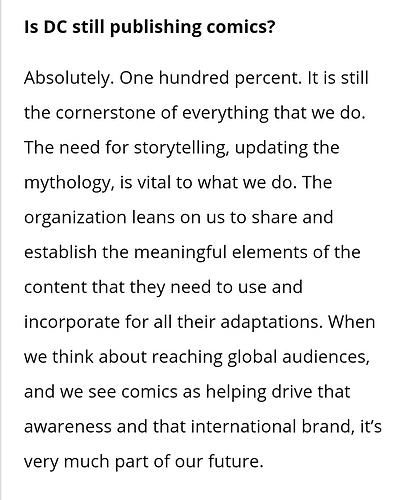 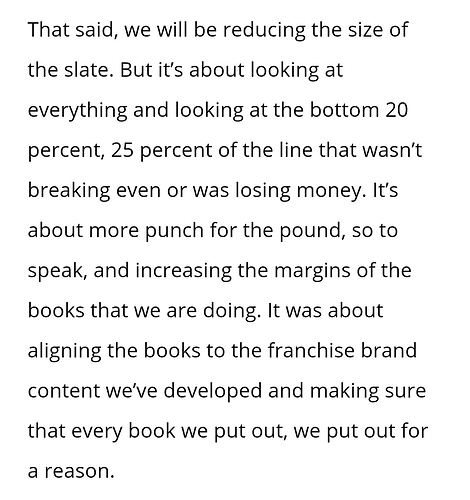 Javins and Wells were incredibly successful in reforming DC’s underdeveloped line of kids’ books into a huge asset. I‘m eager to see if they can do the same for the main line.

Focusing on young adults and children is the only real way to make their readership grow. The average comics fan is older at this point, and like it or not, set in their ways. Having titles geared towards younger audiences is a great idea in my opinion. It’s a good way to promote literacy and get kids and young adults excited about the comics as a medium again.

That said, I don’t think every title should be geared toward children or young adults. Titles geared toward a mature audience will always have their place, as long as they are clearly labeled as such. Perhaps keeping up with the ratings system, and even promoting it, can help customers and families make informed choices as to what may or may not be appropriate for young readers based on their maturity level.

Childrens and Young Adult titles could be marketed toward Scholastic and local stores such as big box retailers and school bookfairs. More mature titles could still stay the domain of online stores and local comic-shops (which younger readers are less likely to frequent) It might mean a different approach, but that doesn’t necessarily mean it can’t work as well if not better than before.

I mean for example:

A young adult series of graphic novels, or even simply regular novels based around the new Stargirl series and it’s particular mythology. I think there would be a audience for it, particularly among young female viewers, who gobble up fanfic like candy.

I don’t know where you’re getting that information from, but it’s simply not true. DC’s new young reader and young adult lines are their most successful publishing effort right now. They top the graphic novel sales charts every month.

There is another thing to consider when it comes to trade paperbacks and omnibus editions. Instead of dealing with Diamond or similar companies, they should look for a printer that can work with them on a print-on-demand basis. Self-published authors like myself do it all the time. It might mean slight delays of 1 to 2 days for books to print and ship out, but it would eliminate the waste of unsold stock. It would also cut down on price gouging if they made out of print omnibuses available that way, print to order. Comic shops could still order in physical stock, and it would be easier to make a wider variety of things available without as much overhead that way.

Think of how many more omnibus editions we could have if the only expense needed up front was formatting them for print. As it sits now, they only seem to release “safe bets” they are sure will sell. Personally I’d love an Infinity Inc Omnibus, but think there is a snowballs chance I’ll ever get it with the way things are done presently.

That sounds like anecdotal, outdated evidence to me. The market has changed… and is beginning to shift to general bookstores.

That’s precisely why I think going to a print on demand model for trades and omnibus editions would be more advantageous in the long run. @dogwelder9

I mean with as much as they’ve already digitized the back catalog for this site, all that they’d have to do is format things for print. Imagine being able to order trade paperbacks or hardback editions of your favorite series that are already on this site, and in a week having a hard copy in your hands to enjoy. It would be fantastic. I would buy so much stuff if they would do that.