For me I’m very excited to see what DC does on the 3rd wave of Comic Movies. Now that the Marvel cycle is over and WB seems to have found a rhythm, I CANNOT wait to see some of these upcoming films. What’s your most anticipated? Mine in order are:

1: THE SUICIDE SQUAD: The original is, I think DC’s greatest missed opportunity to establish themselves and with that said I still like it for what it delivered. James Gunn taking over and correcting the mistakes of the first (hopefully) while maintaining the elements that worked (VIOLA DAVIS!!!) I’m so excited

2: NEW GODS: Ava Duvarney is a visionary, and I only hope that they find a way to get this thing up and running in production before Marvel’s Eternals which is a crummier Jack Kirby Rip-Off of his own much better work. Miracle, Barda, NUFF SAID

3: BIRDS OF PREY: Cathy Yan is a relative unknown but i like what i’ve read about it and while i’m not huge on Harley, i love the rest of the team and do like any idea that sets DC Movies apart for what makes the DCU unique

4: WONDER WOMAN 1984: This is the one i feel the most trepidation about, as I loved the first WW but I don’t know how i feel about another throwback film. Maybe it’s the delay talking though…who knows

5: AQUAMAN 2: I liked Aquaman and wasn’t disappointed at all, but i feel like i maybe saw everything i know and like about Aquaman tried in the first one. They threw it all in! So i’m optimistic about the next one but not entirely sure i even know what more i’d want…Further, I think James Wan and i just have very different sensibilities (AGAIN I DID LIKE AQUAMAN QUITE A BIT)

6: JOKER: Cautiously optimistic and the pedigree of those involved looks great but it just feels like the wrong movie at the wrong time honestly.

7: THE BATMAN: Honestly I’ll believe it when i see it, I hope it works but, like spiderman, i’ve gotten my batman fill so any further movie is a bonus

The best of the Rest; Movies that are in development but no major casting or directing choices have been revealed

JUSTICE LEAGUE DARK: Someone take this over and do it!!! No super hero franchise but Dr Strange (barely) has dealt with Magic

GREEN LANTERN CORPS: Whoever GREENLIT that original version should lose that power. THis is one of the best corners of the DC Universe and I hope to christ they fix it.

BLUE BEETLE: Come on DC give the world its first Latinx hero!!

DEATHSTROKE: DC is blowing an opportunity to make a mid budget movie with a pretty big star and lots of fan interest. Hope they pull this out of Turnaround

FLASHPOINT: I’ll believe it when i see it. One thing all Superhero movies have taught me up until this point is super speed doesn’t translate to screen. X Men uses it as a gimmick, the Justice League doesn’t really sell it and Avengers was blah…If any visionary could make this work and get this project off turnaround I’d be so grateful.

Batgirl, Nightwing, SuperGirl are whatever to me. I’d be more enthusiastic if he hadn’t seen so much of this type of movie mixed with the fact that I just really doubt they’ll make these without Batman and Superman being firmly established. PROVE ME WRONG DC. PLEASE 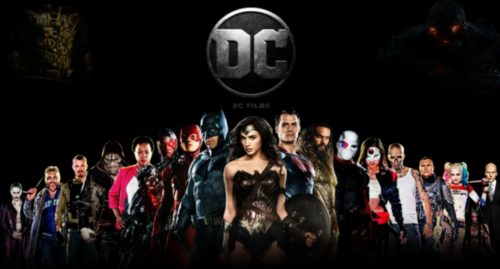 I’ll cosign your list. SS is definitely #1 because of Gunn. I really, really hope he brings back Jai Courtney!

But other than that WonderWoman and Aquaman

Joker movie. The trailer sold me like it sold many others. Joaquin is a talented actor.

The Batman. Matt Reeves has me excited, his Planet of the Apes reboot trilogy was so phenomenal and underrated imo. Hes a seriously talented filmmaker and his experience with realistic CGI makes me excited.

Any Superman Movie. I just want to see Superman done right. You can keep Cavill just give him a good writer and director.

Batman. because its Batman!

Wonder Woman ‘84. The first film was so well-done I’m anxious to see if the sequel can maintain the quality.

James Gunn’s Suicide Squad, every news report is getting me more hype for it; also LooseNate you forgot to put The Trench movie on the list.

@LooseNate, throw in Shazam 2 and whenever/whatever the next Supes movie and I agree with your list.

As long as WB/DC doesn’t try to copy the folks over at World Domination Mouse House. And that goes double for this streaming service.

I mostly want to see some movement on Man of Steel 2, Batgirl, Nightwing, and The Batman.

I’m happy with the Flash CW show right now, so they can take their time getting Flash’s movie right. Wonder Woman 2, Aquaman 2, Shazam 2, and Black Adam are all films I have warm expectations for and feel both relaxed and excited after strong jumping off points with their first films. I liked Suicide Squad in some ways and rolled my eyes at it in other ways, and Birds of Prey looks no different (if actually more the latter, sadly), BUT… James Gunn’s Squad film has me VERY giddy so far. Looks like it’s heading in a sweet direction already. Grateful to have him.

New Gods has tons of potential… Of the projects I feel have kind of fallen into the ‘hope they’re ever going to actually happen’ zone, I am desperate for them to re-hook Guillermo del Toro for JL Dark, and Green Lantern painfully deserves a majestic comeback and a bigger fanbase.

Here’s the thing. DC will always be behind the mouse. STOP PLAYING CATCH UP! WB/DC, you have a beautiful opportunity with this service to bring your universe home to a stable platform with built-in fan base. Marvel’s graduated to phase 4. DC is still potty training or at best learning how to tie their shoes in the cinematic world, which is CRAZY since all supe movies prior to spiderman (tobey m) have been DC.

Proposition: monthly Justice League show that could tie into the rest of your series, or monthly tale of one of major characters, you know much like your monthly comic issues. Not like your short on storyline and I believe the fans would be just as committed and true to your efforts to bring quality of life to the dc universe as you have sought in the shows you have green lit so far.

Soooooooo much potential to be flushed away in a theater stadium. Major movies force compromise . The Accountant is the most dangerous villian in any Comic Hero’s life.

Dc needs to gives us a good mix of top tier and lesser known properties for film and tv. Yeah aquaman was good but how bout a cave Carson, or Jonah hex(ignore that first movie) film. I love Doom Patrol so how bout an inferior five or shadowpact show. Just some ideas.

Birds of Prey should be interesting. Shazam looks pretty cool…I think Im the only one that thinks The Joker looks like shit. It looks like Ted Bundy or some kind of serial killer deal…been waiting on that Batman/ Ninja Turtles…i know thats gonna be awesome

@mobbgoblin Agreed on Joker. It just feels like some weird 4chan thing to me honestly. Though I’m encouraged by the new Batman casting since i’m back in this board