My Idea for How to Fix the Toyman

I’ve had this idea in my head for awhile- shared it yesterday with @American-Alien, thought I’d also share with you guys, see what you think.

Geoff Johns almost had it with Toyman’s backstory- 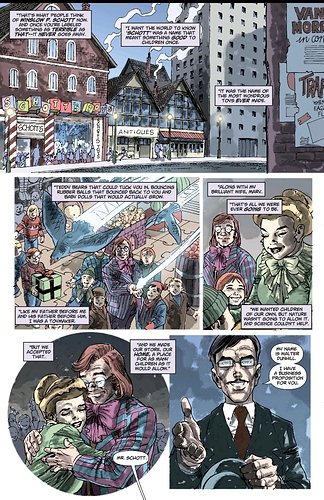 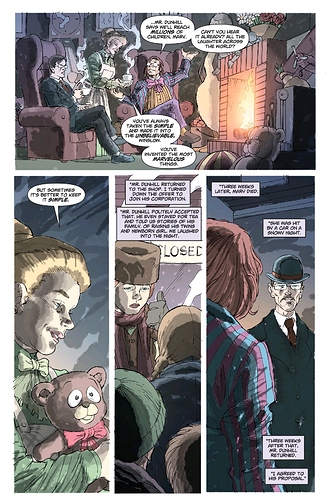 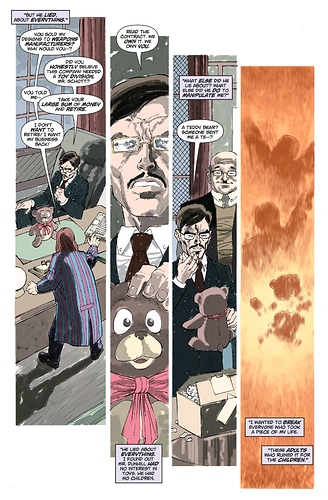 But ‘man goes insane because his company is stolen from him’ isn’t relatable.

Here’s the change I would make- he actually had a wife. They actually had a son. The son dies from choking on a hazardous part from a toy Winslow’s company released, against his wishes. His wife leaves him, and he goes insane from the guilt of being partially responsible for the death of his son. So when he attacks Superman in this version- 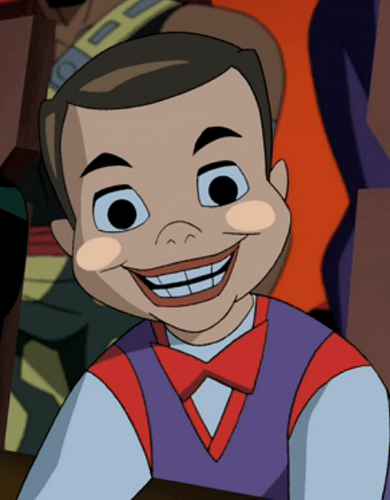 -it’s his broken mind controlling a robot version of what he imagines his son could have been. And he doesn’t hate Superman- he hates that Superman saves people who aren’t worth saving.

I imagine also, that early in his career, he worked alongside men like Niles Caulder, Will Magnus, T.O Morrow, and Silas Stone but broke away to make toys for children, instead of making weapons. The machines he makes are ultra advanced, and no one gains that ability on their own. He would be especially interested in Robotman, and the ability to transfer a human mind into the body of a ‘living action figure’.

After the accident, he would do this more and more to escape reality, using a helmet he plugs his mind into to control the robots he creates. He can’t bare to look himself in the mirror unless he’s pretending to be something else. Maybe his sons favorite toy was one he passed down from when he was a child. An old marionette doll his father gave to him… 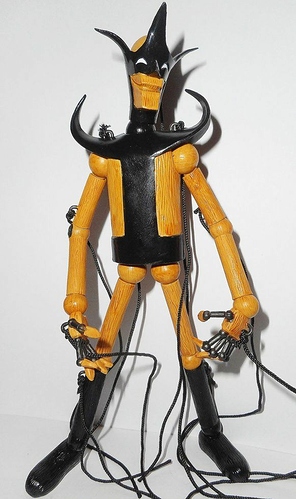 In the 90’s, the Toyman was responsible for the other greatest tragedy in Superman’s life to that point, the death of Cat Grant’s son. 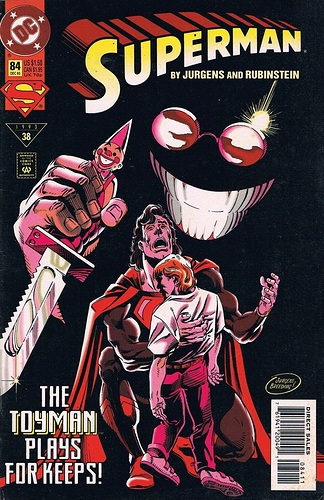 And in the Justice League animated series, he was briefly responsible for the “death” of Superman 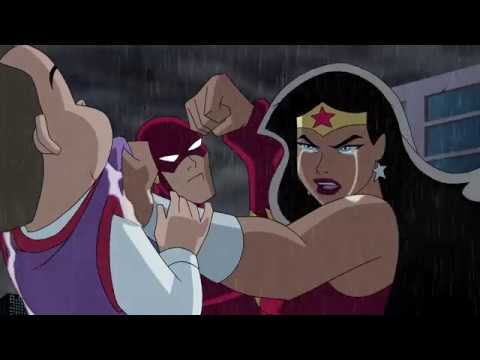 So when taken seriously, he can be a serious threat. The only thing I think he ever needed was proper motivation.

That’s a pretty neat idea. The only time I’ve really been interested in the character was in S:TAS, if only for his creepy look and demeanor.

In this digital first comic by Robert Venditti, they use it. Not sure how in continuity these digital firsts stories are though because Bendis just had the Toyman decide to drop being a villain when Clark revealed his I.D… 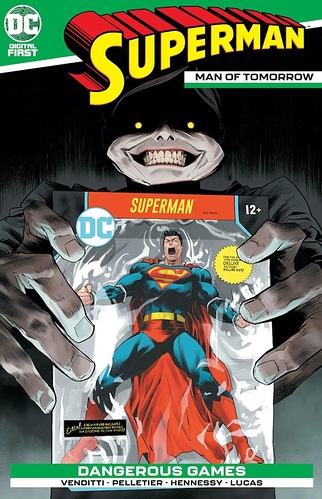 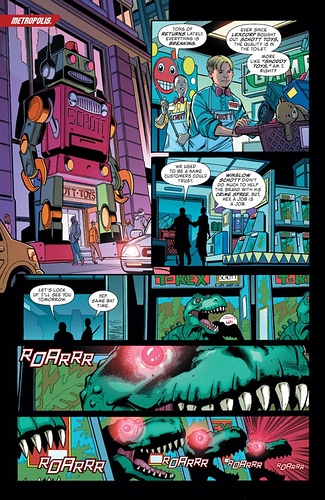 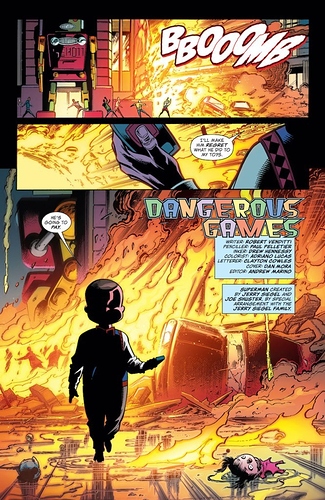 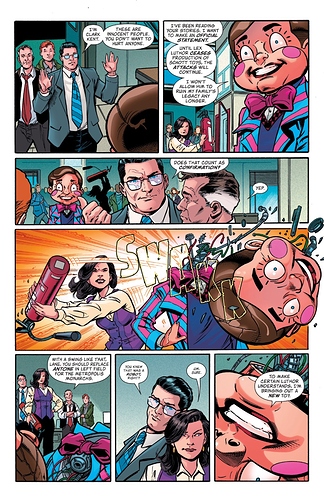 I think that’s a pretty good idea. Certainly adds a bit of pathos to Toyman!

…I don’t get the reference. Who is Box Ghost…?

The one that popped up in the Google results, it’s a character from Danny phantom(never actually watched that show)

Toyman has also almost killed Superman in the comics. In the TPB collection Superman: Critical Condition he hires an assassin to poison Superman with a kryptonite nanotech and then with The Atom’s help he shrinks and is injected in Superman’s blood as everyone thought he was Steel. The only reason I bring this up is that I agree. Toyman can be an actual threat to Superman, even if he is scoffed at by Jimmy Olsen and Superman.

Yeah, see, Danny Phantom is a coming of age superhero story themed to ghosts. He fights all sorts of enemy spirits there’s a tech one, a rock star one, a big plant one, the king of ghosts, a weather manipulator, and basically an infinity gauntlet on one occasion. Like Superman, Danny walks between two worlds, in his case the ghost and human. That’s tough when your parents are ghostbusters.
Under all this madness, theres one guy in his rogues gallery. And he’s the Box Ghost and he posed no threat at all. As his name suggests, he has control over all packaging. Lame gimmick, sort of like toys but that’s what makes him so great. He’s more of a recurring joke than an actual villain. However, there are those extremely rare times when he becomes the super villain he is. He stole pandora’s box and no one was laughing then.
This an example of the kind of character Toyman translates to me. The eye rolling comedic relief but under a blue moon a real big bad.

He’s more of a recurring joke than an actual villain. However, there are those extremely rare times when he becomes the super villain he is. He stole pandora’s box and no one was laughing then.
This an example of the kind of character Toyman translates to me. The eye rolling comedic relief but under a blue moon a real big bad.

I could see that- that is basically the position he’s maintained for the last more than a few years. But thats my point- he could be so much more. 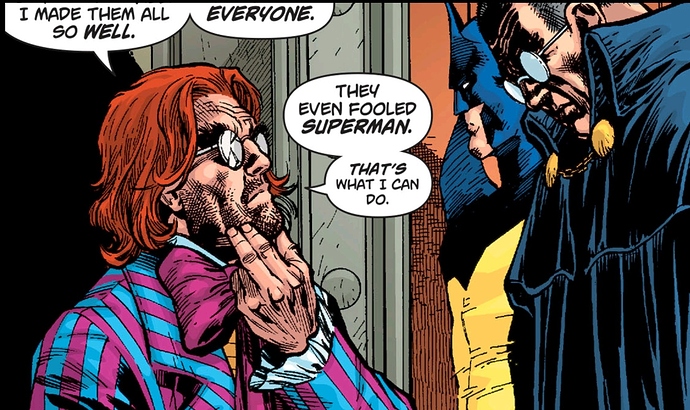 -how dangerous is a man who can make a robot so lifelike that it fools Superman’s super senses? Any goverment agency/army would just be one assassination away from being his, once he replaced them with the new puppet under his control.

Toyman has also almost killed Superman in the comics. In the TPB collection Superman: Critical Condition

Went and re-read some of those issues- that was actually the Prankster you’re thinking of. 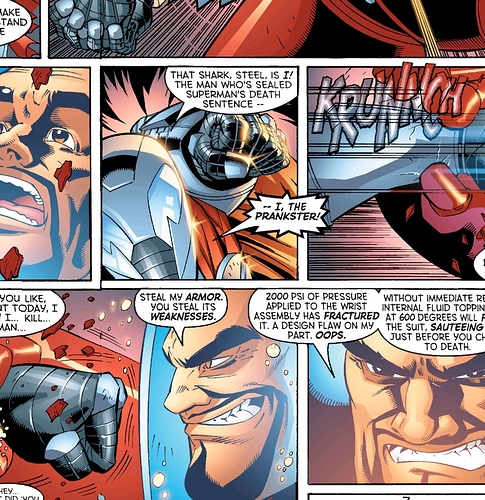 I am sooo sorry!!! I have been binge reading so many random books lately. I cannot believe I made that mistake. I do feel like Toyman was in one of the books I have read recently. This is gonna bother me now.
Here is my pile of books that I am reading from right now. I did finish For Tomorrow this afternoon. I know that this isn’t an excuse for my error though…may I blame too much fun in my twenties on that? 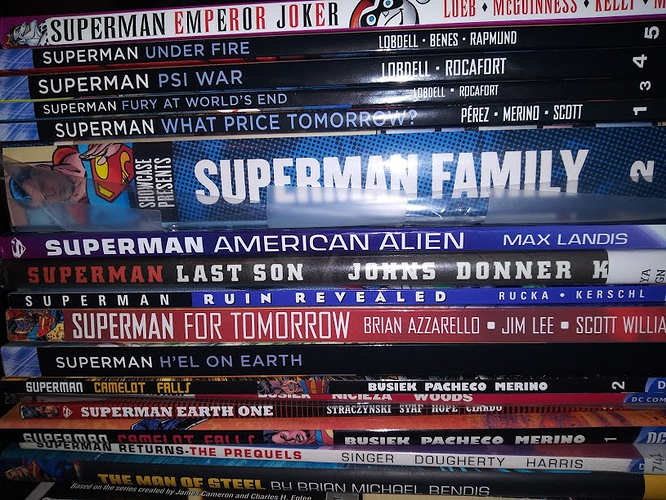 Was this your first time reading For Tomorrow? If so- what did you think?

I read it years ago but have pretty much forgot everything about it. I will be honest, the first half was extremely depressing and I was not expecting that in a Superman comic. That did take me off guard but I did enjoy it. The last half I was all in and when Zod was revealed to be behind it I believe I might have said an expletive in shock.

That cliffhanger, the end if issue #212, is one of my all time favorites. And it’s just a few sentences. “No my War Horse. He belongs to the one who is mine. The one who will kneel before me…”

‘The Toymaster’ makes an appearance at the end of Death Metal #2. Or his toys do anyway. The cliffhanger to the issue is the heroes leaving on a rocket that he built. A Composite Superman/Batman/Wonder Woman 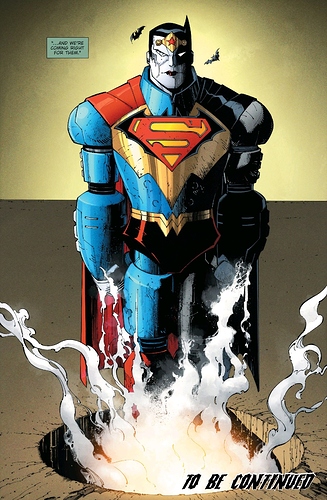 I am reading Action Comics 685 and there is a scene where Toyman earns some points in my book. Superman has died and he “…takes no joy in his passing.” This is more than many of his enemies ranging from Lex Luthor II to Parasite.