Name a character you hate

I have a couple of characters that i can’t stand, either because of they’re personality, powers, origin story, etc. Name a couple that drive you nuts!

My top 5
Mordru
Desaaad
King shark
The guardians
Captain atom (i know I’ll get heat for that one, but I’ve never like the guy.)

He’s always the hero in every crossover. If it is a Justice League story then you can bet that the bad guy can take Superman, Wonder Woman, and Green Lantern, but Batman will outsmart him/her for the win.

At this point it is almost silly.

It is practically a meme, Batman wins if he has time to plan.

It drives me nuts.

Just once I want to see Batman showed up.

While hate is a strong word, the first character that comes to mind is from the other company, Sentinel. A Superman rip-off that’s so dum and boring you have to give it all this dumb excess baggage that just makes it dumber and more boring. Okay, maybe hate wasn’t too strong a word.

1: Damian Wayne: The best at everything forever who gets everything he wants even though he’s a violent, self-important, entitled, snotty little jerk and pretty much gets a pass because he’s a kid and people think his behavior is cute.

2: Anarky: Walking excuse for writers to spout off about political issues they don’t understand. Awful.

3: Changeling/Beast Boy: OK, he was alright in the animated show, but I’ve read The New Teen Titans up through '89. That’s an entire decade’s worth of Gar sexually harassing every woman in sight. Like, I get it, it’s supposed to be a joke, but it really stops being funny about two issues in. He should seriously be in jail for his behavior. He’s not even all that entertaining otherwise.

4: Prometheus. Every problem everyone has ever had with Batman, but without any redeeming qualities whatsoever. He has appeared in only one good story (namely, his Birds of Prey appearance), and that’s only because the B plot was more interesting, and even that was retconned not to be him.

5: Gonna drop a little more heresy here: Leslie Thompkins. She exists to pound the same drum of violence being bad over and over again, in a franchise about a guy who goes out of his way to protect people from violence. And that would be fine, if anybody, ever, at any point, questioned her point of view. But no. She’s always right, and any argument between her and Batman ends with Bruce just kind of looking sad because of how completely she just destroyed him with her ridiculous recycled hardline talking points. The one time she did something even remotely morally ambiguous (letting Stephanie Brown die), it was completely out of character and got retconned away a couple years later. I want her taken down a couple pegs, but I want it to be on her terms, not by making her break her own rules. Can just one argument end with Thompkins being the one with no response? Please? That’s all I ask. I mean, it’s not like I can’t see her point. I disagree with her, but I appreciate anyone with strong principles. But those principles become really annoying if writers never try to challenge or question them.

Doctor Light. I can’t look at him without thinking about Identity Crisis. Rucka had the right idea to kill him off in Final Crisis. He never should have come back.

As much as i love Batman, Henry Walsh is right. There is no thrill to Batman anymore, i never EVER experience suspense anymore, as i know the popularity contest will put him on top.

I Don’t really hate characters, i reserve that for the writers who made them lame

On that note…Once great storytellers…Frank Miller and Alan Moore are toxic, senile, pompous old men, that believed thier own press from 20 years ago, and fell into a deep pit of undeserved narcissim.

I wouldn’t say hate as much as loathe.

I loathe Nightwing. Every time I see him all I hear in my brain is “Overrated!! Overrated!!”

Hate is to strong a word to be honest but I really can’t stand Deathstroke.

Also while Batman is perfectly fine I really loath the Batgod who is prepared for ALL possible contingencies that he has been written as in the last several decades. That really annoys me and I really think its because of this Batgod nonsense that people just are unable to accept Batman making any kind of mistake these days.

THE! BATMAN! WHO! LAUGHS!

Never in the history of ever has there been a character that so perfectly summed up everything wrong with the comic book industry during a given moment in time. Overly grim. Over the top in the worst way possible. Derivative. Hyper violent as a replacement for any meaningful characterization. Just “Shake my Head” bad on every level. Every day I pray for the hastening of the time when this terrible concept is consigned to the trash bin of history alongside other “of-the-moment” poorly conceived characters like Pariah and Waverider.

BatmAn who laughs is stupid and creepy. And how the heck can he even see with a giant dog collar over his eyes?

BWL is also another one I can’t stand.

[cracks knuckles]
Red Hood, at least since the New52. I didn’t really care much about Todd before he came back. He was just this ghost, a cautionary tale for characters I actually cared about (Tim, Cass), but when he did come back, stupid “Superboy punches reality” excuse notwithstanding, I didn’t mind him. His antagonism made sense. Then the reboot happens, he’s still a murder but claims he’s a “hero”, and Batman gives him a pass for the longest time, it seems. It’s like DC wanted to make him the Punisher, but with Spider-Man’s youthful and witty one-liners, yet they failed to make him charming or appealing. His biggest draw seems to be “he shoot guns, make bad guys dead while wearing Bat-symbol as middle finger to his boss”. Woop-dee-expletive-doo!

Harper Row: Y’know what BatJamags said about about Damien Wayne? Yeah, Harp’s infinitely worse. At least Damien had a reason to be snobby, and was frequently told off by other people; Tim, Grayson, Bruce and others weren’t just taking his crap and calling it ice cream. Row, on the other hand? She doesn’t have nearly the training, experience, or sense of the least of Batman’s allies, but she’s better than all of them at everything, whenever terrible writing demanded it. I’ve covered this ad nauseum on my show, because it was this blind lust for the character that sabotaged others throughout the Eternal stories. Other characters are made incompetent, lesser than their previous selves so she can appear important, necessary, or good, but a closer look shows she is none of those things. At any given moment, she’s an expert at something she never tried before (like knife-throwing), and has no arc, development or growth. She’s ignorant, egocentric, flippant to the point of verbally abusive and derisive of better characters–and they just loved her for it [because bad writing demanded it]. No one hated her, they either loved her or sorta didn’t like her, but had a strong respect for her ability to be completely unoriginal. Despite what Tynion and others at DC seem to think, showing her less often didn’t fix the outright stupid decisions and errors done in her name. They made her a freakin’ bat-messiah and the decided to pretend they did nothing wrong, like that fixed anything. She is the only DC character that would actually benefit from a clean-slate reinvention.

The Orphans, the unfathomably stupid and cheap imitations of Cains David and Cassandra, borne from an amateur’s first draft Harper Row fan fiction. He was “the best assassin ever”, but couldn’t kill a bratty child from the poor side of Gotham. He hated his daughter’s guts, but a cheap twist is supposed to make up for all that. She became an infantalized duplicate that’s alleged to be “the same”, but has none of the heart, growth, development, strength or struggles. Her biggest goal was to be Harper Row’s bootlick. She was a side note in a story that was supposed to reintroduce her to the [awful, awful, stupid, awful] new DC canon. Both were little more than bad attempts to copy their good versions, with just enough similarities to pretend they were the same (too bad those similarities were often played more like Easter Eggs in a video game or movie than actual traits or elements). Apparently Tynion thought cheap emotional manipulation and B-grade poetry could mask all his shortcomings. Letting a different writer doesn’t make things better when the new writer is just working of the terrible foundation of a previous one I can’t just ignore that they replaced a perfect good history with total garbage just because it’ll make things easier on people who don’t want to put in the damn effort to actually fix their easily avoidable mistakes.

Nonsense like this is why I’m growing increasingly convinced writing is just getting worse. 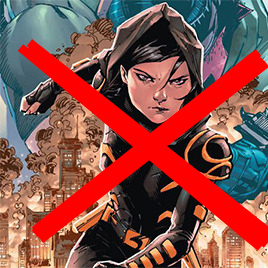 So glad to see other can’t stand the Batman who laughs. you’ve all expressed it well so I’ll leave it at that for him.

Lois Lane! I just can’t stand most iterations of her. Its really because I cant stand reporters, I hate nosy ppl. They are on this superiority trip and think that there are so moral superior in there pursuit of the truth but it really just comes off like there after an ego booster and to prove how much better they are. I love it when someone threatens to expose them for their own secrets, so satisfying to watch that unfold.
Superman should be with Lana or WW. Lois is always so mean to him until she finds out that he’s superman.

Harley Quinn, sorry but she is just annoying to me. I loved her as a kid in BTAS but as a stand alone character I’m not a fan and they can’t get her right it seems. she’s had quite a few relaunches in not a very long time.

Post-Crisis Kara Zor-El. Maybe it was the creepy cheesecake artwork by Michael Turner in the Superman/Batman arc that reintroduced her to the DCU, maybe it was the fact that her return exiled Linda Danvers to obscurity, maybe it’s just how she’s been written in series after series over the last 15 years, but I’ve never been able to stand the modern comics take on Supergirl. If she were written more like the television version I think I’d be fine with her.

I am also not a fan of the Batman who Laughs sticking around.

Also what is UP with “Dead dads who come back and are evil now?”

Start a new title called “the lame and the old” starring evil Jor-el and Thomas Wayne.

Although i would love to see Damian just snap (more than normal) unable to deal with psycho grand-pops…part two, and just go all spider monkey, on red emblem flashpoint Batman. I want to see Damian beat Thomas within an inch of his life. Kid’s fists covered in blood screaming “say you are protecting your family ONE MORE TIME!”

Yea yea i know “hate is a strong word” blah blah blah, but i love to hate and hate to love kiddos.

@BatJamags i hate anarky too, and i never even realized that about Leslie, now that i think of it you’re so right ha. Thats so weird, I’ll never see her the same now.

Now, I can’t stand any of the Metal Batmen except for Bryce Wayne, the Drowned, and that’s only because her personality doesn’t come off as 100% evil for the sake of being evil and her story has some redeeming elements to it.