Of All of Batman’s Sidekicks, Who Was the Most Lethal?

The Big Bad Bat has ridden into battle with some pretty tough characters at his side. Some were tough as coffin nails and some weren’t even close. I am not counting Batman himself in this because if he ever did decide to play for keeps the criminal population in Gotham would drop to near zero within a month. Instead I will name those who have fought beside Batman in order of least lethal to Angel of Death level and list why.

cass is the most deadly and possibly the least lethal, Cass would rather die than hurt someone, she always disables lethal implies danger of loss of life Cass will not kill it is the core tenet of character she has and never will, it is part of what makes her such an awesome chacrter

Dick.Grayson killed
many thugs
In his early appearances,
even in Detective 38
his first story 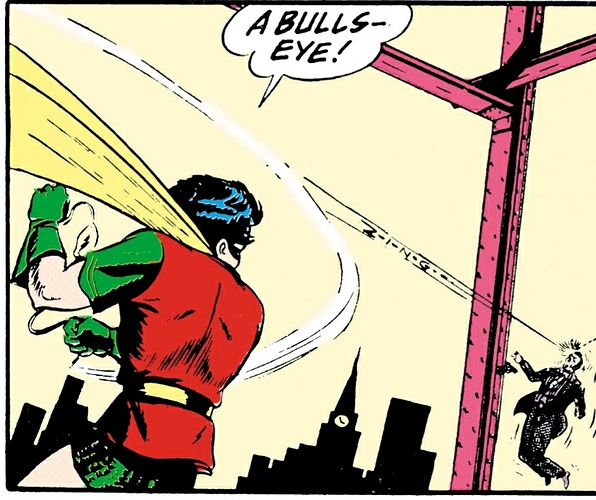 Idk if it’s just me or if you honestly believe Cass and Dick are that low or you messed up the numbers. But assuming the numbers are backwards I’m just gonna say this:
Jason being a killer doesn’t make him more or less lethal than those that wouldn’t. Just more bloodthirsty and trigger happy. Dick and Babs would wipe the floor with his behind if he tried it. He died for a reason, cuz he wasn’t good enough. The guns help him way more than people seem to like to admit. Without them he’d be easy work for quite a few of Batman associates.

You are not giving Jason enough credit imo. He died because he was young, brash, and betrayed by his own mother. After being “resurrected” Jason trained with the League of Assassins then went around the world training with martial art Masters and became one of the very best there is. He also plans things very well and just might have explosives set to mess you up as well outside of his skills and guns.

While all that may be true but you forget that many of the others trained with the very best there is just as well. And like I said before, the guns, explosives, whatever the case only make up for the fact he isn’t on that level. He would get mopped without those tools.

Okay so yeah the numbers are backwards as I initially thought. And like I said, Jason’s willingness to use lethal force only makes him more bloodthirsty and trigger happy. Yeah others would hesitate to kill him BUT they would totally match his force, probably take his toys away, and ground him for a little while. And yeah, okay his mom sold him out BUT you’re trying to tell me that other associates wouldn’t have been able to get out of that and whoop Joker into next week? C’mon I can’t stand Damian but even he could do it. So again, he died because he wasn’t good enough (and everyone wanted him dead

He died for a reason, cuz he wasn’t good enough.

I didn’t say he was weak, I said he wasn’t good enough. There is a difference. It’s not about what he did but rather what he didn’t do and that was dislocate you’re damn thumbs, slip out those handcuffs, whoop Joker’s smiley ass, and leave like any of the other Batman associates would have. I’m not saying he’s was weak. I’m saying he’s not as good as the others I.e. not good enough for the job.

He wasn’t in handcuffs. The Joker pistol-whipped him as his mother held him at gunpoint, and then the Joker and his gang immediately surrounded him and hit him repeatedly before bringing out the crowbar. Even after all that, he still managed to crawl out of the pool of his own blood to untie his mother (who, of course, was betrayed by the Joker shortly after betraying her son). He was too disoriented from head trauma to diffuse the bomb the Joker had set, so he instead jumped in front of his mother and took the full force of the explosion.

Well, that’s not the version I saw but okay. Either way you mean to tell me other associates wouldn’t and hasn’t disarmed someone or at least gotten out of the way while being held at gunpoint or beat up a gang of Joker thugs including the Joker himself? Like this is basic for them c’mon now

Well, that’s not the version I saw but okay.

He’s referring to the original story.

He died for a reason