Poll: #ReleaseTheSnyderCut - Yes or No?

Did you like Watchmen? That is one of my all time favorite movies.

I…can appreciate that Snyder attempted the impossible task of adapting that book, and I don’t think that it necessarily would have turned out any better if anyone else had attempted it.

The DC toxic fanbase has been sending him death threats and harassing him nonstop. Adding insult to injury, his daughter committed suicide a year ago and the fanbase had the biggest nerve to mock his daughter’s suicide.

It’s one thing when it’s just random Internet trolls saying nasty stuff, but it was inexcusable that professionals in entertainment reporting/comic book industry were among the worst offenders. 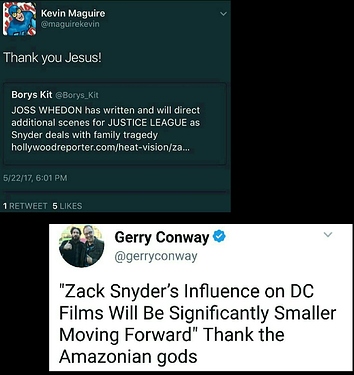 At his core, Zack is a director of spectacle. That can work sometimes, but for superhero movies, it can’t just be spectacle. Seeing Superman and Batman punch each other would’ve been cool in like the 80’s, but now people want superheroes to have character so they feel like real heroes. I love the idea of Batman or Superman going down a dark path and having to kill people for the greater good, but you can’t start off the franchise with that. You establish them as they won’t ever kill then you make the threats more challenging so they are forced to break their rule. Zack Snyder absolutely does boy deserve death threats and hate on his daughter. I don’t like him as a director but he’s not a terrible person. I wish him all my sympathies and I hope he keeps doing what he loves. He just wasn’t the right person for these characters.

I can’t condone death threats against anybody.
Yes, his daughter did commit suicide and that has a certain level of tragedy as well.

However, he had no problem taking millions of dollars to make films

People who think he failed at that have a right to tell him they think his work lousy. (And I am one of them) Frankly when it comes to his work, he is remarkably “thinner skinned”.

He keeps needing to prop his ego up by releasing stills from his “cut” and having people fawn over them. From all the stills I’ve seen, it still looks like it would have been more of his same tripe.

So Mr. Snyder can go pound sand and many people are glad that he and DC have parted ways. The real shame is that it was 2.5 movies to late.

I have some very choice words for him should I ever have the displeasure of meeting him face to face. However, I won’t expound on them here as that would violate community guidelines.

When did Jesus become part of the Amazonian Pantheon?

Didn’t appear in the Old or New Testaments. Is it made mention in one of the books of the apocrypha?

And the post was 2 months after his daughter commuted suicide. Well beyond the historical 40 days custom.

I agree. Also, I’m sick and tired of hearing about this Snyder cut crap!

Odd, i don’t know how this got bumped, but it did.