Out of the original streaming shows only, which show has the best villain?
Pick only one, and decide this character however you like (I.E. the most charismatic, the most dangerous, the most unconventional, etc.)
This villian doesnt have to be the main villain either!

*While not necessary, I’d love to hear why you chose the villain you voted for. 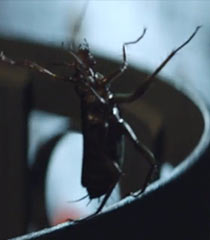 I’ll be that guy.

Am I the only one not seeing a poll?:

First time making a topic on here, didnt know I could make an actual poll so I left the “poll” to the comments section.

(I had a lot of trouble finding that myself…)

Despero gets my vote! Normally he is a joke but on YJ he took out the whole team without trying. And he did it for fun and bragging rights. Maybe not the brightest but his power more than makes up for it. There are plenty of other villains but the shift from joke to serious threat had me rooting for him!

Floronic Man. While Jason Woodrue’s change into Floronic Man was very brief, his appearance was the most terrifying part of the show. But, with the alter ego of Woodrue, his villainous deeds were because he used the wrong means for a good cause. Obviously, the dissection scene was awful, it did allow Swamp Thing to learn more about himself/itself.

Deathstroke is a close second, but, surprisingly, I find him too brutal- especially what he did to Donna. Plus, he should be more focused on contracts (like Arrow’s version).

As for the poll, if you look for the gear icon at the top right above the body message, clicking it shows an option for a poll.

I like Gorilla Grodd. Shame the cgi was so costly but that episode when they went to Gorilla island I thought was great. Didn’t get to see him much but loved when he showed up.

Tobias Whale from the Black Lightning TV show. Maybe he doesn’t have fancy powers like reverse flash, Mr nobody, or godly powers like anti monitor. But his plots and schemes are up there.