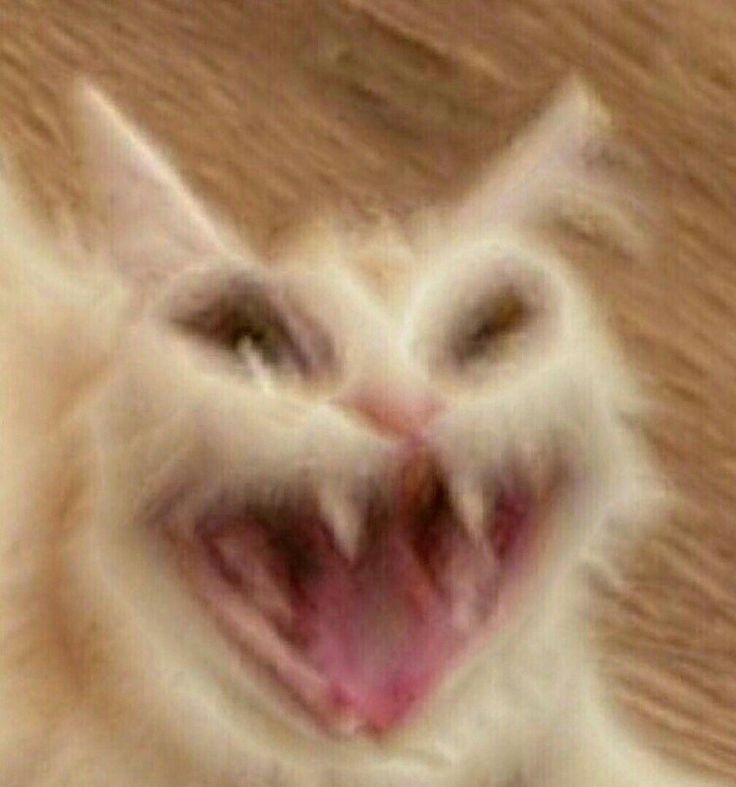 They ain’t messin’ AROUND!

That’s what happens when they get that HBO budget, I guess.

Okay, it took me a second, but that line of fire is actually her hair, at first I thought that it was just apart of the background but no. I just now noticed that… oh man…

I swear if there are complaints about this then I’m gonna be mad, yes we had to wait until season 3 for pure Starfire content but this is the product of character development. I’m so pumped to see the events that lead up to her transformation into this.

An aspect of season 3 that holds particular interest for me (besides my gurrrl making her appearance on the show) is how the Starfire V Blackfire story arc will play out during the season’s run. 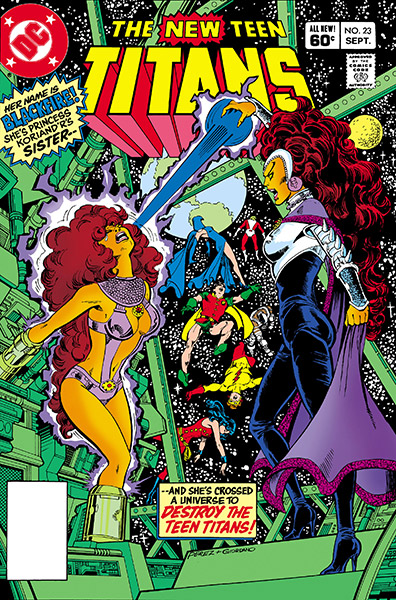 Unlike the somewhat lighter-toned depiction of their rivalry that’s been seen in the Teen Titans and Teen Titans GO series’, Kori and Kommand’r have a particularly brutal history of confrontation in the comics, especially during the Wolfman/Perez era back in the 1980s. Their battles during this timeframe were acknowledged by both Star and Blackfire to be to the death, with both siblings promising to slay the other if given the chance. 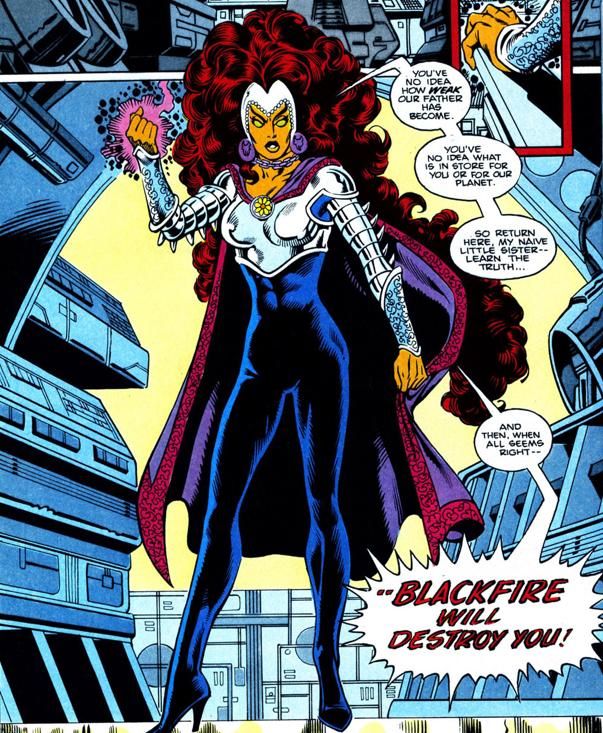 Am also wondering if the rest of Star’s family (Myand’r, Luand’r, Ryand’r) will factor into the story, along with the possibility of whether or not some portions of the storyline will take place on Tamaran.

Welp, anyhoo- based on what I’ve seen so far there’s every indication that this season of Titans is most assuredly must see TV.

BTW- as I did for the Harley Quinn series I’ll be posting episode reviews for Titans season 3 when it premieres as well.

What I’m curious about is how big a scope is the season going to be. Will the story stick to Earth, or is there a chance that they might end up on Tamaran?

Me too. I’m wondering if there is going to be a smaller plot with Grayson and the Titans in Gotham along side the Starfire/Blackfire plot that is going to finish off the season with a BANG! Similarly with the Slade and Cadmis plot from season two. Maybe Babs and Scarecrow and Jason are season starters? AAAHHHHHHHHHH I’m so ready! even though it’s gonna be a longer wait

Same here @TheWifeOfJasonTodd. So ready for season 3 to begin!

That have revealed it.
Look awesome™ 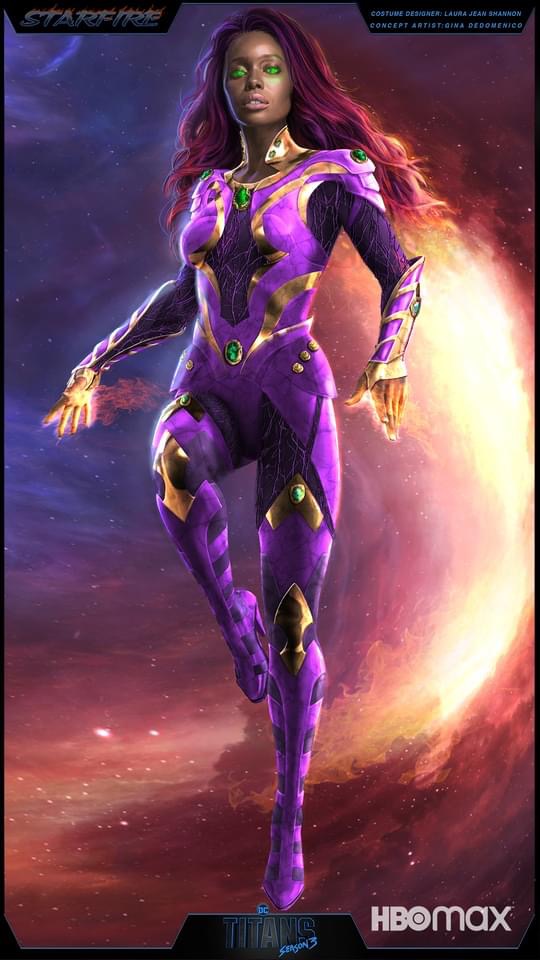 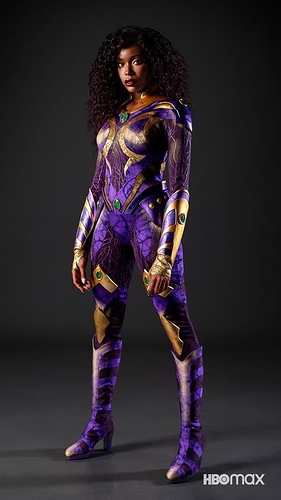 They just tweeted! Our queen is here! 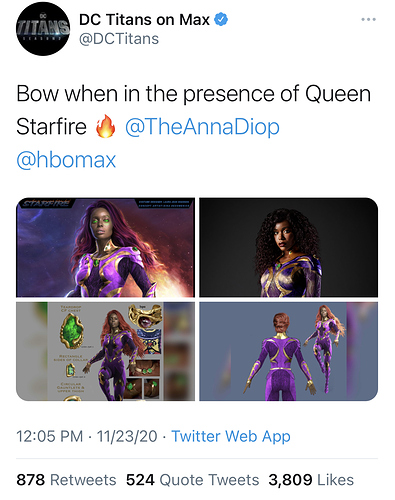 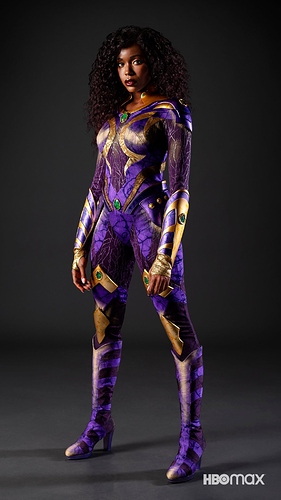 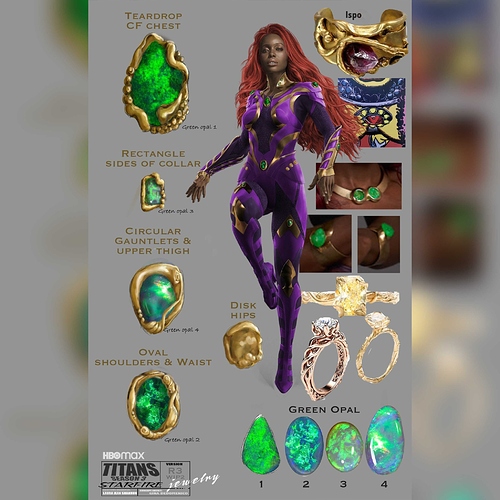 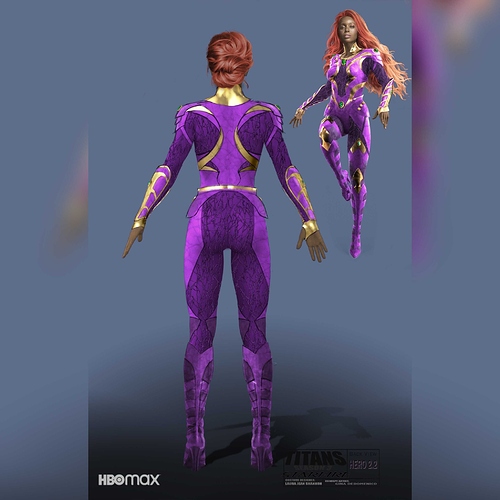 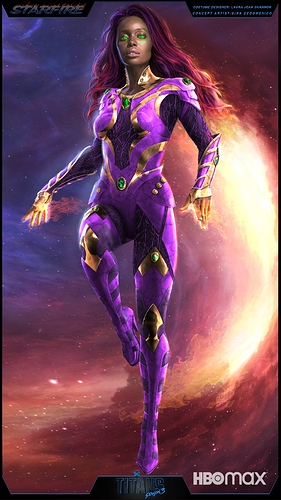 Dang, that looks pretty cool! Was hoping for a little more hair, but still, pretty dope. Looking forward to seeing it in action!

Have you guys seen this??? 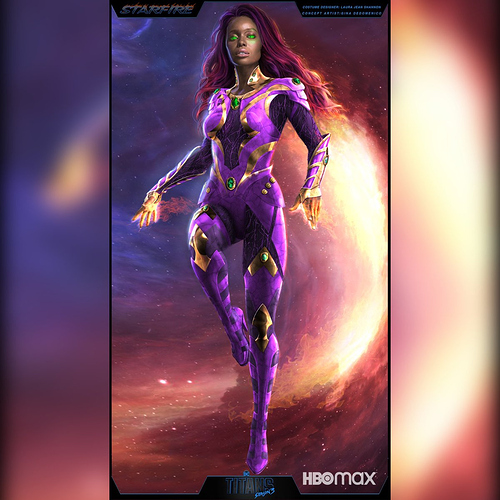 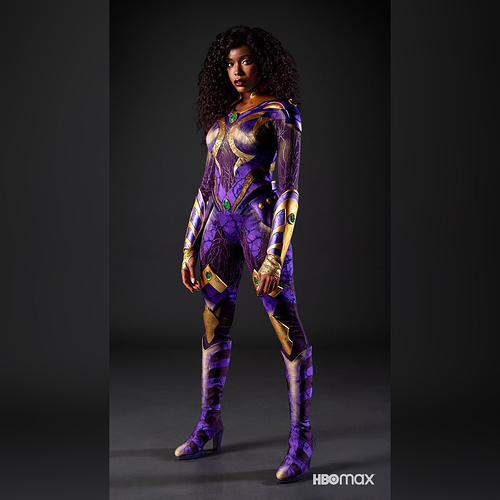 Ok wow can we just admire @TheAnnaDiop as Starfire for a minute!? Seasons 1 & 2 are now streaming on HBO Max. #DCTitans pic.twitter.com/JGLkVRxqUd

Her costume looks AMAZING! Her hair is looking less red in pic 2 which is kinda sad, but I love the curls return. Kory better be front and center in season 3. And we need to spend a lot of time on Tamaran. Anna Diop talked about Tamaran having some West African/Senegalese influence and as a fellow West African and obvious Starfire fan this has me SO EXCITED.

Awkward, didn’t know there was already a post for this, BUT I’M SO EXCITED GUYS!!!

Yeah, I noticed her hair looks a little darker, almost black, but that could just be lighting.

A thing I noticed that I really like is the sort of biological looking lines and patterns around the suit that looks very cool. I’m hoping that when she powers up, those things light up.

Not sure if we’re going to get a lot of Tamaran, because budgets, but I hope they at least have the climax there – and with Blackfire being the villain, I’m certain Starfire will be front and center. I just hope that all the other characters have their chance to shine.

This a very solid design concept and I’m very much digging it.

Can’t wait to see Star in action this coming season!

An aspect of season 3 that holds particular interest for me (besides my gurrrl making her appearance on the show) is how the Starfire V Blackfire story arc will play out during the season’s run.

I have this comic proudly displayed on my Titans shelf!

Love love love the look. I hope they go with her natural hair color when she’s not fired up. Her hair prior never looked great. Better just go real. Can’t wait to see in action.

Yet another great costume to be overshadowed by terrible writing, direction, characterizations, and their willingness to throw in just any bat character to boost ratings.

This looks so cool!! I’m really excited for this storyline.

Yeah… honestly I’ve been pretty disappointed with every season so far, but I know a some people have liked it. It’s just not the Titans characters that I already like outside the show, so that’s hard. I remain optimistic though! They haven’t really developed Kory very much yet, so if they get this Tamaran storyline right, they could absolutely win me over. The other core characters I feel like have been developed to the point where they are who they are now (except perhaps Donna if they bring her back), but with Kory they still can go in any direction.