Read All About It: INTRODUCING THE NEXT BATMAN! 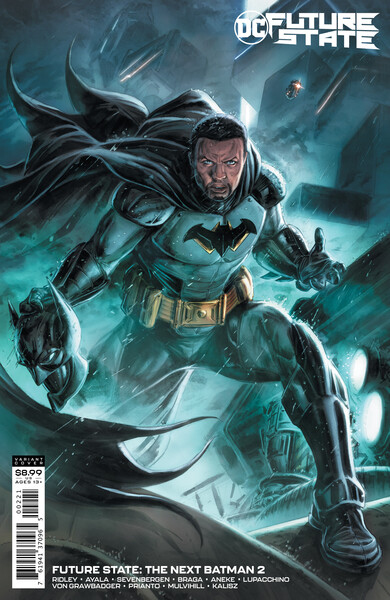 Even before the announcement of DC Future State and Future State: The Next Batman , by John Ridley, Nick Derington and Laura Braga, the news that a person of color could be the next to don the cape and cowl as Gotham City’s protector sent tongues wagging inside and outside the comic book community about who it could possibly be.

Today, the speculation finally ends with the reveal of this surprise variant cover to issue #2 of the four-issue January/February miniseries. Featuring striking art by Doug Braithwaite and Diego Rodriguez, Gotham’s defender in this dystopian future is revealed as Tim (Jace) Fox, estranged son of Lucius Fox and brother to the former Batwing Luke Fox.

Read all the details at DC News now!

Did YOU guess Tim would be the next to don the cowl? What do you think of this announcement?

Let us know what you think in the comments below!

This should be interesting, @moderators, even if I won’t be able to get the comic book, will DC Future State be on DC Universe Infinite 6 month after its released? Thankyou.

I’m a sucker for a legacy character

Hey @Scroogefan78! As of right now, our understanding is that yes, they will be available on DCUi 6 months after they hit the shelf.

I figured it would be Luke, but that’s cool too. Should be interesting to see why Tim dons the cowl.

How much of the Future State stuff will stick?

I’ve never heard of this character

I knew about Luke I didn’t realize he had a brother. This’ll be interesting. I’m still very excited for it.

Did YOU guess Tim would be the next to don the cowl?

No. I thought it would be Luke Fox. In detective comics he hung around Azrael quit a bit and I thought it was foreshadowing that he would become Batman like Jean-Paul once did. Guess I was wrong.

He’s actually a fairly old character, the first offspring of Lucius shown in the comics all the way in Batman #313 in 1979. In that story, Tim was lead to believe by a corrupt businessman that Bruce was a slumlord, which caused a falling out with his father and had him join the Terrible Trio to fight against this “injustice.” He wasn’t used much after that (last known appearance according to DC Wikia was the DC Retrospective: Batman - The 70s one-shot.

John Ridley brought him back recently in the Batman: The Joker War – War Zones one-shot, though possibly with a different history. As I recall, it talked about Tim having come back from serving the military.

Honestly, when everyone said it was going to be Luke Fox, I was inclined to believe it, mostly because I didn’t care either way. But as soon as I saw Tim Fox in one of the issues following Joker War, I just knew he would be the one to don the cape and cowl in Future State.

Everyone who knows my thoughts about Bruce knows that I am definitely excited for this haha! Tim looks sick here. I’m pumped.

I recently finished reading all the Batman (1st series) comics from about issue 250 to 400 that I didn’t already have or have read in trade and I came across Tim Fox and thought, “Maybe he could be the Future Batman instead of Luke Fox just to throw off all the speculators.” Never in a million years did I think I would be on the right track!

I had to google Tim Fox. Had no idea he was an established character pre-Crisis.

I’ve been trying to figure out why I have no problem with this idea when I had such a problem with the idea of Luke Fox being the next Batman (as rumored). Then it occurred to me: Luke Fox was a character who came out of nowhere during the New 52 period and replaced not only the previous version of Batwing, but also Tim Fox himself. Tim goes all the way back to the late 70s Len Wein run that introduced Lucius Fox in the first place. Ergo, my inner snob could accept an established Bronze Age character (even an obscure one) more easily than it could accept Luke.