In a true confrontation (setting aside like Thanos or Galactus and a few others) if DC sent in Doomsday first then who on Marvels side could actually take him on and survive?

Hulk, Dr. Manhattan wins all of them tho

My apologies for mentioning Thanos. I was in a hurry

I agree with most of those already mentioned, but I’ll just throw the Juggernaut and Magneto on the pile.

I mean, since you didn’t say “win,” just “survive,” Wolverine, Deadpool, and anybody else with a full healing factor is gonna be fine.

Without the IG, Thanos gets steamrolled by Doomsday. He’s not really as powerful as casuals assume he is.

For those putting the Hulk could you elaborate? Personally I don’t see the Hulk lasting any longer than he did vs Thanos in Infinity Wars or even surviving for that long.
It’s Doomsday we talkin about here! Single handedly one of the deadliest foes of the known DC universe. (Again, just my personal opinion)

Unbeatable squirrel girl, I don’t know how, but she beat Galactus so Doomsday is light work.

There is no comparison, I love them both. I especially love the Marvel DC hero and villain mashup, Darkclaw vs Hyena.(Batman Wolverine mashup vs Joker Sabertooth mashup)
https://tse1.mm.bing.net/th?id=OIP.6YdTtinzkUYczXvGW-8U8gHaFP&pid=Api 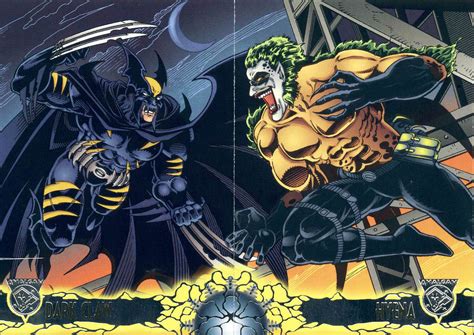 For the Hulk: Doomsday and Superman in a direct slugfest killed each other. That was a contest of strength, resilience, and endurance. The Hulk is theoretically infinitely strong. He’d just have to last long enough to get angry enough to win. Considering that in actual crossovers, he’s been shown to be on a similar power tier to Superman, I think he’d go the distance. Think of it this way: Suppose you’re Doomsday. What’s your game plan to actually stop the Hulk?

Though frankly, I think it’s much easier to see how characters like Doctor Strange or even Professor X could outmaneuver Doomsday, since methods of subduing him that aren’t necessarily lethal will not allow him to come back stronger like he usually does (you can’t come back impervious to what killed you if you weren’t technically killed). If the Marvel heroes decided to send one sort of “champion” to fight Doomsday, Doctor Strange or the Silver Surfer might be the “safest” bets. The Phoenix would be virtually guaranteed to win, assuming the Phoenix Force itself is feeling cooperative. That’s also assuming you don’t count the Phoenix as a villain. If we’re letting villains in on the party, Dormammu and Galactus would probably not even notice Doomsday.

As far as a physical matchup, the Hulk and the Juggernaut (along with a couple more minor characters like the Sentry) are probably Doomsday’s nearest equivalents in the Marvel Universe.

Agree with dr.strange (magic based characters) and deadpool (immortal based characters) and… ant man was a great answer. But when I think about main marvel, Spider-Man or the fantastic four or iron man or hulk… they don’t really stack up for me. I think the x-men could do it, but only because Doomsday is a team up to defeat kind of boss and the x-men is a team up comic. Otherwise… I’m putting my money on … The sentry! Because he’s also the void.

Reed Richards, he has the Ultimate Nullifer, it took out Galactus, Doomsday should be no problem.

Honestly put thanos in and doomsday would still stomp. Until infinity war came in, thanos was definitely one of the lower villains. But since doomsday can’t die, the only people to be able to “contain” him would be (besides Galactus" Dr Strange, or maybe hulk (yes I understand there are other possibilities)

@BatJamags.
I like how you put it.
Think of it like a big arena. You have Marvel and DC characters throughout the stands. In the “ring” if you will on one side you have Doomsday, and on the other ______.
Not saying anyone is wrong, everyones entitled to their own opinion. If i had to pick at least one guy to go in and put up a fight without necessarily dying. I would have to go with Thor or a combo of Dr. Strange and either Deadpool or Wolverine.