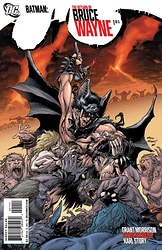 Hello again friends and welcome to the Damian Wayne Book Club here at Renegade Robins. This week we have the Return of one Bruce Wayne AKA Batman. With the OG Batman returning where does that leave the Reborn Dynamic Duo? Let’s find out shall we?

New to DCU for June 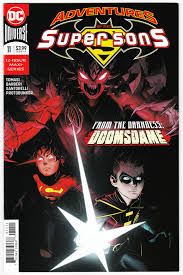 Superboy and Robin have been chased through the galaxy by Rex Luthor and his band of murdering minors…and at last the final battle has begun! Using the Dimensional Cube and a brand-new, shiny army of prison planet escapees, Rex has opened the portal to Earth to start his invasion! But Jon and Damian have an army of their own, and when you’re backed by a cybernetic cowboy, an intergalactic ride-share program and several hundred “planeteers,” how could you not put up an epic fight?! 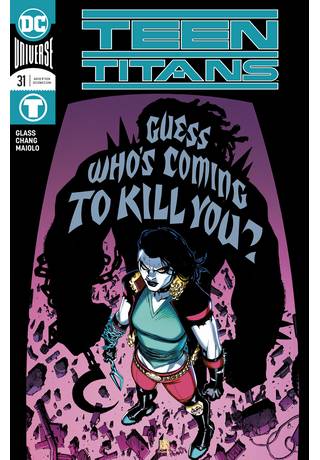 Lobo brought Crush into this world…and now he’s gonna take her out! But the timing couldn’t be worse for the Teen Titans, with Damian’s secret prison exposed to the rest of the team, not to mention Deathstroke’s death looming over them—can the team put their drama aside to help Crush battle her deadbeat dad? Or will Lobo be the final nail in the coffin for the newest Teen Titans?

Be sure to check these two issues out for some more Robin action!

As with last week we will be having an open discussion so no questions will be posted. Damian is going through a momentous time in his life here an I’d really like to hear your thoughts on these issues and on the ones we’ve read in the last few sessions.

And that’s all for this week folks. Hope you all stay safe and healthy.

[Next week on RR:RH] The Red Hood vs Batman.

[In two weeks on RR:DW] Red Robin and a List.

Read the first 3. I’ve read them before but it’s been awhile. I will say it’s nice going back and reading these after Metal (oh that ending

) The first issue is my favorite and kinda would like to get more stories from this time setting. I know Snyder likes to tie things in with Morrison’s stuff and must say Morrison’s Black Beard story is much funner than that one we got from Snyder’s All Star Batman. That seemed so out of left field. I know it wasn’t actually BB but that was just a weird one.

I liked the Blackbeard story too but the first one was my favorite. I wish someone would do a few stories in these time settings just for the fun of it. I’d buy the heck out of something like that.

Man, I forgot all about Vicki Vale’s discovery in The Road Home. Not sure how I forgot since it was a plot thread running through several books at the time.

Even when he’s doing his best Man With No Name, Bruce still has to find an alternative to pistols.

Anyone have a favorite version of Bruce in this series, @RenegadeRobinsClub?

I would definitely wear the Steel armor! 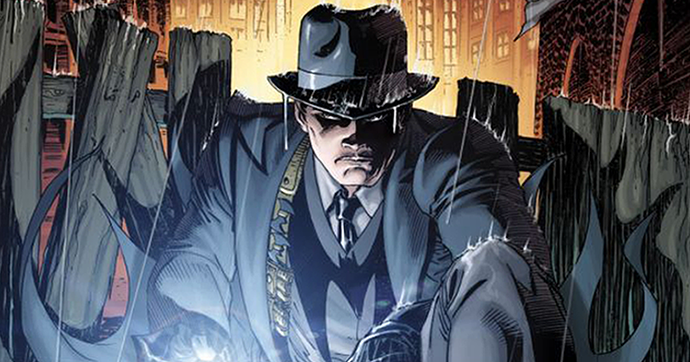 Bruce in a fedora is a pretty classic look for a detective.

Just finished these earlier today. I said it in OP but it was fun going back over these now that I’ve read Metal and JL totality. My favorites for this mini are issues 1 & 5. I felt like he really nailed the old noir style with the dialog. Every line from Martha’s friend read just like something from an old movie like when she is trying to get the lighter to work. issue 6 is ok but some of the dialog was hard to fallow i guess. That may have been the point but still wasn’t crazy about it. Overall a fun read and would like to see more from the worlds of issue 1 & 5. I remember in a eps of B&tB where Bruce meets his parents at a dinner party and he or his day is dressed in that old bat outfit from #5. Is there a comic with that whole scenario in it though?

Even when he’s doing his best Man With No Name, Bruce still has to find an alternative to pistols.

Well he is still Bruce after all.

I felt like he really nailed the old noir style with the dialog. Every line from Martha’s friend read just like something from an old movie like when she is trying to get the lighter to work

That’s something I really liked about that issue as well. It felt very much like old noir style writing and I would love to see more stories in that period.

And I do feel the dialog in issue 6 was done that way intentionally. Still it was hard to follow at times and it has always been my least favorite issue of this.

This was a great, crazy kind of story. It really highlights just how malleable and remixable the Batman character and story can be. He works in Gotham in the traditional way, he works in a noir environment, he even works as a cowboy or a pirate or even a freaking caveman. It also does the heavy lifting of explaining the final consequences of Final Crisis and all the stuff that’s been happening in the background of Morrison’s run so far. I think it mostly works, but I can understand why some people get confused by it.

I agree that Batman really is a character that is malleable and remixable and that can work in so many timeframes. I remember reading this story and then wanting to see him featured in a story set in medieval times. I still want to see that so make it so DC!

I feel like there has to have been at least a few elseworlds like that. I mean, with a name like “Dark Knight,” it’s almost a crime if they haven’t!

I can’t think of any off the top of my head anyway. Seems a shame if there isn’t something of the sort out there somewhere though. Seems like an obvious choice to me.

I just looked it up and if there is one, it isn’t on DCU. The closest Batman one I’m seeing is “Castle of the Bat,” which is more a take on the Fraknenstein mythos, but we get a sort of knight story with Superman called “Superman: Kal.” I may have to give that a read – I mean, Dave Gibbons and Jose Luis Garcia Lopez is a hell of a creative team.

I may have to give it a read as well.