I can start making T-Shirts

Made it myself. Except for the alligator in the globe 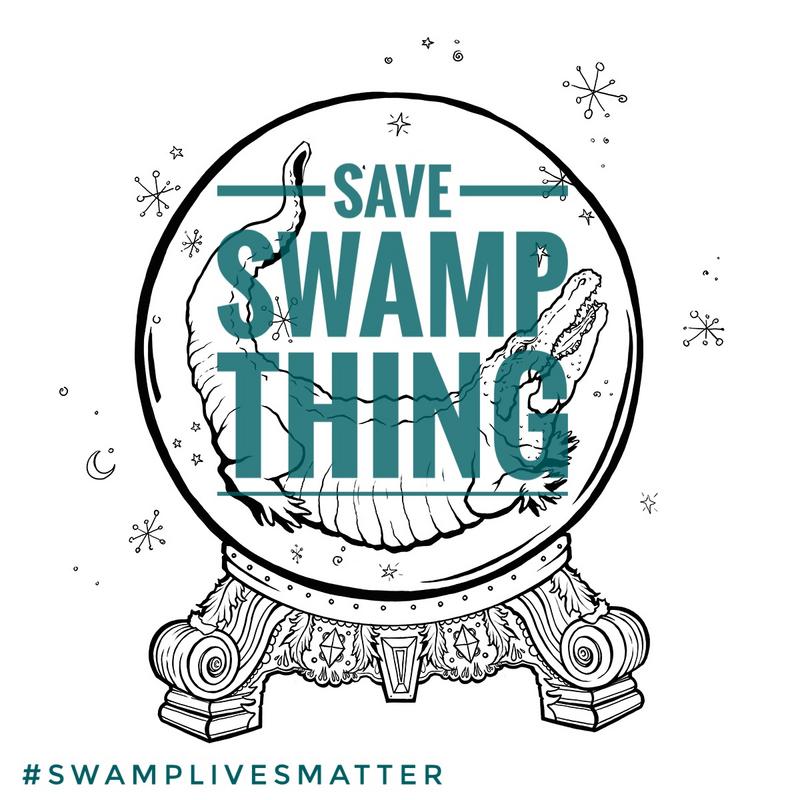 Hey @dmmartin27, thank you for the enthusiasm!

Just stopping in to give a quick reminder that posting petitions on the site would be a violation of Rule 9 of the Forum Guidelines: http://yourdcu.com/cmg

Ive always loved swamp thing an so far its the best show this app has .to get rid of it would be foolish. They need to seriously do whatever they can to save it they can always find a new location to film but even if they kept that one it would be worth every penny . let me know if there is anything i can do to help keep it going. Angeloutlaw420@gmail.com

An id buy a tshirt

Save Swamp Thing! Canceling the show so early on is in direct conflict with what this fan service was supposed to be about.

I hope that the powers that be are noticing the support this show is getting. It deserves to be saved.

I’ll say this…Announcing that they were canceling this, will probably be one of the worst idea’s and decisions they’ve made. That being said, 4 episodes in…and I’m not a fan. The first episode was amazing, but it’s be continously trending downward for me… The characters are all diminishing in my in caring about them and the relationships are paper thin at best…

The dcu Swamp Thing series is the first version I have liked since reading the character in Constantine. Super disappointed it was cancelled so quickly.

I have been a fan of Swamp Thing for over thirty years and I was very excited that a series was finally being created that might bring such an intriguing character and title to the attention of the maistream. I was disappointed to learn that before any episodes were even available for viewing that not only was the series cancelled outright, but also that the number of episodes created was being reduced right away. After viewing the show I immediately enjoyed it because of the writing, characters, and the 5 star acting. I’m so disappointed this suspenseful and brilliant series is being brought to an end so soon and would gladly petition the powers that be to give this gem a fair chance.

I am totally pissed at DC for cancelling such a great series!!.. They have lost there dam minds!!..If it’s a funding issue I’m sure that if they nock on a few doors they can achieve it!!.. Come on DC!!

If swamp thing is cancelled jus5 to be replaced with star girl I’m deleting my membership DC needs to get with th3 program stop try to be like marvel . People like dark3r shows now an star girl ruins the dynamic of the app if you were to replace it do so with a much better character like etrogan the demon or someone that mak3s sense stargirl liv3 action just makes DC a sellout trying to be a wannabe marvel which sucks to begin with now that there sucking the Disney dick bring back swamp thing

@angeloutlaw420.59557 Stargirl was planned and announced the same time as Swamp Thing. I’m not sure where you got your information from, but you were misled by that source.

@angeloutlaw420.59557 Stargirl was planned and announced the same time as Swamp Thing. I’m not sure where you got your information from, but you were misled by that source.

Some DC lifers like some variety in their content. Not everything has to be TV-MA. Comics are supposed to be escapism. They are morality tales. That’s why they are modern mythology. Sure, dark and gritty has its place at the table, but that table seats diversity as well. Not just in characters but in tone. Besides, if Stargirl eats up its budget so that fewer episodes are all it can afford to do & doesn’t get picked up for distribution outside of DCU, it will suffer the same fate as Swamp Thing, and deservedly so. If it finds a monetizable audience as Doom Patrol, Titans, & Young Justice have, it will get a second season, which will be deserved and earned.

Don’t blame Stargirl for Swamp Thing’s failures. Swamp Thing did itself in on its own merits. A show can be good, but if it doesn’t find an audience that comes close to covering its costs, it’ll be gone after a single season, which is exactly what happens to the vast majority of shows on TV or Streaming services.