My biggest problem is making the time for it and starting. In order to get it started, I just started writing the prologue and part of the first chapter. And let me tell you, it looks bad.

I want things to be perfect the first time. Realistically that’s not gonna happen when writing, and I had to accept that and write an ugly beginning. I made an outline before writing so I have an idea of where I want the story to go. It’s a YA about a teen superhero trying to make their way into the world. I don’t wanna say too much because DC’s rule of being able to claim ownership of anything written in the forums.

I think it’s cool you write screenplays! I actually started writing stories in that format before getting confident enough to write details.

Here’s my character. I made her like my alter ego lol. 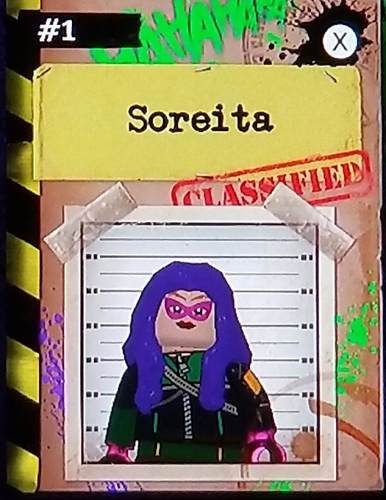 I was playing Nier: Automata but been neglecting it since Animal Crossing came out… I think I’m 2 episodes away from finishing Superman: TAS. The episode where Darkseid brainwashes Supes.

That’s alright! I had to disappear for a bit because I unexpectedly had to go take care of a family member. The apps never been laggy on my phone before, so idk why it’s doing it now. I was even in that 3000+ post mafia game and it never lagged. I bought a tablet specifically for this app tbh. Didn’t like reading the comics on my phone; too small.

Interesting idea, I happen to work for DC, so your idea is MINE! Muahahaha!

No seriously, I will never have the patience for that, and I’ll make sure to look for it in the bestsellers!

Maybe once I’m further along, I’ll be more open to share it hahahahah. My friend had to convince me that it was interesting enough to write about. So now I’m like “must protect baby!”

You changed your picture! Almost didnt recognize you

I broke quarantine on my 42nd day. I didn’t even get to leave the car.

Also, it was to go get tested for Covid-19. That was a while back. Would have hit my 8th week today.

Would love to hear mor about what you guys are up to in quarantine.

I like your LEGO character. My favorite color is purple.

I’m way behind on the animated series universe. I’m still on season one of Batman TAS. I used to watch religiously as a kid. I need to tap into my inner child. Haha.

The trick to writing is in revision. Nothing will be just right the first run through. It will take a few revisits to find that perfect flow and drama.i revise my scripts multiple times before saying it’s done. Then, a month later, I read them again and realize it needs more work. If you’re not on a deadline, make use of revisions. They will save your story and they make the earlier drafts much easier to approach. You can kind of experiment with earlier drafts when you know you’ll be coming back to it.

I started once a superhero story. It was meant to be a series but I only wrote one episode. I just wanted to try it. Eventually I’ll get back to it. I find the superhero writing to be fun. You can do all kinds of crazy stuff.

Awesome that you got a tablet for this app. Sometimes the text on a comic can be a bit too small on phones. I have an Xperia 10 plus with the bigger screen and still have to bring the screen close to read some panels.

What state are you in? I don’t think any areas near me offer testing.

I’ve had to go to work 3 days a week since March. Other than that, I’ve been home. Only a handful of times I’ve gone to pick up groceries. Though yesterday my girls had to go the vet for their annuals. I wore a mask, but surprisingly no one else in the office did except one technician. I did have to break the rule of staying away from the elderly because my grandmother needed assistance a few weeks ago.

I’ve been living in animal crossing the past month and a half. Would love to play a game either on ps4 or switch with people who want to casually hangout and have fun. I dont have a proper gaming pc… but id be down for some table top simulator or d&d type of game. My laptop should be able to handle that much lol. I have ff14 and WoW but I stress about being a tank (even though I always accidentally pick tank classes lol). I always think my laptop is gonna die when I boot them up!

I keep making the girl at work mad over stupid stuff today. It’s hilarious. My communication professors would be severely disappointed hahahahah.

And it turns out my phone app hates this thread in particular. So it takes ages to type a response

Thanks, so is mine! It probably took me 2 hours to customize my girl tbh.

I’ll probably finish season 2 of Justice League tonight. I have 4 episodes left. I usually watch them while working on other things.

I normally consider myself a patient person. For whatever reason, I’m not patient when it comes with my creative works. I just wanna blaze through them so I can move on to the next one. xD I have a hard time coming up with superhero names tbh… Well. Names in general.

Yeah, that’s why I bought a tablet. I want to be able to see the page in full. I got a Samsung Tablet A 10.1". My phone is a samsung note s8. Money well spent imo.

Wow. I’ve never played animal crossing, but I hear it’s pretty good. I have a switch and I’m thinking about getting it.

I’ve been living on Hulu lately. I just started One Piece, and that should give me something to watch for a while.

Broke quarantine again by going to an outdoor thing with friends. We social distanced the best we could, but I wouldn’t exactly call it safe.

I’m not in the best spirits right now, because I’m tired.

I’m sorry to hear that.

I have maybe roughly 260 hours into the game. I’ve been a fan of the series since 2003, so I’m probably biased. If you do get the game, you’re more than welcome to come visit my island. Been debating about picking up monster hunter or diablo 3 on the switch. But I’d like to play with others with those games tbh. I was gonna offer to buy a copy for my friend too if she promised to play. My therapist told me that sounds sad.

(She doesn’t mean anything bad by it; it’s part of our banter)

It’s been a long while since I watched One Piece! I fell out of it because it had a hiatus and never jumped back in when it started back up. I haven’t decided which anime to pick up atm. Waiting for the next Promised Neverland volume and the final School Live volume.

All my friends live out of state, so I’m used to social distancing. If you’re able to, being outside either just sitting outdoors to read or game or walk around could help your mood. I try to make time to take my girls outside when the weather is nice. Chamomile and stretching could also help your mood.