Unless the ISA lies to him and says it was Stargirl.

Remember in last comic of stars and STRIPE where Mike drives the robot, it will probably happen.

Omg LOVED THIS SETUP FOR NEXT WEEKS FINALE!! THIS SHOW IS SO SATISFYING!!! ONCE AGIAIN KUDOS CAST & CREW!

I am so hyped for the finale!

Here are my thoughts and ramblings of notes I made while watching the episode:

I really feel like this entire season we are suppose to believe that Icicle is the brains of the operation. I really think its Brainwave and he just manipulated Icicle like crazy to do his bidding. I really dont think Icicle wants to do what he is doing.

Mikey is now the superhero DrillMan… or maybe not? Will Mikey show up in episode 13 to save the day? Who knows. You can tell deep down he wants to help. Curious if Mikey will show up as back up though because I doubt Courtney left behind all of the unused JSA items like the lantern and the pen.

Kinda sad they killed the Fiddler, or maybe they didnt and it was a fake out? I guess a villian based off music is not that flashy on tv, but it almost felt like she served no purpose through the entire season. This by itself is disappointing. Only thing I can think of is they included her to set up season 2?

Poor Cindy. I wonder if she breaks out, she will be bitter enough to help the JSA defeat the ISA. She seems like the type of girl that would do something like that.

This is the point I pause my observations to say WHY DID YOU HAVE TO KILL HENRY!!!

I guess they are saving Soloman Grundy until episode 13. Hopefully they get a slightly bigger CGI budget for season 2 to do more.

Justin Brings KFC and then later we get to see the Colonel Sanders wannabe. Fitting.

So I guess Beth’s job as Dr. Midnite is tech support. Should have just called her Orcale and be done with it. I guess though all these CW shows insist on having a Felicity type character since Arrow, so this wont be any different. Just wait episode 13, Beth will magically get super hacking powers and somehow beat the Gambler that way. I just wish they would have done more with Beth than make her JSA Geek Squad.

So all the adults are being brain controlled. This means JSA has already lost half of their attack team in Barbara, Pat, and Justin. So I see this going 1 of 2 ways based off the comic book laws of brain control. 1) Hit them so hard in the head they wake up or 2) Hit them really hard to knock them out and then save the day break the mind control. I wouldnt mind seeing 1, just because I wanted to see more of STRIPE and Shining Knight but I have a feeling they are going for number 2. I feel partially robbed right now because of the lack of STRIPE and Shining Knight in the show.

Speaking of Shining Knight, I just realized that since the Arrowverse shows and the Stargirl shows are considered different Earths, that CW is going to milk this in a couple of years and make the Starverse which will all be Stargirl characters. Seven Soldiers of Victory show inbound where Justin goes out to bring back the team to fight a new threat.

Actually thinking about Shining Knight a bit more, his horse Victory probably was kidnapped by the ISA and is hidding in the tunnels. Maybe the JSA finding it will break Justin of the mind control.

Overall solid episode. My only complaint is its a 2 part episode and I despise this with a passion. This is a streaming service, just make the episode into a 2 hour movie and be done with it. But the again that interferes with the CW so that wont work. Sigh.

) what a first part for this two part finale!

Pat versus “Crusher” is everything I expected it to be (and more), and way to go Mike in the big save!

Barbara’s reactions to Courtney were also “amazing” and their fight with Tigress was a lot of fun. With the Fiddler’s opinion on Artemis, perhaps Artemis might start as a villain of sorts to then turn another leaf with the new JSA later?

I also had thought perhaps the key for Rick was going to be the year of the Mustang. Those toilets were also probably the cleanest so thank you Sir Justin.

Definitely also a different twist with all the the adults being mind controlled instead of the kids as see in the comics. Stargirl v. Pat will be fun, although with this contest provided by BestBeastBoy seen below we know how the fight may go…

Who Would Win? Stargirl vs. S.T.R.I.P.E Polls & Quizzes

Welcome to our speculative stadium, where legends duke it out and winner takes all! All what? No one knows! We’re just here to have fun! Stargirl is finally here! Literally right here on DCU! If you haven’t seen the star-studded first episode, go watch it now! It’s already proven to be a must-watch series, and I for one can’t wait for another episode. But for now, we’ll just pass the time with a Who Would Win! Which of these star-spangled heroes would win? Yeah, that’s a mech, but she’s got th…

Looking forward now to how the final battle will play out and what other fun surprises may be in store during the finale!

Knight showing up to the final battle. 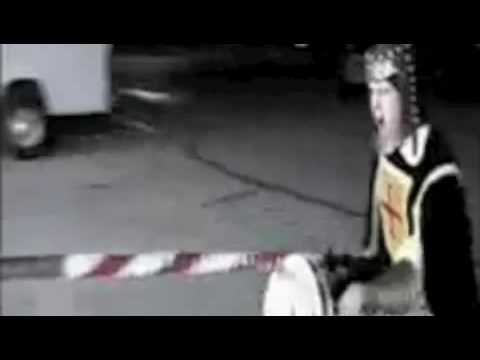 Can’t wait to see what happens with Isaac and Artemis in Season 2!

Not sure why villains always need to antagonize one another and then are surprised when they are killed. Funny thing is, the ISA may have stood a better chance of winning if they hadn’t attacked Courtney and her family and fortified the tunnels instead.

I thought it was interesting to see Pat stand up to Mike, but I was not expecting him to clam up when Mike threw his hand up and walked away- that’s a lot of disrespect (although I understand their dynamic a little more than I initially said).

I didn’t understand the whole boy crying about being a tubat***.

The fight scene between Pat and Sportsmaster started off fine, but wish they both stayed silent and fought.

Justin interrupting the journal deciphering to clean the bathroom made me laugh, it was very unexpected.

The ISA’s plan seems rather silly and if humans are such “monsters”, bringing in politics seemed a little off.

I may have had other things in mind, but those were the main ones.

Edit: Also, unsure how the kids can beat the villains.

Edit 2: Not sure if mentioned (and I believe this is my final note), but Brainwave’s machine reminded me of Professor X’s Cerebro.

Great show!! Can’t wait for the next episode.

That was intense and unexpected. I didn’t think Brainwave would begin controlling people’s minds already. I expected for the Injustice Society to be stopped before they even began. This is really interesting. I can’t wait for the next episode.

It was such a great episode, and I’m glad that Mike finally knows the truth. He was acting kind of brat when Pat was trying to explain it to him, but he is in middle school and that’s how a typical middle school kid would act.

ISA’s goals may have good intentions with ending discrimination and embracing renewable energy. However, they are taking away free will and killing 25 million people in the process.

Most importantly, this episode caused me to crave some KFC

Based on his next few appearances Pat was really pissed at him for that.

The fight scene at the beginning is one of the best fights I’ve seen in a while. I liked the switching between the two fights. I loved Sportsmaster teaching Pat while he was trying to kill him. And Barbara trying to help but kinda being in the way.

“Are you sure we’re on the right side here.” Is probably one of the single funniest lines I’ve ever heard. And it makes sense. Jordan wants a New America where everyone is safe and the planet isn’t dying. Killing 25 million people to get a safe planet seems to be a good price. And it was nice to see the heroes debate themselves for a minute before realizing that 25 million people will die.

I’m happy that the Mustang ended up being important. And that Justin tried his best to help. I was hoping to see the Shining Knight in action but I guess we have to wait to destroy the machine first.

I did enjoy the 30 minutes fake out. That was a great idea. Their New America takes place after the minds are fully reprogrammed. So their countdown doesn’t end when Brainwave starts; it ends when he’s done.

Could be Mr. America. Good call. My first thought was Speed Saunders, Golden Age detective and grandfather of Hawkgirl.

Great set-up for the finale. I was also taken aback by the ISA’s manifesto. It seems that they genuinely want a better world but are willing to do terrible things to achieve it. That was an interesting twist and it humanizes the ISA beyond just a standard “take over the world” villain plot. Their plan reminds me of Ra’s al Ghul from the Batman comics - Heal the environment and create a more just society but slaughter millions of people to do so.

I was really hoping to see the Shining Knight suit up for the final battle. I hope he survives and stays part of the supporting cast.

I was not expecting the Fiddler to be taken out like that. Kind of a waste of the character, like the Wizard earlier in the season. But they were definitely foreshadowing Isaac taking over the family business. My guess is that we’ll see a junior ISA as the villains next season - Shiv, Icicle II, Artemis, Fiddler III, maybe some others. Geoff Johns’ JSA stories have always been big on legacies.

Sportmaster does some truly awesome work with the bat. Is this CGI or did he practice enough to bounce the bat off the floor behind his back from one hand to the other?

That twist at the ending reminded me of Watchmen.

It’s great that people are liking this but comparing Watchmen to this. Please don’t.