[Superman Fan Club] and friends, please dive into this curated selection of Silver / Bronze Age goodness, this time featuring dueling Batman and Superman bright spotlights, Superman: Coward plus Wonder Woman stops by to say “hi” !! And…since many of you are already shoveling snow in October, how about two stories dealing with ice and snow creatures??? 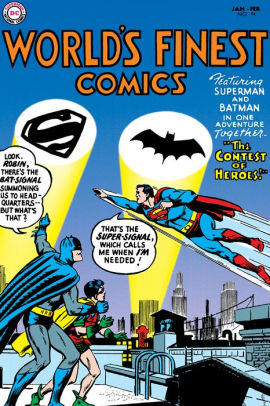 ACTION COMICS (1938-) #322 DC Universe “THE COWARD OF STEEL!” The Superman Revenge Squad exposes Superman to a ray that will turn him into a coward! Plus, in “THE PLANET OF OUTCASTS!” Supergirl is invited to visit the planet of Feminax, where Supergirl is revered! 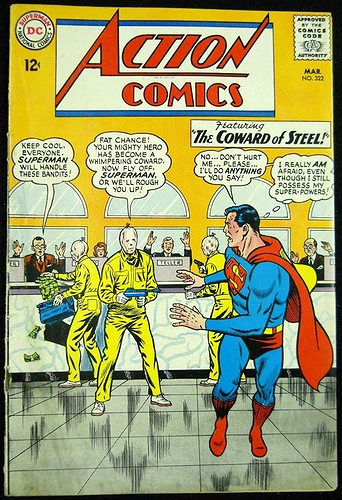 DC COMICS PRESENTS (1978-) #9 DC Universe A giant ice sculpture comes to life and Superman and Wonder Woman must save the day!

Superman (1939-) #266 (August 1973) DC Universe “THE NIGHTMARE MAKER!” Superman learns that the rocket that brought him to Earth also awakened the Abominable Snowman! 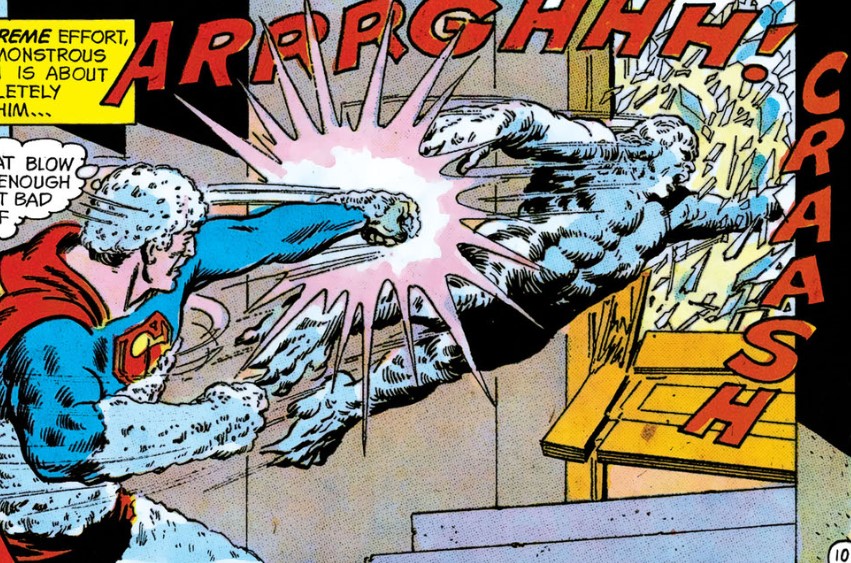 WORLD’S FINEST COMICS (1941-) #74 (January 1955) DC Universe An automated rocket returns a shape-shifting alien to Earth, where it wants to play games with Superman and Batman. 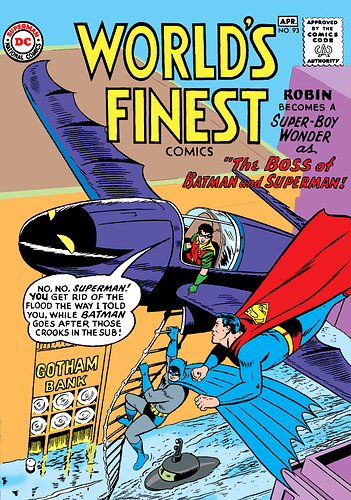 Which cover is your favorite this time around?

Which story works best for you?

Let us know your thoughts below as well as sharing favorite art from these classics!

So instead of a haymaker punch, would the above scene be a snow maker punch???

That’s the book I’m most looking forward too. The early’70s stuff is just killing it for me, plus we got the abominable snowman

Wait til you see who guess stars next time from DC Comics Presents!

In Superman 2, Superman tell Zod that he’s not a coward. This should be a interesting read!

Well, just read this Wonder Woman Superman story, which is nice and fun fight against a snow sculpture and saw who’s up next. Good stuff.

The next DC Comics Presents looks to be a unique team up!

Both of the World’s Finest stories were fun reads. I’m sure I’ve seen the alien who just wanted to play somewhere else before. Either they recycled that idea or it was on one of the animated shows. Robin as The Boss of Batman and Superman is one of those stories I’m sure they thought of the title before they wrote the story.
“Okay, Robin’s in charge and bosses Batman and Superman around. How do we get there?”
But, still nice read.

They sure are. You got to think it must have been fun coming up with these crazy stories at the time in planning sessions with the editor.

I was just filing some comics I just ordered of the late 90s / early 2000s Image “Supreme” series, the run by Alan Moore where he referenced the Silver age Superman stories, basically doing a loving tribute to the no-brakes imaginative era with Supreme.

I still have about maybe 10 of the series by Moore to go, including this one below.

So he is doing a tribute to Superman right? I’m not crazy here am I? 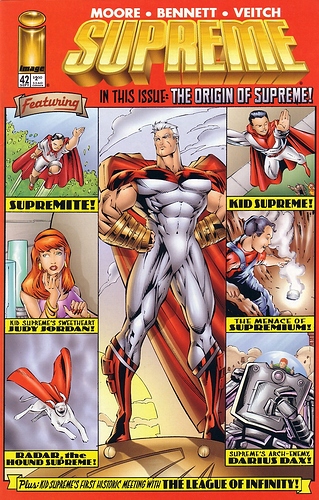 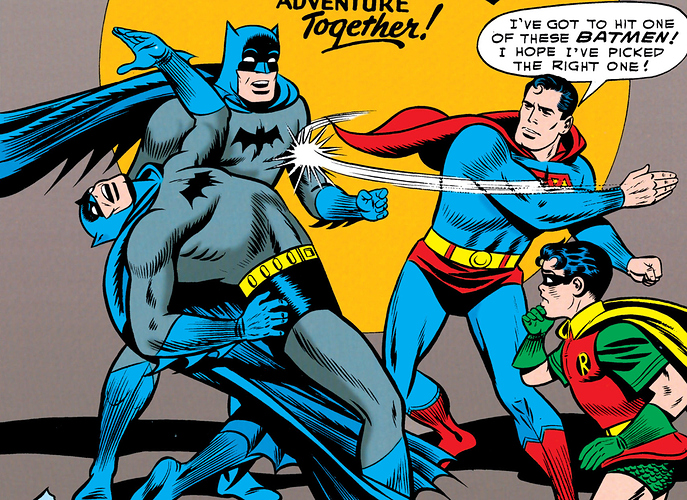 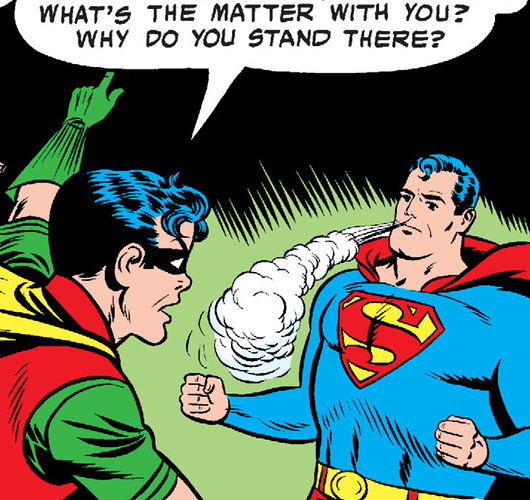 The first story in Action #322 is fine, Clark is more of a chicken than every, but why ‘Clark’ and not Superman doesn’t really make sense. The Supergirl story is great in a Silver Age Supergirl kind of way. Love the entire setup of Plant Girl, Time Girl, and Music Maid and the planet Feminax, and the big twist. My only question is ‘are Lady Macbeth, Borgia, and Mati Hari really the most evil girls in human history?’ Pretty sure we can find worse than them. But lots of fun.

During the 1960s right through the 70s really, the DC writers of Superman really obsess concerning what it means psychologically for Superman to have a Clark Kent identity along with the Superman identity. It doesn’t surprise me that they could envision a situation where the person who’s both Clark and Superman would have fear when he assumed the Clark persona but then fearlessness when he was Superman. The issues not digitized here, issues 296 to 299 of Superman, are kind of a final statement on all this in my opinion. In that storyline, weirdly Clark suddenly has no powers when he’s Clark but he is super when he’s Superman and he’s trying to decide which one he wants to be forever.

Wow that Supergirl story really piles on the tension and it’s a cliffhanger no less! These are some of the sickest villains I’ve seen in a while in the 60s. I’m not sure we can call a story written 55 years ago a cliffhanger, lol, but there you go.

It’s a cliffhanger to me. Would be nice if they digitized those Clark/Superman stories

Nice little Abominable Snowman story. The art of course elevates it a good bit. The thing that I keyed in on is that they placed Kal el’s rocket landing on Earth 27 years earlier, making Superman roughly 28’ish. I always think of Superman as more early 30s.

That’s one of the intriguing floating points of Superman mythos. How old is he? This early 70’s story assumes late 20’s, so a newish reporter recently graduated from college.

New 52 launch Supes was barely 20 I assume, which left lots of room for learning the hard nicks and scratches way (or a pile of ash schooling).

Currently I assume he’s early 40’s with what was a 10 year old kid.

The only version of Superman that I really don’t enjoy reading at length would be the original version right up to about 1950. It’s funny because I really enjoy the radio serial, and that indeed is the 40’s Superman. Maybe it’s the art and villains in the comics of the 40s for Superman I don’t find compelling in print.

I like Golden Age, but a story here or there is enough. Don’t need to binge it