I’m not going to be talking about the cancellation. Mainly because I have already made myself go to Hell trying to understand why such a thing would happen. Instead, I am TRYING to make peace with it, but also I want to focus and appreciate the episode we will still get. SPOILER AHEAD!

It picks up right where the Pilot ended. I know I already said this in my last review, but Crystal Reed is amazing as Abby Arcane. But speaking of her, we learn something very interesting about her relationship with the Sunderlands. Apparently, the Sunderlands adopted Abby and raised her back when she was roughly 8 years old or so. This adds a whole ne complex layer to her current strained relationship with Maria as well as gives us an idea of what her relationship with Avery must have been like as well as what it might be like moving forward.

Speaking of Avery, we do get confirmation that he is responsible for the accelerant chemical being dumped in the swamp. Why? Typical business reasons, more plants/trees dries up some water, creates more land that can be developed. But he calls in the scientist that created the accelerant, Dr. Jason Woodrue - and his wife (I guess he has a wife in this version. Could be interesting, depending on what happens in the remaining episodes) - and he demands that Woodrue fixes the disease that he believes is caused by the accelerant. Woodrue seems pretty damn confident (and arrogant) that his accelerant is not connected to this disease in town, but promises to do so anyway because he is on Avery’s payroll. Hey, he may be a shady businessman, but he still has some morales I guess.

The girl Susie (I hope that’s how you spell it), also known as patient zero, seems to have some sort of connection to the newly created Swamp Thing. She escapes and goes out looking for him. She comes across a bad guy, and of course Alec intervenes. This confrontation is a really exciting scene for a huge Swamp Thing fan like myself. Plus, the way he chooses to end this skirmish with the bad guy - while admittedly not pitch perfect CGI - is still entertaining. Don’t worry, Swamp Thing himself is all practical effects and it is beautiful. I am so impressed with how good it looks, and the fact that even though there is so much, emotions are still easily expressed facially. I have to give the effects department huge credit for that.

Of course, once Abby gets Susie back, the girl does tell her that Swamp Thing is Alec and that he is afraid of what is happening to him. Whether or not Abby actually believes Susie is saved for the next episode. Also, formal introductions to Matt Cable, who is exactly who I thought he was going to be in this show, which is still good; Madame Xanadu, who so far I think is pretty cool; and Daniel Kassidy (Blue Devil). Admittedly, we don’t a lot of time with him, but I like him and look forward to seeing him again. Also, what was up with Maria’s ending in that episode?! I mean, I know this show is embracing the supernatural, but I have so many questions about that ending bedroom scene!

So yea, I love this episode just as much as I loved the Pilot. Let me know what you guys thought. Again, I just want to appreciate the episodes we will still get and try and make peace with this whole cancellation drama, so try and focus on just the episode 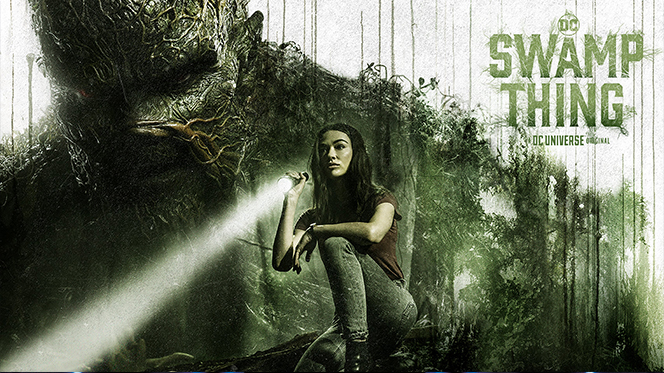 Madam Xanadu talking about the shift in light/dark made me raise an eyebrow. Interested to see what thats about.

Shauna’s corpse in bed with her mother? Can’t wait to see what thats about.

Susie’s apparent connection to the green. I dont feel its just Swamp Thing since she perked up during that scene with her father, I believe it’s the green in general.

Cant wait to see Cassidy as Blue Devil and I hope we get Jason Woodrue as Floronic Man before the end of the season.

And finally, the way Swamp Thing deals with the goon

Yeah when that dude got torn apart that was brutal!

I really enjoy how they develop Avery’s character in the show. The first episode presents him as a good and moral man. The beginning of the second episode hints at his true self, and seeing him go full mafia towards the end really raises my concerns for the main characters. I really like what they’re doing with the show.

I loved this episode and am really happy with the series so far. I’ve been very impressed with the writing, acting, and special effects. More than anything, I love how they’ve introduced the Swamp Thing and his powers. The fight with the goon was fun because it excedeed preconceptions about what he was capable of. The show also has stronger horror elements than I expected but I’m happy about that. What’s the deal with the ghost daughter in bed?!

I started my own thread, only because I didn’t find this one in time. I am in agreement with all of the above. In my other post I stated something to the effect that I have watched every episode of all of the live action series DC Universe has produced so far and it is my opinion that this episode (2) of Swamp Thing is the best one they’ve done yet. I stand by my 1 complaint about Alec Holland’s character in this series, but if all of the upcoming episodes are as good as this one, I’ll let it pass.