*Teen Titans* Random Two Episode Watch-along with a Break In Between: Stop By If You Want — Saturday, September 12

Yup, you read it right here, folks! Every Saturday for five months, we’ll watch two randomly selected episodes of the Teen Titans cartoon. Since they’re not necessarily in order, there will be a break in between both episodes.
Do you want to be part of this watch-along? Continue reading below.

Who?: Anyone reading this far into the thread
What?: Teen Titans (2003)
Where?: Anywhere you can access a DC Universe subscription—legally
When?: Saturday, September 12th, at 6:00PM PST/9:00PM EST
Why?: Because we’re like family, so we have to hang out. (Also because it’s fun.)
How?: Like this!

When an alien probe shows up to haul Starfire away, Starfire has no idea why it came. And when Starfire’s sister, Blackfire, shows up to visit, Starfire just wishes she would leave. Blackfire’s wild, cool and hip, everything Starfire’s not. 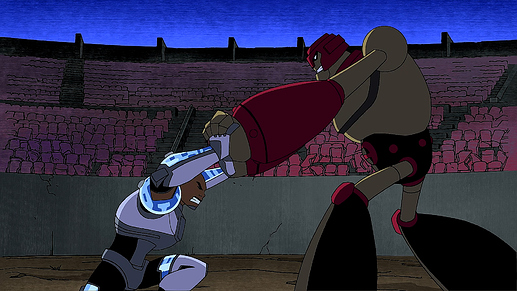 When Cyborg was a fully human athlete, he loved trying to do more than he thought he could do. He always gave 110%. But now that his muscles are mechanical, Cyborg’s limitations are built in. No matter how much he tries, 100% is all he’s got.

So call your family together—evil siblings included—and give this watch-along 110%, because the watch-along for these two episodes starts tonight!

Have fun tonight! I will not be able to join this week, but am planning to make next week.

The watch-along starts in an hour!
We’ll still have enough time to see the last panel of Fandome!

Only Human has a great Robin moment when he turns The Mechanic.