The Clubs of the DCU Mega Quiz II 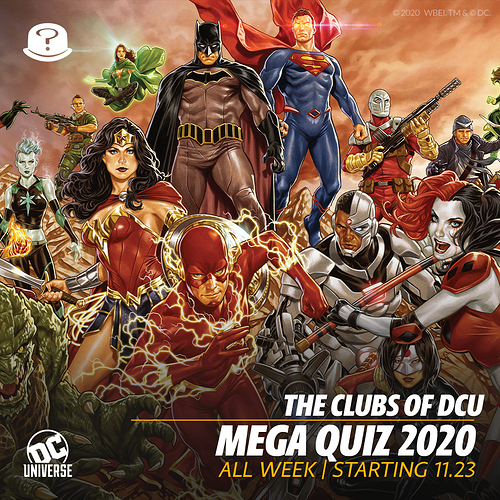 Welcome to the Clubs of the DCU Mega Quiz II. Think you know about the greatest characters, stories, creators and history in comics? Then this is the place for you. Clubs from across the DC Universe have submitted questions to test your knowledge of DC comics, movies, animation, live television and history. Have fun with the quiz and let us know how you did below!

Want more discussions, polls and quizzes about DC? Check out these clubs that cover every corner of the universe and join in the fun today!

Score:
1-5: Well the good news is that there’s always more comics to read on DCU!
6-10: You’re off to a nice start, so maybe it’s time to dive into a new corner of the DC Universe.
11-15: Well done, you clearly you know your DC.
16-19: I salute you and your deep DC knowledge.
20-22: Somebody had better warn Brainiac, because we’ve got another 12th-level intellect on our hands!

How much to people love Christmas with the Joker? Twelve responses for the question, every one of them right.

I have no idea how I would have done without knowing the answers.

You avoided the bottom tier, congrats

Thanks for the update. Did better than I thought

Welp… I apparently know nothing and need to do a bit more reading. I got an 8. Fun quiz though! I haven’t read much GL, but I really wanted Dex-Starr to have a win

I voted on mine mainly to see who voted haha

One thing I notice while doing the trivia, if I voted same as you @msgtv, I know I’ve got it right, If my answer are different from yours, then I’ve got it wrong.

But what the heck, it’s all for fun, right?

Hopefully everyone enjoys it. I vote first to test the system and of course I was given all the answers to make the quiz. Think I would do okay, but…