In a one on fight

between The Specter (Jim Corrigan) and Spawn (Al Simmons) would win the fight and why and who would lose and why in you one in all opinion?

The Wrath of God Incarnate bs a demon powered Dead guy?!?
Sorry Al. You were a cool character but you might as well throw in the towel.
I’d hate to see what kind of Divine Retribution the Spectre would unleash on that poor roasted soldier.
Winner and still champion 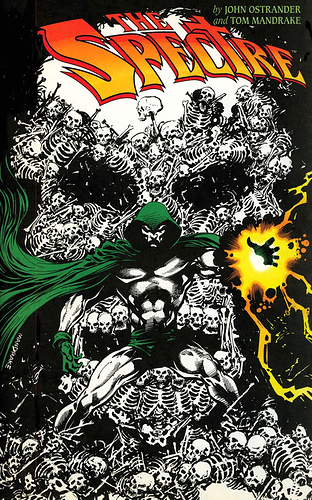 The winner, and still champeen: The Spectre!

Spawn is rad, sure. However, and along the lines of what @golddragon71 said, one is the physical manifestation of God’s wrath, while the other is an agent of Hell, who turned on his bosses to do good.

In the end, Spawn may have killed the devil, but God’s wrath is infinitely more powerful. As cool and powerful as Spawn is, he would end up as a smear under one of the Spectre’s booties.

Have to give it to the Spectre, for all the reasons already expressed, and it would be a bloodbath.