I’ve seen a lot of people in the community express discontent toward Tim’s new codename: Drake. Hell, even I’ll admit even I’m not too fond of it. Just it being his last name makes it weird to me. Many have said he deserves his own graduation arc and well thought out persona like Dick had with Nightwing in New Teen Titans and I actually agree. Damian’s not going anywhere so he deserves to be more than a perpetual Robin who can’t be Robin anymore.
So I thought I’d make a thread where people could spitball their ideas of new codenames for Tim and why. I’m actually curious to see how everyone sees the character. I’ll go first.
My first thought was Condor but I wasn’t feeling that one. So I thought Sparrow from the Amalgamation Universe but I wasn’t sure. Then I thought Cardinal because of the red and Red Robin and y’know the color cardinal red. That felt better but I realized I’m tired of birds. If he’s gonna graduate to something unique and original to him and his character then a bird wasn’t the way to go. So my final thought was with his tech, hacking, and detective skills a great name for him would be Sentinel. It’s a soldier whose job is to keep watch.
What do you think? What new codename would you give Tim Drake?

Redwing? Or is that too derivative?

Redwing was the name of his car, his version of the Batmobile. Not saying that rules out the name, just random fact I know.

I’m actually here because I’m confused, in the Young Justice books he’s used as the Drake yet in Batman he’s Red Robin. Why is that allowed to happen?

Honestly, this might be controversial, but I think the best way to go would be to take him out of the superhero game entirely. Not kill him off or anything, but sort of like what was hinted at in Tynion’s Detective run, let him go off to college, make a name for himself as Tim Drake, and maybe he can show up every once in a while as a tech guy.

OR, if they want to keep Barbara Gordon as Batgirl (and honestly that’s what I’d want more)…let him be Oracle. He feels like an odd man out, that’s a role that’s sort of vacant right now, and it’s a role that fits him. I think that’s a great transition for him.

But then, I do find Tim to be rather overrated and I wished that Stephanie Brown stayed as Robin when she got the role instead of him, so…YMMV.

I never thought of that. Not a bad idea actually. Though it looks like they’re gonna make Cass Batgirl again, Steph is gonna continue as Spoiler just with the bat symbol on her chest. Barbara seems like she’s headed to getting her implant removed and back to the wheelchair and being Oracle. Even though I personally would rather see Steph as Batgirl (I just like her character and suit better than Cass). But hey…

what’re you gonna do? The Batfam has become like mutants. There’s too many and they don’t all fit neatly into a timeline. Not everybody really has a role and Tim is one of them.

Though it looks like they’re gonna make Cass Batgirl again, Steph is gonna continue as Spoiler just with the bat symbol on her chest. Barbara seems like she’s headed to getting her implant removed and back to the wheelchair and being Oracle.

Maybe? James Tynion said today on his newsletter that Barbara Gordon will be front and center and that fans who missed her as Oracle will be happy. It could mean she’s retiring the mantle, it could mean she’ll still be Batgirl but also have her Oracle stuff going on at the same time, could go either way right now.

For me ideally, what I would love is if they just let all three characters be “Batgirls.” Hell, I’ve been wanting a book with the three teamed up together for years. Plus while it’s a different universe, there is some precedent for it: 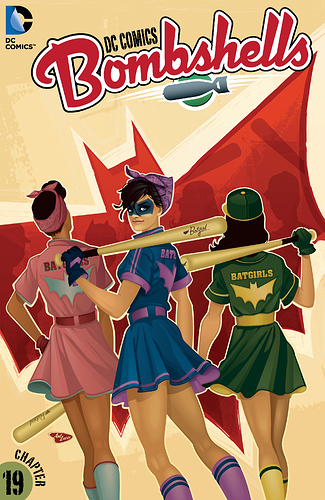 See, I’m not a fan of that idea at all. Why do we need 3 or even 2 Batgirls at the same time? It’s confusing even if they all get different costumes and have wildly different characters. Like will the real Batgirl please stand up? Who takes center stage in the Batgirl title? We already have Batman, Robin, Batwoman, Tim, Clayface, Gotham and Gotham Girl all fighting crime in Gotham so you also wanna add 3 more Batgirls to that list? It’s just too much. Just pick one and do something else with the others. I mean, I’m not opposed to them all teaming up I just don’t think they all have to or even should all be Batgirl to do it.