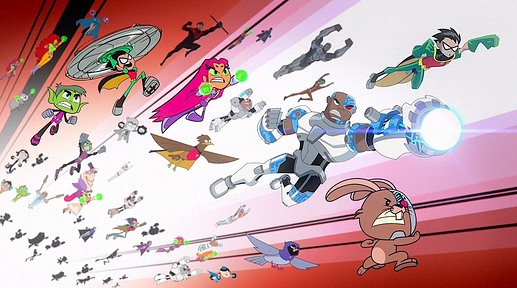 image1200×670 149 KB
This thread is dedicated to either three of the current Teen Titans series. Don’t know which is which? You’re not alone.

Keep on reading below: 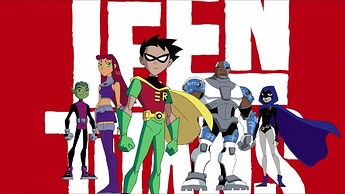 image1280×720 149 KB
This angst-filled series from the early 2000’s was the first maxiseries to be named after the Teen Titans. The series starred Beast Boy, Starfire, Raven, Robin, and Cyborg in Jump City battling a handful of classic as well as cartoony villains. The chief among these was Slade, depicted as the one-eyed assassin determined to take down the titans. The show was animated in an art style that would later be called “Murakanime”, named after one of the workers on the show. It lasted five seasons (one more than the writers intended) before getting cancelled after the cliff-hanger episode “Things Change”. Although the box-office failure of Teen Titans Go! vs. Teen Titans has extinguished any chances of a sixth season, the series remains as a critically popular icon for millennials. 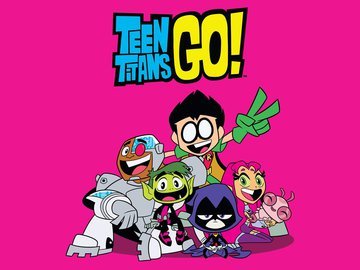 Made 10 years after the preceding series, Teen Titans Go! focuses on the same five cast members depicted above. These titans regularly face everyday problems, anywhere from chores, to boredom, to Santa’s naughty list. The show is animated in a simple, Lilliputian art style, including its various guest stars, such as Batman and Commissioner Gordon. The show is a first for any Cartoon Network or DC cartoon; having yet to be cancelled, the series sports over 300 episodes full of either rib-tickling, cringeworthy, or off-putting comedy. 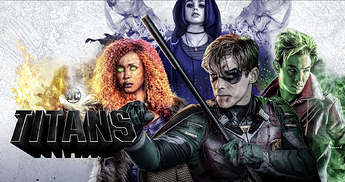 image1889×1000 2.05 MB
The first DCU original to grace this very app, Titans is a TV-MA live-action show that became available in 2018. The series has a far more diverse main cast than either of the two series mentioned above, including the likes of Superboy, Hawk & Dove, and Wonder Girl. It was created by Akiva Goldsman (Batman Forever, Batman and Robin), Geoff Johns (Young Justice), and Greg Berlanti (Arrowverse), but it was originally intended for the channel TNT. This series is currently on hiatus, but it joins many of the award-winning content on HBO Max!
4 Likes
OFFICE HOURS VOL II: Ask DC Universe Your Questions Every Tuesday Night!
Young Justice ReEp Watch-along — Wednesday, November 25 @ 6:30PM PST/9:30PM EST
malachi.howard.63544 October 17, 2020, 10:13pm #2

Do you guys want a theatrical sequel to Teen Titans Go! vs. Teen Titans crossover? I definitely want one.

Here is an idea of a story for a sequel to Teen Titans Go! vs. Teen Titans: after the events of saving the Titan Multiverse with their very, serious counterparts from each of their worlds’ Trigons, and their Raven accepting who she is, the goofy, silly team of Teen Titans Go! once again joins forces with the serious team of Teen Titans to stop the Slades (both Ron Perlman, the OG team’s Slade, and Will Arnett, the Go! team’s Slade from Teen Titans Go! To the Movies), the Blackfires, the HIVE Fives, and all of the other villains from taking over the DC Universe and destroying and erasing each and every other Earth of Titans (from the last movie, Comics Titans, Baby Titans (the Tiny Titans), Toon Titans, the Real Serious Titans (the Titans from the DCAMU movies), Night Begins to Shine Titans, Protein Titans (the Teen Titanimals, the name I pick, because they’re all a bunch of animals, while their Beast Boy is an ordinary human), Bizarro Titans (Nibor, Erifrats, Nevar, Grobyc, and Boy Beast), Zombie Titans, Steampunk Titans, Handsome Titans, Mermaid Titans (the Sea Titans), and many more other teams of Titans) off the face of the Earth, and they have to work together to save all of the Infinite Earths of Teen Titans, once again, but this time, with the power of Titanic awesomeness, even if one team is serious and moody, while the other are just light-hearted, crazy, but charming goofballs.

So it turns out the Red Hood costume for Titans has been revealed.
I think it couldn’t be better!
Thoughts?

The crossover movie was so clever because you see the big tough Titans, and the massive Trigon, and you naturally assume they’re the powerful version. But the Gos live in the Roger Rabbit universe where they can do anything they want, as long as it’s funny. And what’s funnier than the guy that thinks he’s sooooooo cool getting his butt kicked.

Has anyone watched Titans?
Are there any scenes that are too mature?

Teen Titans Go is the best.

Exactly, Teen Titans Go! always has some interesting jokes, some meta, nostalgic, and self-aware. They even can make references around the DC Universe, and other familiar characters, like Scooby-Doo and Mystery Inc. gang in Cartoon Feud, and Beetlejuice in Ghost of the Most. They can also make impossible things happen and it makes total sense, like dealing with Santa Claus, going through Titan dimensions with incarnations we never heard of (Mermaid Titans, Steampunk Titans, Protein Titans or Teen Titanimals, Comic Titans, 60s Titans, Toon Titans (Titans who act like cartoons back in the 20s), Real Serious Titans (DCAMU Titans), and even Baby Titans (Tiny Titans)), or going to Hollywood with every other hero in the DC Universe to get a movie. With weird ideas, jokes, and sketchy edginess the Go! Titans can throw at, they are obviously the reasons why Teen Titans Go! is one of my favorite cartoons of all time, next to the original Titans, even though they can be like the goofy little brothers and sisters to them, they are still crazy enough to work as an excellent superhero team with good humor, jokes, and snarkiest.

I own some Tiny Titans comics, like the first 6. I’ve never read them, i just had to have them. This is weird and i support it.

I like the original better. But the episode where they gave steroids to a clown was sublime. I was stunned at how genius it was. That was first five years of the Simpson’s level. That was Bobo level.

And i love grim and gritty, but i sympathies with the people that say old bearded white guys have stolen the children’s toys, and it’s creating a generation of cynical a**holes.

Has anyone watched Titans ?
Are there any scenes that are too mature?

Like when they talk about Santa Claus being a sneaky villain, trying to take over all of the holidays and have everyone on the naughty list, this guy definitely deserves all that beating from the Titans and his torture in the mall in December in Teen Titans Go! vs. Teen Titans.

I choose both of the teams, because I can’t decide which is better, Teen Titans has good action, drama, and adventure, while Teen Titans Go! has great comedy, some interesting action, interesting character development, genuine self-aware humor, well-made Easter eggs from the entire DC Universe, and good trippy animation that fits the humor and the characters personality very well, so I think both of these teams of Titans are my most favorite and I grew up with both of them as well. Even though they are different, one is action-packed, dark, and more Batman-esque, while the other team is goofy, comedy-filled, energetically colorful, sometimes dark and edgy, and trippy, but in the end, they are still both Teen Titans, like in the song from Teen Titans Go! vs. Teen Titans, when both the teams have to team up with each other to save their Ravens and the entire Multiverse of Titan teams from both of their Trigons (2013 resurrected 2003, minus a leg).

It’s for preteens, tweeners, whatever. It’s just dangerous enough that a kid that age would feel like it was adult and serious, but a 7 year old might get upset by it.

You don’t have to chose, that was the point of the movie.

In my book, as a DC fan, an artist can do whatever they want with the ip, but then we get to judge them for it. I don’t get nerd ragey about continuity or the integrity of the characters. But if you make bad art, you suck. I think a lot of people see something that fails on an artistic level, and try to explain why with nitpicks. They don’t have the language or literary understanding to explain why the story structure collapsed, so they say, that’s not the right costume, or whatever.

Is there any word on the new TTG / DCSHG crossover yet? 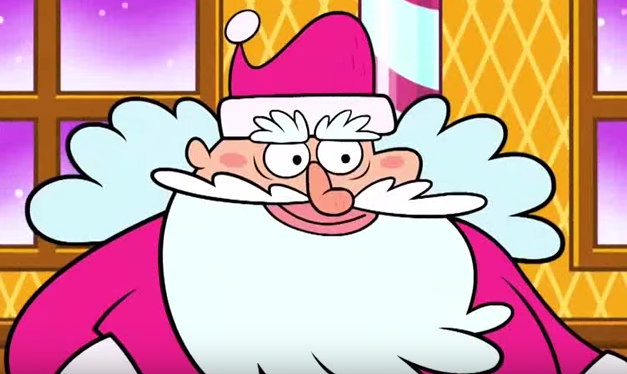