Voice Acting in the DCU

I have always loved watching cartoons. In fact, animation is what got me into the DCU. Shows like “Teen Titans,” “Justice League,” “Justice League: Unlimited” and “Young Justice” introduced me to the world of DC comics. I thoroughly enjoy the DC animated movies as well. And, justice like there are different iterations of our favorite characters on the page or the small screen, there are different iterations of the same characters when they are voiced by different actors. Whether it’s Tara Strong’s Raven in “Teen Titan” or Taissa Farmiga’s Raven in “Justice League vs. Teen Titans,” or Mark Hamill’s Joker or John DiMaggio’s Joker or Bruce Greenwood’s Batman or Kevin Conroy’s Batman, each actor brings something different to the character.

For me, as an aspiring voice actor myself, I really look up to Tara Strong. I loved her as Raven in the original “Teen Titans.” I think she gave the character the right amount of attitude and seriousness to Raven. When I found out she played Terra Markov in “Young Justice,” I was kind of confused because usually, I can pick out her voice. She did a really good job with her accent to bring the character alive.

@NiCole_Centofanti I love Jeffery Combs as the Question in JLU. He gave such a great performance mixing strength and crazy to create a character you could care for and fear.

Ron Pearlman as Slade in the original Teen Titans cartoon was excellent. And I always have to give love to the Kevin Conroy voice. He’s been the voice of Batman basically my entire life.

Heck freaking yes, this is what I’m here for! Voice actors are so great and I am here to love them!!!

@NiCole_Centofanti I love how much you love Tara Strong. She’s so talented. And she has gotten so much out of DC, from Raven to Batgirl to Harley! I have not seen S3 of Young Justice yet, but I really look forward to hearing her Terra.

Jason Spisak is a recent favorite of mine. For a while I only knew that he voiced my least favorite character in Star Wars The Clone Wars and didn’t think much of him. But then I heard him as Kid Flash and he was great, then I heard him as the Penguin in Telltale Batman and HOLY CRAP he was great, and then he was the Joker in Batman: Hush, and forget about it! That guy is amazing! DC Universe had an interview with the cast around when Hush came out, and he was talking about how constructing the Joker’s laugh is like writing music and I was just like dang, okay. My appreciation of him has grown a lot in a very short time! (I think he was Lego Red Hood recently too.)

One of my favorite voice casts is the Batman: Arkham City video game. Corey Burton is absolutely chilling as Hugo Strange, Grey Delisle is the most flawless Catwoman, Dee Bradley Baker as Ra’s Al Ghul is a weird casting that works, Kimberly Brooks is the best Oracle there ever was, Nolan North (Superboy himself!) is a heck of a good Penguin, and WOW, I really wish we could hear more of Maurice LaMarche as Mr Freeze someday. Khary Payton is also Azrael, Troy Baker is Two-Face, and we get to hear Kevin Conroy as Hush, which is RAD. One of the most perfectly cast Batman things, in my opinion.

Couldn’t agree more about the Arkham cast. Asylum and City were what really got me into DC, and I still use most of those actors’ voices for reading characters’ voices from the comics

I really like Kevin Conroy as Batman. Diedrich Bader wasn’t bad either. And I am 100% a fan of nearly everything from the Justice League Action series (especially P.J. Byrne as Firestorm and Jason J. Lewis as Superman)

Diedrich Bader’s Batman is so great. I’m happy that they got him back for the Harley Quinn show.

I have only seen the shorts of Justice League Action so far but agreed, the cast is 10 out of 10. Jason J. Lewis’s Superman is particularly endearing.

One of my all-time favorite DC voice actors has to be Mark Hamill. He really brought the Joker to life for me, and to this day his is the manic laughter I hear whenever I think about the Clown Prince of Crime. 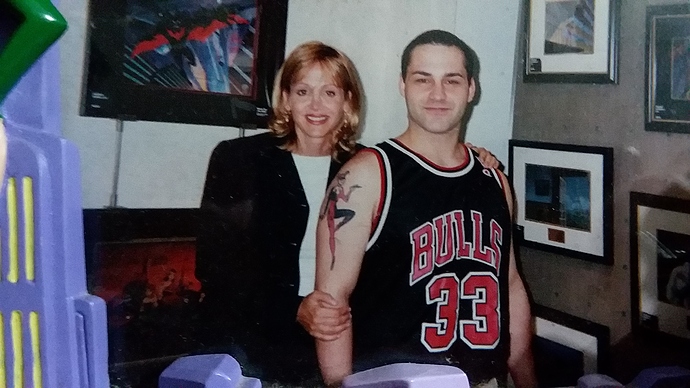 Oh yea Sean Maher is a great nightwingas well, and my favorite actor to play a character period, whether its live action or animated is Matt Ryan as Constantine. Don’t get me started on my man crush on that bloke, he lives and breaths Constantine.

For the most part, all the voice actors from the 90’s/early 00’s DCAU are perfect, IMO. Probably more nostalgia than anything, but those are still the voices I hear in my head when I read comics.
But that’s not adding much to the discussion, so I think someone should mention Kevin Michael Richardson as the Joker. I wasn’t keen on everything done in The Batman, but Richardson’s performance was excellent. It must have been daunting for him, following Hamil.

I don’t know where to begin! A lot of the voice actors/actresses played their characters exceptionally well and I can’t unhear their voices for when I read their characters’ words in the comics. Ron Perlman made Deathstroke so likable with his cold and sinister voice. Tara Strong’s Batgirl is phenomenal and it puts Tara as one of my top five favorite voice actresses. Kevin Conroy, Roger Craig Smith and Bruce Greenwood are my favorite Batman voice actors. Grey Griffin makes Catwoman sound amazingly sexy and she is my favorite voice actress in the industry. I hope Kari Wahlgren will soon play Catwoman for a video game or an animated movie with Roger Craig Smith as her Batman. I think those two would be amazing voicing my favorite comic book couple together. With that said, picking favorite voice actors/actresses from the DCU is a major problem for me because they’re all just perfect with the roles they have done.

Michael Rosenbaum is always great in live action and voice acting! As Wally/Falsh in so many works including the DCAU, LEGO movies, teen titans and Justice League: Doom.

As much as I love Hynden Walch as Starfire, I have to praise her phenomenal performances as Permafrost in Static Shock and Ace in Justice League Unlimited. Two characters with incredibly tragic backstories that she poignantly brings to life. Brings me to tears every time I watch those episodes.

Just discovered this discussion group. Wow. About time some props were given to the voice-over talent behind the animation. Had I known about you guys prior to my last post on 'Office Hours’ the other day, I’d have greatly modified it. Please forgive me.

Back in the 60s we had some of the best known v/o talent available. William Conrad, Edward Everett Norton, June Foray, Mel Blanc and Hans Conried among them. Going back to the 40s, as far as the DCU is concerned, we had a guy named Bud Collyer! He was the voice of Clark Kent and Superman, both oh radio, theater and later tv. It was on the radio series that Superman and Batman first met. Allowing Batman to carry much of the story, gave Collyer some badly needed vacation time. A few actors would play Bruce Wayne and Batman over the years. But none would gain the fame that has been afforded to Kevin Conroy.

It was this last observation that gave rise to my post on OH. The long and the short of it, was that Kevin shouldn’t be the only voice of Batman to be recognized. Diedrich Bader knocked it out of the park on all 3 seasons of Batman-Brave & the Bold. But nobody seemed to notice him. I hope now. with this group, we can correct that injustice. I noticed that some of you have mentioned him already. Thank you. Maybe now, the " other " Batman can get out of the shade thrown by his better known colleague.

A lot of my favorites have already been mentioned- Carl Lumbly as Manhunter, Spisak/Rosenbaum as Wally West, etc but I’d also like to mention that Spisak’s acting as Razer in GLTAS was excellent.

Cameron Bowen for his excellent work as Robin in YJ:I and Red Hood in Injustice 2

Also Jensen Ackles really knocked it out of the park as Red Hood in UTRH. He’s way too old to play the character in a live action setting but he did an excellent job with the emotional vibrancy over voice acting.

and who can forget Khary Payton??? YJ’s Aqualad and TT’s Cyborg are two completely different characters with totally different voices and yet he totally nails both of them

I never see anyone talk about JLA Adventures: Trapped In Time, which is a shame because it has a great story. I need more of Jack DeSena’s Robin interacting with Dante Basco’s Karate Kid

Kevin Michael Richardson is a legend, obvs, and his Joker is underrated although as far as I know he’s been in almost every DC animated thing ever