What Are You Currently Reading?

I never read Blackest Night in its entirety. I’ll probably finish it tonight.

Anyone know of any Geoff Johns stories where he was working with more mediocre artists? I’m curious to see what his stories are like without the best art in the industry

I’m down the Knightfall saga rabbit hole at the moment. Meaning I was about to start Knightfall…but then realized there’s a prelude to Knightfall…and the Sword of Azrael miniseries…suffice to say this is less straightforward than I expected.

Ahh, the days of huge storylines across multiple titles that you had to buy a lot of print comics to get the whole story. I’ve still never read the sword of azrael. I think I have all the Knight fall and knight quest comics and everything. I’ve been meaning to reread Dixon’s work on Robin and Batman (nightwing) on the app. I’ve never binge read any of it.

I just started reading All-Star Comics. This is the first Golden Age comic I’m attempting to read as a series (I’ve read Action Comics #1, Detective Comics #27, and Batman #1 to see the legendary first appearances of Superman, Batman and The Joker). I’m only 4 issues in and so far it’s… interesting. Every issue is long (over 60 pages) and very wordy; it takes me an hour just to read one issue. Comic publishers sure gave readers a bang for their buck (or their dime, as the case may be) in those days. The best part of the series is the characters themselves, but the worst part is the actual stories. Every issue contains eight seven-page stories and every single story in every single issue has the exact same villains (generic, interchangeable hoodlums, with the occasional mad scientist thrown in for some variety) and the exact same structure (JSA member stumbles across hoodlums planning or committing a crime, JSA member beats up hoodlums). Still, it is interesting to see what comics were like in the days when creators were still figuring things out, and I look forward to seeing how the series develops, particularly the introduction of recurring villains with actual personalities.

Favorite Characters: The Flash (Probably the team member with the most personality and the most distinctive adventures, so of course they booted him off the team right away. Can’t have him outshining the rest.

) and Johnny Thunder (What a great idea for a character! He and his stories crack me up.). And special mention to Hawkman; not my favorite of the characters, but the art for his stories is gorgeous and stands out from the rest.

Least Favorite Character: Hourman. Boy oh boy, is this guy bland, and are his stories blander! I always mentally groan whenever his story pops up next in an issue. His powers are ill-defined and he just lacks any discernible personality whatsoever. It seems like the writer couldn’t really figure out what to do with him, so the stories end up being boring and interchangeable. I’d be hard pressed to tell you anything specific about any of them. He takes a pill and then punches people and that’s about it. Apparently, he gets replaced by Doctor Mid-Nite and Starman in a couple issues, so that’s something to look forward to.

Most Surprising Character: Green Lantern. Very different from the modern Green Lantern (modern meaning Silver Age and on). Instead of using his ring as a tool and the main vector of his power, the ring instead grants him a variety of random and somewhat generic powers. Super-strength, flight, the ability to walk through walls, invulnerability to metal… and occasionally he’ll shoot a beam of light out of the ring. But only occasionally. Maybe Golden Age Green Lantern develops more in future issues. Or maybe not! I look forward to finding out.

Yeah, event comics have always kind of been the bane of my comics-reading experience (pun intended, but the first Batman comic I ever purchased was right at the tail-end of No Man’s Land and it confused me completely) but I’m finally going to attempt to get through one.

You picked a good one IMO

These ladies just landed in my mailbox. 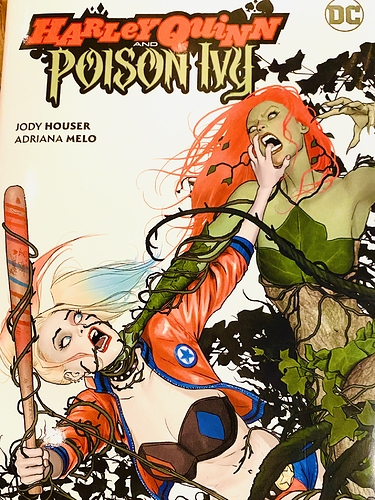 Just finished Superman: Red Son. Pretty good series. I like how it’s a different than the usual Superman we know and love.

On here, I’m reading Mark Waid’s Flash for the first time. Born to Run was awesome! I just finished reading a Garth Ennis Hellblazer omnibus. I think that Constantine might be my favorite character now. I’m now starting Sandman.

Batman The Long Halloween and Crisis on infinite Earths

I’ve got the entire run but haven’t read them yet. Looks like it is a great read but just haven’t had time to get into it.

I need to make time and just do it.

Just finished Scooby Apocalypse and it was awesome. For the start to finish a great apocalypse with a Scooby twist.

I thought it was zombies but it being misters was so much better. I knew about Fred’s death prior but the way it was executed was great. The whole gang was great. Even in this different world they felt like the gang to the core. The new characters were bad either. Some very great stories. I’m the end flew by so fast. A very great run. Who knows maybe they can do more one day or a tv show and or film. But either way this was awesome. Also the side story of secret squirrel Was great. Some classic spy fun. And Atom Ants was hilarious.