What is the first ever comic you owned

Bone by Jeff Smith. I read it at my local library and loved it so much I desided to do the scariest thing I could think of as a 13 year old girl. Actually walk myself into a comic book shop, talk to people, and buy more fone bone. Best decision I ever made

I have no idea, but would guess it was a Looney Tunes or Donald Duck. Maybe Casper? Can’t recall. Just too many decades have passed.

But I do remember buying it. Back then we were allowed to run around the neighborhood and every one watched out for all the neighborhood kids. There was a small family owned store at the edge of the area and they sold stuff like cokes (pop, soda, whatever your area’s preferred term), oil, milk, bread, you know - necessities.

And they had a comic book rack!

I spent the better part of one morning trying to find coke bottles to return for the deposit, $0.02 each. Found 5 and that was enough for the $0.10 cover price for a comic. Went to the store, returned the bottles, and got my shiny dime. Well, this was before I started school, so I must have been around 6 years old or so. Got my comic and handed him the dime back.

He looked at me over the counter and said, “That’s not enough son.” I must have given him a puzzled look because he proceeded to explain tax to me. I needed another penny, which I didn’t have. He then told me to go ahead and take the comic and owe him the penny to be paid next time I came in.

Went home and was reading my new comic when Dad came home. He asked about it and I told him the story and how I owed the Store owner a penny. He sat me down and explained how we should never owe anyone. He gave me several chores (worked my young butt off!) to earn that penny and sent me back to the store to pay it back.

From that day on until he passed, when we talked finances and he thought getting a loan for something was a bad idea he would simply say, “Remember the comic?”.

The first one I purchased was Wonder Woman 2011.

@Lonelylobo What a great story, It really hit me lol. Thank You for sharing epecially on my thread. My grandmother would always tell me she would get up in the mornings as an adult with childen. To watch sunday cartoons and she also would tell me she would watch the batman and wonder woman tv show.

She would also tell me that I need to socialize more, and she would wonder if there were any way I could chat with other DC fans.

And well…Here it is lol
Thanks for sharing
And Thanks to DC Universe for having a community tab.

The first ever comic I purchased was Marvel’s Transformers issue #4. ( Nowadays it’s referred to as the Classic Tranformers which IDWs Regeneration One was the continuation of.) I got a lot of other comics that day but that one was the first one that the clerk at the comic shop entered the price of that time. (Back then everything was still done manually. Man do I feel old. )

I actually ended up going back a few hours later to get issues 1-3 from the back issue bins and I got a discount on them. He only charged me .50 cents for the three of them and I believe they were .75 cents a piece. I remember being over the moon about that because it left me with just enough allowance money to stop for ice cream at the soda fountain on the next block.

I am not sure. I was so young. But judging from my early back issues and their conditions it was either Peter Parker 11, JLA 1st series 127, Superboy and Legion 219 or it could be one of several Action Comics from the seventies. Thank you for showing my age on here.

I also had the full run of Leaf Candies mini comics and a big Superfriends book that was old justice league reprints in this time frame of 1980-81.

My first comic was a Buffy the Vampire Slayer comic that was a tie in to the Chaos Bleeds videogame. 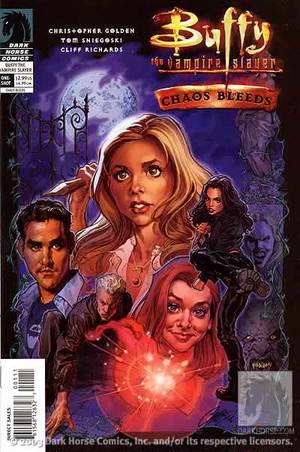 My dad gave me a 2nd printing of the issue in which Doomsday and Superman kill each other in the Death of Superman arc. The imagery always stuck with me, and the sense of tragedy inspired me to dive into Superman’s character from an early age.

Batman: The Killing Joke. I had seen movies and animated shows my whole childhood and by the time I actually got into the comic books I knew much of the lore and plot lines, and wanted start on a classic.

I have no idea, probably an X-Men comic, but I read quite a few of John Byrne’s Fantastic Four comics as a kid.

Fantastic Four #174. I was a little kid and my dad told me I could get a comic. I decided 4 heroes were better than 1, so I picked Fantastic Four.

It was a DC Digest from 1979. It had the reprinted Silver Age Superman-Batman crossover (the one on the cruise ship).

The Spectre or Groo the Wanderer

I had sporadic Batman issues as a really young kid. The first one I bought and kept good was GI Joe # 21 and I would get it each month. Then Justice League #1 from 1986 and Batman #408.

My first comic was supergirl