Y’know I’ve noticed something, screenwriters seem to really hate Two-Face! Comic authors give him plenty of care, but almost everywhere else he gets shafted! TAS was obviously his breakout appearance, but then he was absent from The Batman 2004 due to the Nolan movies, he was only in two episodes of Brave & the Bold, he was barely in Beware the Batman, in Batman Forever and The Dark Knight he plays second fiddle to the Riddler and Joker respectively, Gotham only featured Harvey Dent, (though that’s a decision I agree with) and in the Arkham games he’s completely under utilized! Why does Two-Face always have to be the second villain in the movi-…Oh… I get it… Anyways, my favorite is definitely the TAS version, but I also give a shout-out to William Shatner’s version for being the main villain for once… Am I alone in this line of thinking? 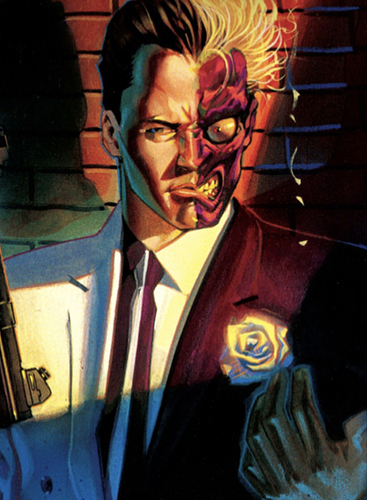 He is the main villain in Lego Batman: Family Matters. I highly recommend it for Two-Face fans.

Nah you’re definitely right, Two-Face does get the shaft more than he deserves. I feel like a part of that just comes from the fact that he has a really obnoxious gimmick. Just look at “A Lonely Place of Dying” for example. Two-Face is the primary antagonist, but everything he does feels way too silly and campy for a post-Crisis Batman comic. Ultimately, I feel like the best Two-Face stories are the ones that are short, sweet, and to the point, which is why you really can’t put him into a feature-length movie as the sole antagonist. The Two-Face segment in “Dark Knight Returns” is fantastic, as is “Two of a Kind”, which appeared in an issue of Batman Black and White. Even when you look at “The Long Halloween” or “Dark Victory”, the Two-Face parts feel awesome because they are pretty condensed in comparison to the rest of the story.

I’ve actually seen that, and yet I still somehow forgot. I’m definitely rewatching that.

Sadly he is not in Gotham show right

It is a bummer, but at the same time, Two-Face’s origin story is best told when it’s intertwined with Batman.

Two-Face is the primary antagonist, but everything he does feels way too silly and campy for a post-Crisis Batman comic.

It really wasn’t until a year later in Batman Annual 14 that the character really became more serious and less gimmicky. And even then, it took a little longer for the modern version to stick.

Thanks, I’ll be sure to check that out!

It does appear in Two Face: A Celebration of 75 Years. And considering how much it “inspired” The Long Halloween, it really should get more love.

It’s kind of a tossup between Arkhamverse and Dark Knight for me. Arkhamverse Two-Face was my proper introduction to the character, and he’s one of several characters whose comic dialogue I read in my head w/ Troy Baker’s voice. On the other hand, while I didn’t fully take in The Dark Knight when I first saw it, further rewatches have proven the dramatic effectiveness of Aaron Eckhart’s amazing performance, which really left a mark that no other adaptation has. I guess I’d pick Arkham Harvey as my definitive version of the character, but DK Harvey is still the most compelling

I think both of them are absolutely fantastic, but neither of them get enough attention.

You’re certainly right about that, though I certainly understand why considering they were both overshadowed by 2 of the best Jokers ever

Yeah, if you ask me, it’s the greatest Two-Face story ever told. It’s up there with the Killing Joke and Pain and Prejudice for villain stories in my opinion. It definitely deserves to be added to here so it gets the recognition it deserves.

The Arkham’s ones were fun but I really liked him in the Rebirth All Star Batman. That was a nice take on the duality.