What Would Happen if the Trinity Died?

DISCLAIMER
This is not the first time this idea has been explored. There was the 52 series which put up the scenario what would happen if the trinity basically died for a year, there was also the Death of Superman, Battle of the Cowl, and so on. But I thought it would still be interesting to think about what would happen if the Trinity died and didn’t come back.

Obviously DC would NEVER do this and these are comic book characters so they can’t exactly die unless someone wants them to. But for this scenario to occur we will have to follow these rules:

So What Would Happen?

I think the first thing that would happen is that all three would have a huge memorial inviting everyone all over the work to remember the times the Trinity were alive.

Second, the Amazons would have a burning boat ceremony after the Vikings as they would sail Diana’s belongings or corpse if there is one in a boat down a river or something and then fire flaming arrows in the traditional Viking way when heroes die in combat. They would most likely also attend the funeral as an army.

The heroes would most definitely get a militaristic funeral with the 21 gun salute and all. Especially with everything they’ve done it would only make sense.

More personally, there would most likely be people stepping up to take their place. Dick Grayson would most likely assume the role of Batman much like he’s done whenever Batman is missing. He’s the most convincing and experienced of them all.

Donna Troy would most likely assume the role as Wonder Woman like she did when Diana wen MIA after Crisis.

As for Superman either Connor Kent or Jon Kent would most likely take his place at least as Clark Kent.

In doing so there would probably an act of Bruce Wayne and Clark Kent also dying in order to keep the identities in tact while also sending them off so the world knows they are gone for good.

Crime rate would probably also increase with the news the three strongest heroes are now out of the picture, but obviously there would be heroes to stop them all.

And if Dick were to move to Gotham in order to take Batman’s place, one of the other vigilantes such as Huntress or Black Canary would probably move to Blüdhaven to cover crime there.

But those are just my own theories. What do you think would happen if the Trinity were to die? 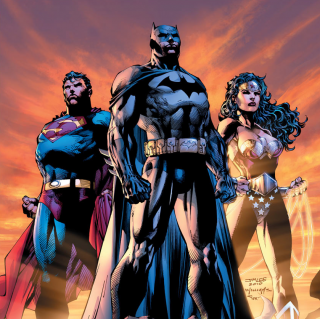 You might want to try the New52’s version of Earth 2 (2012) and Earth 2: Society, both available in the comics section right now!

Wally West would get the blame.

@Super-Squirrel - I came to say this. I actually really like N52’s Earth2 stuff. Especially The Flash and Power Girl & Huntress.

What happens every time, someone or some new group of people will rise up in their stead.

Then I guess Conner, Tim, and Cassandra would step up. At least that’s what I would love to see.

Comic book and merchandise sales would plummet.
The earth will still revolve around the sun.
And the world would be worse off.
(While I grant you they to often get shoved down the collective throats to much)
All three are iconic and timeless for a reason.
You couldn’t remove those three from the DCU any more than you could remove “the father, the son, & the holy ghost ” from Christianity.

As Hawking once said, “it’s like asking someone who studies the earth, what’s one mile north of the North Pole. It’s an interesting question, just not relevant.”

52 wasn’t about the Trinity dying, it was about them taking a break from the superhuman community for a year and other characters stepping up to fill the temporary void.

If the Trinity did die and for good, another would come along: Jon (or Connor) would be the new Superman, Dick would again be Batman and Donna Troy would again be Wonder Woman.

Merchandisers could now produce product of The New Trinity as well as the Classic Trinity, which is always evergreen.

If they killed these characters off along with the flash, the Terrifics, and the injustice universe permanently I would give up DC and become a full on Marvel fan. But if they just disband the trinity or temporarily kill off these characters I’d stick around.

DC would lose a lot of it’s fan base.

“The Trinity is forever.”

Then I would lol.

I feel like, if the real Batman died, Joker would be done. If he didn’t kill him, he would never be satisfied and live in misery the rest of his life.

Im not sold on Dick Grayson being Batman. I think the whole point of Dick becoming Nightwing is to separate himself from Bats and come into his own. I much prefer to see Dick as Nightwing than as Batman.

I think out of all the Robins Tim Drake makes the most sense to take the mantle. Damian, though its enjoyable, he is too crazy to be a good Batman imo. Jason Todd is obvious why he cant take the mantle.

What should happen:
The Justice League would evolve to something similar to Justice League Unlimited. The safety of the Earth and the Universe at large is ultimately to important to be left to a handful of people, and the vast resorces of the Justice League would be better served if in the hands of more heroes working together with effective resorce deployment and sharing of information.

if I recall the Earth 2 Title was exactly about the Trinity being killed off and the aftermath of it.