Which Batman Villain NEEDS to be in Batman 2021? explain? 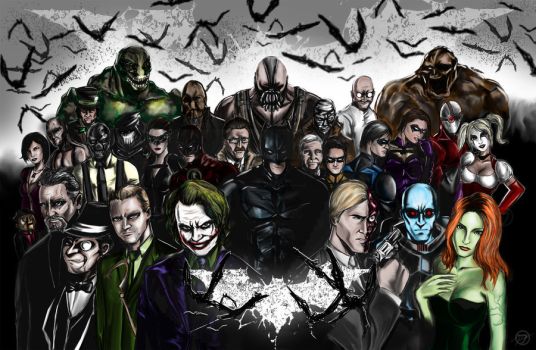 I want a major villain like Bane or Hush to be a red herring to Kite-man.

Villains that haven’t been in a movie before is a good start.

The court of owls or Hush

The Court of Owls would be great.

@Vroom, yes that would be terrific.
I would love if they did a Court of Owls animated or live action show or movie set around there origins and Gothams. A tale through the ages kind of thing, with their rise to power focusing on different hurdles they face leading up to Batmans appearance in Gotham. Showing different missions of Talons and there history.

First, Catwoman. Why? Because if this is the start of a new Batman continuity then let’s bring the love if his life in already. She should be a recurring character. We can see her go from theif and villian, to anti hero, to ally without forcing it in one film. They can play out their “cat-and-bat” courtship throughout a series.
Second, Penguin. Despite the perception that he is over-used, he has only been in one film and it was very untraditional. It’s safe to say that a strong portion of film goers didnt watch Gotham and WB shouldnt assume that the audience as a whole has Batman Returns as close to their chest as the fandom. It was decades ago. His character can be an arms dealer, an informant, a nightclub owner, a madia boss. He doesnt have to be the main baddie, a mystery needs multiple suspects afterall.
Riddle me this? If this is a detective story, who makes more sense than Riddler? Answer: Nobody. Batman: Hush is a great example of how to use Riddler.

An edit button will be a blessing

I just want a horror movie set in Arkham with Batman trapped inside. Imagine a Horror based Batman movie with Scarecrow as the main villain. Throw in Mad Hatter, The Riddler, Joker some lower tier baddies like Tweedledee and Tweedledum, The Ventriloquist and you got yourself a Batman movie I wanna see. But the detective/noir route Reeves is talking about sounds great too.

I’d love to see him face someone he can go all out on without the danger of killing them, like Clayface, Bane (but with a mixture of the look of Batman & Robin’s Bane and the organization skills of the Bane from the beginning of DKR), Man-Bat, Solomon Grundy, maybe even Hugo Strange with a bunch of robots… It’s a comic book movie, there can be robots!

I heard that there were going to be something like 6 villains, and that it’s a detective story. Now most would say to that that the Riddler should be in it, but I’m kind of secretly hoping they pull from Batman: Eternal and have Cluemaster in there.

The common rumors are that the main villains will be Riddler, Penguin and Catwoman, which I really like – Reeves has talked about exploring more of Batman’s cerebral side as well as his more vulnerable side, so seeing him tackle characters he has to outthink more than outfight makes that work; and who better to really show that tender side than the sometimes adversary who is ultimately the love of his life?

Wrong, it’s been rumored to be Ambush Bug. Dwanye Johnson being the bug.

The Riddler and Black Mask would be the two lead villains of the alleged six I’d want to see.