Who is your favorite Robin?

AND/OR sell me on your favorite Robin. I’m inbetween at the moment. I’ve always been Grayson (classic hero) but recently Drake has been growing on me. And I like the Todd in Titans and his story in general. I don’t think I’ll ever like Damian.

I’m roughly with you. Most of Dick’s character development has been in his Nightwing years, while Tim had a very long series with entire character arcs, supporting cast members, and rogues all to himself, so I feel like he’s the most fleshed-out Robin for his tenure as Robin. I like Dick better as a character more generally, though.

Jason had potential in theory, but no really good stories before he died. Under the Hood is a cool comeback, but personally, he’s gotten steadily more grating since then.

I feel confident in saying I’m the most vocal Damian-hater on these forums, so I’ve pretty much said everything I have to say about him.

And then, of course, there’s Stephanie. I’d actually file her into Jason’s “There was legitimately some potential here, why’d you screw it up like that?” bin.

Jason Todd is my favorite (and I disagree on the point that he had no good stories in the 1980s–he was particularly good in Mike Barr’s Detective Comics run), but Dick Grayson is still the best one. He was not only a good character in his own right, but he helped shape who Batman is.

Dick is the only one with a real dynamic (tee-hee) contrast to Batman isn’t he? The others are just soldiers, some of whom end up hating Batman, but they aren’t too different from him generally.

Truthfully you can’t not like Dick. He’s such an individual with so many storyline possibilities it’s literally impossible for him not to b a favorite

. At the same time, I don’t have much of a reasoning but I really like Damian. Part of it is his origin but it’s also because he’s so great with any character. Like you put him in a room with Flash or GL and he’ll manage to make it a really funny scene without even trying or meaning to.

@AlexanderKnox: Huh. I really couldn’t get into Barr’s run. The writing felt very stilted, and Jason didn’t really come across as materially different from Dick in personality (admittedly partially because his new origin hadn’t been implemented for most of the run). If anything there were some decent stories in Max Allan Collins’ Batman run, but after the origin and maybe the issue or two afterwards, there’s nothing particularly notable.

@DGWJTWTDW: Not sure what you mean by “just soldiers,” nor do I think any of the other Robins are all that similar to Batman, at least not moreso than Dick. Jason was different originally for his rougher, more streetwise perspective and, after he came back, for being a homicidal maniac. Tim had an edgelord phase after Infinite Crisis where he was kind of Batman’s own personal mini-me, but for most of his run he was grounded and thoughtful in a way that most of the others weren’t and made him kind of an anchor for Batman’s more human side. And Damian is a showboating, self-aggrandizing brat with delusions of entitlement, which are traits one can possibly ascribe to Batman when he’s being really poorly written (or in parodic takes like the Lego Batman Movie), but not most of the time.

@Jill: I’ll never comprehend what people find funny or endearing about Damian. His entire character is being as intolerable as possible to everyone, all the time.

Sorry to drop more Damian rants on everybody. I really do try to rein them in.

The best way the bat family can ever be is dick and nightwing, Jason as red hood, and tim as Robin, no Damian

Hands down, I am going to have to say Dick Greyson.

Ok so DC look I got a idea and anyone reading this please draw attention to this and share if you agree cuz its something that I feel would be really cool and helpful to certain people . So I’m a huge fan of the all the animation movies like batman vs Robin titans vs justice league and all that but wouldn’t it be cool if we did a batman movie focused on the bat family ? And yes I know there’s bad blood but that’s not what I’m talking about what I mean is a movie focused on the CORE members such as Bruce, alfred, dick, Jason , Tim Barbra and damien these are all batmans CORE members/partners/family and the reason I think this is a good idea and needs to happen is because seeing these characters as a family is something that we dont see much. Yes we see dick and damien or dick and batman together but we never see all of them together in the same room and how they like or dislike each other we see it in comics ya but in movies never I think it would be very interesting and important to see damien interact with Barbra or Red hood or Bruce and Barbra also to see how much Jason cares about his fellow brothers and sisters it would also be very heart touching to see alfred talk about all of them same with Bruce and how much they love them just give it a thought DC I think this would be good for alot of people it would also EXPLAIN THE TIME LENGTH BETWEEN EACH PARTNER cuz dam I’m curious lol I no the order they go in it’s just after Jason how long was it till Tim and them damien also when the hell did Barbra come in to the picture we need this #batfammovie

@Donte531 Yes I agree full heartedly. I feel (perhaps wrongly) starved for Batfamily content
@Batjamags I’ll give you that Damian’s entitlement is something that isn’t a part of Bruce. But while Todd and Drake are their own characters, it’s kind of hard not to see DC going “Batman’s smart, so let’s give him a smart sidekick” and “Batman’s known for being scary-ish/angry-ish so let’s give him Todd” you know? Grayson is upbeat though, which Batman definitely isn’t. He was originally added for contrast/

@BatJ hahah I get you. I don’t know why he doesn’t annoy me tbh, I just think his personality is really funny

Tim Drake. Chuck Dixon’s writing for him in Detective Comics, Robin, and the 3 Robin mini-series is excellent in my book.

@BatJamags I think we’ll have to agree to disagree on this one. The Max Allan Collins stories with Jason are perfectly serviceable, but I find them weaker than the pre-Crisis Todd stories from Doug Moench and the post-Crisis stories by Mike Barr and Jim Starlin. One of the big problems I have with stories after A Death in the Family is that they often try to suggest that Jason was always angsty and rebellious. I find it far more interesting that he initially seems like he’ll turn out just like Dick, but then he becomes more unstable once he reaches later adolescence. (To its credit, the animated film Under the Red Hood did a good job at depicting this arc in the character.) 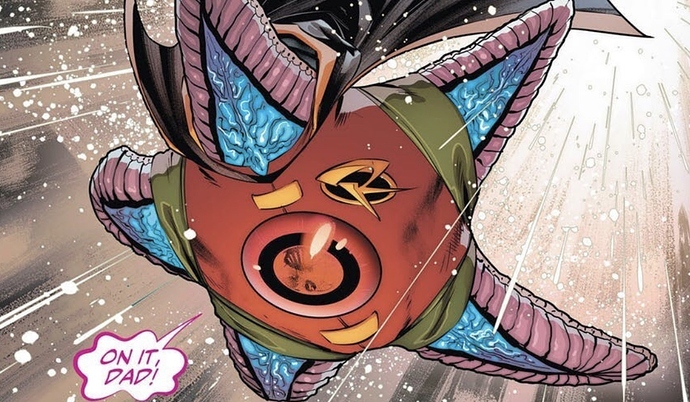 Dick Grayson and Tim Drake are my favorite characters to bear the mantle of Robin, but they’re also the two who had the most time and development in the role, so that’s hardly surprising. I feel like using Superboy-Prime punching reality as an excuse to randomly resurrect Jason Todd was a mistake, particularly since they haven’t seemed to have a coherent plan for using him. I loathe Damian. Then, there are the outliers, like Carrie Kelly (I don’t care for the Dark Knight Returns), Stephanie Brown (who I like, and who could have worked if they’d actually intended her run as anything other than “kill off a Robin, but not Tim”), that android from the 853rd century, and some others I’m probably forgetting.