Who Should Superman's New Creative Team Be?

When Brian Bendis brings his run to a close, which writer and which artist would you like to see be given a chance plotting the course for the Man of Steel?

Ideally I’d like to see Jurgens come back as his Action Comics run before Bendis was outstanding. But if we’re going for something different id like to see two people who can carry a monthly book on time but with good writing and good art:

While in no rush to see the current team leave the book, when they do eventually conclude their run, some options I would enjoy seeing (no particular order)

I would love to see Lee Bermejo do a Superman book, but not I’m not sure if he’s ever done regular monthly comics. Would also be great to see Jim Lee return to drawing interiors, but he probably doesn’t have the time for that given his responsibilities.

I would give Tom King one book and Mark Waid the other. Any artists they want, but I’d be over the moon to see them given long runs writing Superman.

After watching the Visionaries episode of DC Daily about Jorge Jimenez, and seeing how much passion he has for the character, I would be excited both for him and for the book to see him get a run on a Superman title.

I’ll be honest, I don’t really follow many comic writers or artists. I know some of the big names, but outside of that I’m completely lost. I am, however, super familiar with screenwriters. I like comics. I LOVE movies. So I figured I’d list some of my favorite screenwriters that I think would be interesting. Most of them I chose because I like their writing and I thought they’d bring something completely new and different to the comic world/Superman. However, I don’t think any of them would ever happen in a million years.

1.) Aaron Sorkin: Easily one of the greatest screenwriters of all time. Despite being known for more grounded drama like The Social Network and The West Wing, I think Sorkin could really bring something new to the character. He is someone who is really able to analyze, digest, and deeply understand people. He puts into the time to perfectly find the voice and mindset of any character, which is why I think I’d like to see his take on Superman. I’d love to see the way he grounds the character a bit and really analyzes what Superman is all about. His dialogue is impeccable, and I think that’s obviously something that’s super important for comics.

2.) Bo Burnham: Bo’s mostly known for his stand-up comedy work and viral internet fame from the early days of YouTube, but he excellently proved himself as a screenwriter with his debut film Eighth Grade from a couple years ago. I love Bo’s style of comedy and outlook on the world. He calls it like he sees it. He’s unafraid to call out the worst aspects of entertainment and is very much against big name brands and properties it seems like. This is exactly why I’d love to see him take on someone like Superman. What would someone who is completely against the grain and against big properties do with a big property. It probably won’t be very fan-pleasing, but boy would it be a pretty crazy and interesting ride.

3.) Greta Gerwig: She’s taken on a lot of popularity and success after her recent films Lady Bird and Little Women. Both are incredible films in my opinion and I think she’s another writer who is just phenomenal at writing believable dialogue and characters. I think she would probably take Clark back to his small town roots and have him do a lot of reflecting on what he’s become and his impact on the world (something I’d love to see). I also think a female perspective as a writer on Superman has been pretty underutilized and interesting.

4.) Barry Jenkins: He wrote the critically praised films Moonlight and If Beale Street Could Talk. Two films that are about as far away from the concept of Superman as you could get. Which is EXACTLY why I want him. I just have no clue how he’d handle the character and world of superheros, but one thing I’m certain of is that he’d really be able to bring in some real and grounded issues which should be discussed more in comics.

5.) Martin Scorsese: That’s right… THE ENEMY OF SUPERHEROES!!! Except… y’know… he’s not haha. He produced Joker. I’d like to see his take on heroes. Maybe see the way he would fix the problems he called out. Just another unique perspective that I think would come at the character and comic format differently.

That’s all I’ve got for now, but I might come back and add to this as I think of more writers. Once again, I know none of these will never happen, but I think they’re still cool talking points and ideas. As far as artists, I’d just like something super stylized. Comic art is pretty standardized (which is good for the overall success and accessibility of the medium), but I just like some more flavor in my art lol.

I really enjoyed @OmniLad’s out of the box ideas.

I would love to see Gail Simone get a shot. I think she would be great bringing humanity to Clark and Superman along with a good balance of each character.

Robert Venditti has been writing a great Superman on the Man of Tomorrow digital releases. Glen Melnikov’s art is pretty fantastic as well. Definitely a future star. 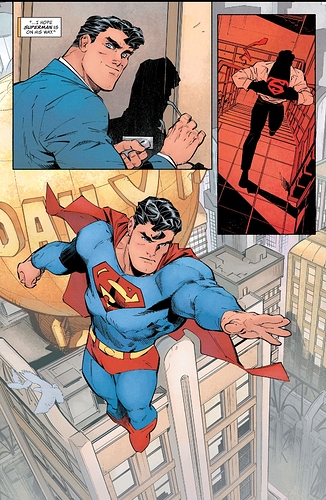