Who Would Win? Alfred Pennyworth vs. Jim Gordon

I’m not voting…this is too hard. I’m going back to reading comics.

This is a valid point

Had to go with Alfred. It is a really tough call though…

Wanted to pick Alfred but he’s mainly been behind the scenes where Gordon made his career in the ruthless, gritty streets of Gotham facing punk and super-villain alike. In my book grit gives him that extra edge. But don’t get me wrong neither man would be the same after. 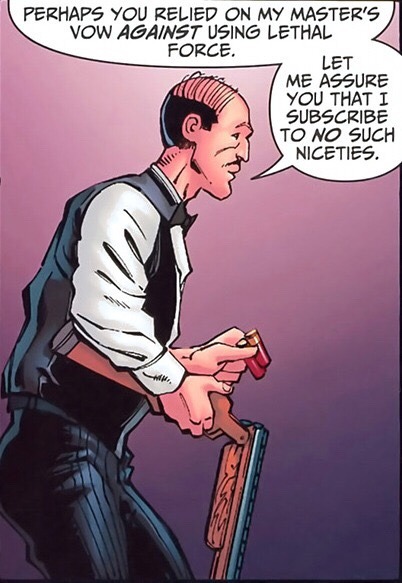 Alfred is an ex-spy and was kicking booty long before Batman was around. Add that to his watching the Batfamily practice over and over again, I’ll give him the edge.

But definitely a tough call.

Yeah Alfred was an agent at one point and was kick ass in Gotham show.I choose Alfred, but I can’t forget that Gordon had been through alot of $#!+ with Batman which also makes him a great contender.

Facts that not everyone knows. Gordon was a US Marine before becoming a cop sand walked a beat in Chicago for a short time. But Alfred was former SAS before a short stint as a spy. Plus as Bruce studied various fighting styles Alfred had to have picked up a few things. In a toe to toe fight with all things being even I would say Alfred would come out on top.

I gotta say Alfie on this one! He’s got more swag than Gordo!

After watching season 1 of Pennyworth I have to go with Alfred.

Anyone who can keep the dark, dank Batcave clean and functional, assist “the world’s greatest detective” in his unending war on crime, and can play den mother to a dysfunctional chiropteran family, gets my vote on taking down the Commish.

Folks want to talk about Gordon’s military training and working as a beat cop. Especially as a beat cop there is a certain set of rhythms and hierarchy to street crime. By contrast, as SAS, Alfred was in the worst parts of different places on the planet, and those all can have different rhythms and structures. Not to mention that there have been plenty of bat adventures that take place outside of Gotham.

Also, be it Batman or all the various members of the bat family, Bruce can’t be the only one training or sparring with them. Who does that leave, Alfred. Why? Because he’s qualified. The fact that we don’t see Alfred cower in fear, but, not only stand his ground but step up to the challenge when they are presented.

There is the idea that has been raised that maybe Joker knows who Batman is. If so, he knows about Alfred, and probably even more so than Jim and Babs. He famously tried to break Gordon, in the killing joke, and a couple of other times over the years. If he knows who Batman is, there has got to be a reason why he’s never targeted Alfred. I am of the opinion that he doesn’t target Alfred because he knows Alfred will kick his butt if not straight up kill him. Alfred don’t play by Bruce’s rules.

Oh on Gordon’s defense yes Alfred was SAS, but people forget or don’t realize that your life is on the line every day your a cop just like the cops in Chicago. So ponder that for a while hahahah.

Why the fight in the first place?

I’m assuming that we’re talking about the versions of these characters from the late Bronze Age onward. A fight between their Golden/Silver Age versions would be an embarrassing affair that only the most deranged of fans (myself included) would ever want to see. It’s like wanting to witness a fight between Pat Hingle and Michael Gough.

My boi Alfred can take Superman so I’m pretty sure he could take Gordon any day.