Who Would Win? Alfred Pennyworth vs. Jim Gordon

Ok im gonna post my reasoning. alfred was in the british military, he was a trained boxer, also in INJUSTICE MY MAN Held HIS OWN AGAINST SUPERMAN!

INJUSTICE MY MAN Held HIS OWN AGAINST SUPERMAN!

How did I forget this?? Hmm, this does seem to sway things in Alfred’s direction, but there are some REALLY good points about Gordon’s military history too.

Alfred. Besides all the previous mentioned stuff he was kicking League of Assassin butt in Resurrection of Ra’s al Ghul.

Though I am a fan of Gordon more overall I just don’t see him winning this.

I honestly don’t know how to answer this but if Jim Gordon was Batman I’m not really sure.But deep in my heart I feel like it would be Alfred pennyworth…

@BestBeastBoy thank you for your work and contributions to This experience For us all! Best of luck with the new adventures!

Not sure had seen applejack post something of a Farewell

Alfred for sure, he beat Superman to a pulp then hit him with a, “I’m not angry just disappointed” 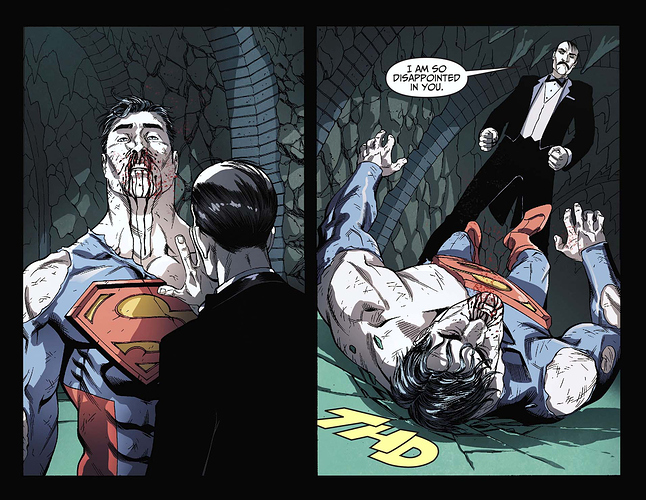 You forgot that Alfred is the only one batman allows to use a gun. Shotgun his prefer choice. And there the armory.

This was hard. Ultimately, Alfred has MI-5 training.

Basically, I think surprise is on Alfred’s side in this scenario, and they’re well-matched enough to make that a deciding factor. The only thing Gordon has on Alfred is youth, so I think the only way for Gordon to win is to outlast Alfred’s limited stamina, but I think surprise is more important, because stamina in an extended battle isn’t important if you can take your opponent down quickly instead.

Tough choice but I give Alfred the ever so slight edge! Former SAS and spy, plus ya gotta think that over the years he’s trained with Bruce so, that’s why he gets the edge over Gordon!

This is almost a no-brainer, Gordon was Batman… true, but a batman without Alfred… who is the only one who can withstand the bat scowl and even put the bat on its place? Its Alfred!, the same guy that has access, even design some and maintain all the bat tech. Alfred is as cunning as Batman, and does not need a bat suit to be bad ass.
Alfred would win. but he is wise and so is Gordon. a fight that would never happen…

Jim Gordon does have the better mustache, so by Sam Elliott rules…