Who Would Win? Flash vs. Flash

Wally… not only is he faster, I’d argue that he also has the experience. He started younger, grew with great teachers, and accomplished tasks no one thought possible (out ran existance/death pretty much to get Linda back). Current Wally has the memories of his pre-flashpoint self, so he’s not just a youngin’ compared to Barry. He’s also sitting on the Mobius Chair and Manhattan powered or whatnot. With the way he seems to be adjusting history, timelines, and potentially universes, he likely could just poof Barry out of existence or something.

As for the poster, I did think that some of the choices were odd. I didn’t expect Cheetah to be ranked so high, but I haven’t really seen the extent of her speed either. Juiced up in Bloodlines, she was a blur to WW though. As for Wallace, he’s the least experienced Flash, so I wouldn’t expect him (or any of the others who popped up around then) to compare to the other speedsters. Impulse was the only one I remember being ridiculously fast super young (not an expert there though). Bart didn’t make the cut though. I think the list was focusing on current characters (no Jay, Max, Jesse, Bart, Johnny, Fox, tornado twins, XS, Savitar, other reverse flash, Zoom, etc.), or as pointed out above many cosmic heroes. For example, Lanterns zoom all over space, and Hal was able to keep up with the speedy New God (also missing), who was outpacing omega beams. Also, WW and Shazam appear, but not Hermes/Mercury.

Personally, I think the list should have just contained speedsters to keep it simple. Premise: speed focused characters are faster than others. Then, aliens, Lanterns, and mythical/magical beings can be grouped as general families that follow the speedsters.

Edit: Although, now I want to know who the fastest super-fam member is… oh, let’s be honest; it’s Krypto.

I think Barry is more clever with his powers and thinks faster than Wally. Plus…my heart won’t let Barry fail in my mind​

Although, now I want to know who the fastest super-fam member is… oh, let’s be honest; it’s Krypto.

Well, technically he won the race, but for the record - Streaky files a protest. 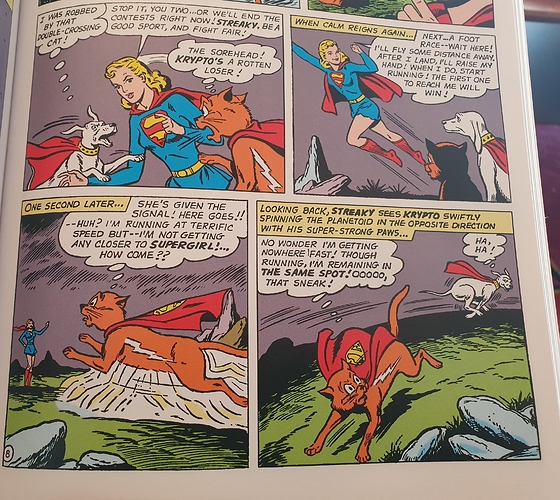 Shazam has the speed of mercury.

Yep, so he should be at least as fast as Shazam.

Ooooooooh when I voted it was exactly 50/50… we’ll see if that changes.

Although I think it would be a very close match, I’d have to go with Wally. Barry may be smarter and may have more experience, but Wally is definitely faster and more in tune with the speed force. Plus if we are working with current Wally, he has the mobius chair so I’m sure that works in his favor.

I would have to go with Barry. I think Barry would be more clever in using his powers to his advantage.

It’s Wally that is the CLEAR WINNER! …not only is it written clearly time and again in the comics how Wally has surpassed Barry but any poll you would look up on Sidekicks that surpassed mentors he’s always in the top 3 being said obviously focus shifted when BA returned to comics mainly because Wally’s last couple years as a solo act suffered so HORRIFICALLY from bad writing and so they thought maybe Bart Allen would work and that INSTANTLY FAILED! When the plans to bring Barry back were set in motion. Soooo BAD WRITING is the only reason it’s questionable WALLY was not Kyle Rayner! (Though I like his character) and he made ALL the strides in surpassing his Mentor Proper!

Expanding on that,… it was one of the more Honest/Legitimate “passing of torch” in comics History! just undone by Geoff Johns! … who I normally agree with his love for Silver/golden age! Think it SHAMED nearly 25+ To 30 years of Wally’s Run

You got a good point there

Thanks @galacticpeng6uinz.85777 thing is Wally got the “Kyle Treatment” after (Flash Rebirth) then written out of continuity, and Replaced! Just glad at least now he has been Front/Center and A Focal Point of a bunch of stories since! Even w/out his OWN title that at least serves him more Justice!

But now I’ve gone back to the new 52s and started reading – I only had the stuffy 60s Barry Allen scientist to reference before.

It’s closer for me now but still a Wally West fan .

If we’re talking Barry at his peak vs. Wally at his peak, then I choose Wally. Now, when Barry was “dead” and Wally topped out at the sound barrier… that would’ve been a different story.

While Wally might be faster, Barry has the experience factor on his side. Although, Barry might choose not to fight and let Wally win just to avoid the confrontation. That leads to the question, who really won? Barry for doing the right thing…

Barry Allen, Wally West is always going to be less good than Barry as he is really just a younger and slower version than Barry.

Both have been faster than the other at some point, but I think it boils down to the trust that Wally has in the speed force. For better or worse Barry is first and foremost a scientist and I feel like that hinders his faith ever so slightly compared to Wally. Just my opinion so don’t roast me

Thought it was proven fact that Wally was faster

wally is the best flash