Who's your favorite Robin?

Who’s your favorite Robin, or who do you think was the best at their role? I honestly am not sure because each one brings their own strengths and weaknesses to the role.

Dick Grayson- First Robin and had been trained as an acrobat since childhood. Like Bruce, he was able to channel the anger from his parent’s murder to fighting crime and went on to grow out of the sidekick role into his own superhero as Nightwing.

Jason Todd- Freaking off the wall lol. Was actually bold enough to try to steal the Batmobile’s wheels. He gets a lot of animosity from the DC community I know, but I think he’s pretty misunderstood, especially considering how he suffered at the hands of the Joker.

Tim Drake- I think he’s the whole package and he’s got what it takes to actually assume the role of his mentor when the time comes. Level-headed, skilled fighter, and possesses incredible detective skills, that can possibly outmatch Bruce’s. I honestly cannot find any flaws in this Robin.

Damian Wayne- Well, he’s an actual blood descendant of Batman. His demeanor is similar to Jason’s but it’s crazy because he’s so young. He’s probably the most skilled fighter out of all the Robin’s and is basically a trained child assassin. If I was being held hostage, this is probably the Robin I would most want to come help. Hopefully, he can mature and become more level-headed as he continues in his role.

So long story short, they all have their ups and downs, so what do you guys think and who would you prefer be on Batman’s side in battle? 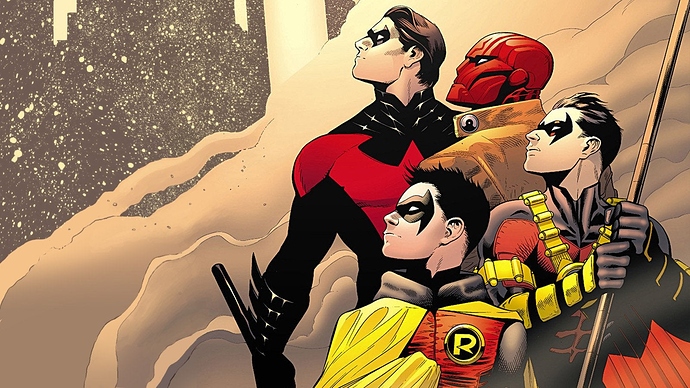 Tim Drake. In my opinion he was written with the most heart and humanity. He was also very humble and centered as Robin. He might not have been as physically gifted as Dick, or intelligent and as well trained as Damien, and as street smart as Jason. But he possessed a balance of the traits that define the other 3. He also is, by far, the best leader (sorry Dick). For definitive proof please read Geoff Johns Teen Titans run.

Tim Drake is my favorite! He’s the one I grew up with in the 90’s , so the character is near and dear to me! That being said, Dick Grayson is a LEGEND, but I really prefer him as Nightwing rather than Robin. Also, Damian Wayne has REALLY grown on me. I still like Tim more, but Damian cracks me up with all that snark lol.

DC should just go ahead and write Damien into one of Batmans arch villains (the heir to the demon) and have Tim retake the mantle of The Boy Wonder.

Tim is Robin again. He has been in the Teen Titans Giant and also is in the new Young Justice series.

Tim Drake. I came into collecting Batman Full-time just after the death of Jason Todd, so I really didn’t know him all that well. I only knew Dick Grayson as Robin from Batman '66 and the New Adventures of Batman from Filmation. (and of course the Super Friends.) Tim was helped by the fact that they gave his story a long build over the next two or three years, which allowed us to get invested in Tim and really root for him to earn the right to wear the suit.

Dick is one of my favorite characters (specifically, my 3rd favorite superhero after Batman and Captain America), but the reason for that is that I really like how he grew into Nightwing. Honestly, he was never all that interesting as Robin (at least outside of the animated Young Justice, but for fairness’ sake I assume we’re comparing the “main” comic versions).

Jason was kind of redundant Pre-Crisis, since he was just a carbon copy of Dick with red hair. Post-Crisis, he was actually pretty interesting, but got killed off before he could do anything or get any serious development. Ever since, he’s pretty much just The Robin Who Died. As Red Hood, he was a cool villain, but then they stopped using him as a villain and he just became a sort of “filler” Bat-Family member who’s a little bit of a jerk but everyone puts up with him and he never does anything important.

Tim is cool. He offered a more “human” perspective during an era where Batman was developing into the godlike angry genius ninja master planner we all know and love/hate/have-mixed-feelings-about. Especially before his family died, Tim was a lighter, more level-headed perspective for the family, but wasn’t mostly off doing his own thing the way Dick was. It also helps that Red Robin is a really lame name, has had two lame costumes and one that’s pretty much just Tim’s Robin costume again, and when he shows up as Red Robin, he’s pretty much just being Robin, but older. In other words, while Dick being Nightwing and Jason being Red Hood are kind of cool, Tim being Red Robin is mostly pointless.

Stephanie… doesn’t really count, honestly. Her stint as Robin was extremely brief and a total mess. Still, I feel obligated to at least mention her.

Damian has a lot of issues. He first appeared basically saying he was entitled to be Robin because he was Batman’s biological kid. And… apparently the writers agreed, because he did get to be Robin. Even though he was still a brat, and has killed people. About a decade later, he’s… still a brat. And still has killed people. He’s still entitled, uncooperative, imperious, and gets to arbitrarily be better at things than other people to make him look more important. In short, all of Batman’s worst traits with none of the redeeming qualities. He’s got Helena Wayne’s gimmick (Batman’s kid, though not in the main universe… yet) with Cassandra Cain’s backstory (raised to be an assassin with ludicrous mad skills - also note that Cass was already Bruce’s adoptive daughter pre-Flashpoint), but with a really bad attitude.

It has to be Dick Grayson the first robin because I think he has the most upbeat personality and with his backstory it is amazing how happy he can be all the time.

Damian Wayne is my favorite. I just really dig the whole son of batman vibe and he is also the most badass one.

Damian pulled me into the robin character in general. Interesting character and his snarkyness is always being corrected being comedic most (not all) times. I got my first comic as super sons and his character and Jon are my favorite combo. Surprizing i know.

Easily Dick Grayson. But Tim is a close 2nd

Dick Grayson’s my fave. Tim Drake would be #2, then Jason Todd, then Damian Wayne, and last Stephanie Brown. I like all these characters, that’s just the order they are in for me right now. Stephanie is still a close second for favorite Batgirl, though.

I agree, Tim Drake. To me he is the most like Batman in the way he thinks.

Timothy. Because Dick is better as the grown up Robin Nightwing.