Sure, and I think it’s fair to say he was probably purposefully written with little flaw because of fan expectation. After all, in their eyes, they thought that the last time they tried to write a Robin with flaws, the fans voted to kill him off.

If you haven’t already, I’d really recommend that you check out 3 of the stories I linked above before we move to the miniseries: Deja Vu, Rite of Passage, and Identity Crisis. They do a lot to round Tim out.

And no, this isn’t just self-promotion.

This threw me until I realized it was an earlier story by the same title. The one I was thinking of did just the opposite of rounding Tim out.

Yeah, this is the three-parter where Tim officially gets the job, not the miniseries where he begins his grimdark descent.

Is it odd that I kind of like him better during his more grimdark moments? Like, reading this story kind of solidified to me what I think makes him compelling under the pen of creators like James Tynion.

Basically, what you get with Tim’s motivation at the most macro level is that he’s someone who wants to fix things that are broken. He sees what’s going on with Batman and knowing what he knows, he feels like he has to do something to fix it. I think that holds true for a lot of his actions, from trying to clone Conner, to him going renegade to try to find Bruce when everyone thought he was dead, and even stuff like the Belfrey and the crazy alternate dimension Tim responsible for the Titans Tomorrow universe.

Yeah, and those motivations are already seen in the earliest stories: 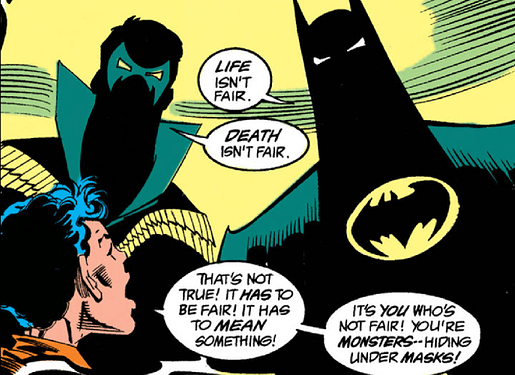 Neat – and by the way, I’ll probably go through that reading list you mentioned, thanks for the tip.