Yeah, some stuff came up yesterday and I forgot I had to get this put up, so, hope you enjoy my last-minute picks. I’m figuring that for my months on the club, I’ll alternate between themed oneshot selections like last time and a slow crawl through the Knightfall Saga, probably going on to some of the lesser-known crossovers if and when we get done with that.

Our selections for this week are:
Batman: Sword of Azrael #1-4
Batman: Vengeance of Bane #1 (NOT #2 - that was released significantly later as a sort of bookend to the whole affair)

SWORD OF AZRAEL
1: Have you read this book before? If so (or even if not), what do you think of it? Is it up to par with Denny O’Neil’s other work?

2: Are Azrael and the Order of St. Dumas a reasonable addition to Batman’s world, or do they feel out-of-place compared to his more typical “street-level” adventures?

3: Not a lot is revealed about Biis’ nature and goals. Do you like that, or does it hamper the story?

4: Pretend for a moment that you don’t know what this leads to (or maybe you actually don’t!). Is Azrael a compelling character? Does the story leave you interested to see more of him?

VENGEANCE OF BANE
1: What do you think of Bane as a character? Does he stand enough from the typical gritty, overwrought early-'90s characters?

2: Since we covered Batman: Venom not too long ago, do you like how this story follows up on plot threads established there?

I’m going to give you guys a bit of a time crunch on this one to get us back on schedule, so I will try to actually put the next one up at Midnight Eastern on Monday the 23rd. 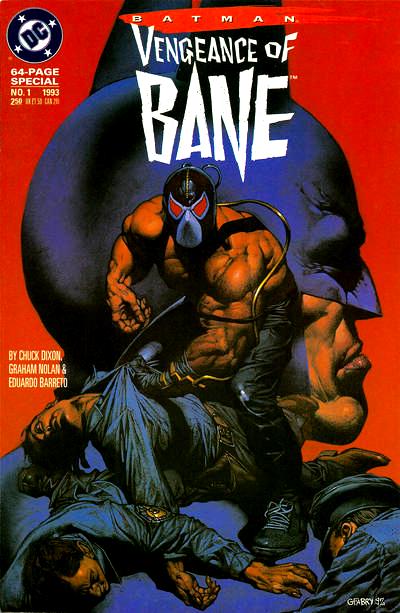 Heh, just as I finished last week, you posted this one! I have read Vengeance of Bane as part of the Knightfall trades a while back, but haven’t read Sword of Azrael, so looking forward to cracking into that.

Denny’s stories from around this time all seem to run together. Sword of Azrael was first pitched as a story in Legends of the Dark Knight, and it feels a whole lot like the LOTDK stories that O’Neil had recently written. We have an obsessive cultist as the villain (this time seeming like a send-up of Cable and the Punisher), just like in Shaman. We have Bruce and Alfred getting stranded in an unfamiliar locale after their aircraft is shot down, just like in Venom. (And even though Denny didn’t write Prey, it’s still notable that we get both a violent vigilante and a villain donning Batman’s costume here as we did there.) O’Neil would soon replicate much of the globetrotting stuff from this story in Knightquest: The Search.

In short, Sword of Azrael is just meh. The titular character has an arc that largely gets lost in the shuffle as the story turns its focus to Batman and LeHah (the latter of whom gets the best moment in the story when he starts doing a voiceover narration for the sake of the readers and gets called out for it). Azrael’s costume feels like a 90s-ized version of the Year Two Reaper design by Alan Davis, but it works well enough. Speaking of which, Joe Quesada’s art is probably the biggest selling point for the book. He gives us an early version of Spiky Shoulders Batman. He also seems to draw Bruce’s cold breath as if it were cigarette smoke, and when that’s combined wit hthe sunglasses, it really starts to evoke Matches Malone. If I seem to be rambling, it’s because there’s really not much to say about this book.

Vengeance of Bane, on the other hand, is superb. Knightfall may have been a big gimmick, but it’s a gimmick with a great villain, and this issue sets him up perfectly. It’s just too bad that Sword of Azrael drops the ball. The result is that Knightfall becomes kinda boring after Bane breaks Bruce. A fantastic bad guy gets taken down by a boring protagonist, all while Tim Drake shakes his finger in disapproval. Oh well. At least we have Vengeance of Bane and Broken Bat.

Here’s the real question: who here would eat a chocolate fajita?

I am almost finished with these! I will be joining in probably tomorrow. So far I am enjoying it.

“Have you read this book before? If so (or even if not), what do you think of it? Is it up to par with Denny O’Neil’s other work?”

It’s definitely not his strongest work in terms of plot, character, pacing, or anything. Quesada’s artwork really does all the heavy lifting of getting people to turn the page on this one.

“Are Azrael and the Order of St. Dumas a reasonable addition to Batman’s world, or do they feel out-of-place compared to his more typical ‘street-level’ adventures?”

I think it works pretty well. This was actually a bit of discussion in the WW book club last week when talking about whether Wonder Woman fits in crime stories, but I think all of the Trinity have it where they can be dropped in just about any kind of situation or genre, and they can still work; and I think among the Trinity, Batman is the one who’s been stretched the most and is thus the perfect example of it.

“Not a lot is revealed about Biis’ nature and goals. Do you like that, or does it hamper the story?”

I don’t think there’s anything inherently wrong with having a mysterious villain. The thing with those kind of characters is that there needs to be something compelling, and this…wasn’t, at all. Like, I don’t even get what Biis was, is he a devil figure in this St. Dumas cult? How does he relate to anything there? It’s just poorly explained.

“Pretend for a moment that you don’t know what this leads to (or maybe you actually don’t!). Is Azrael a compelling character? Does the story leave you interested to see more of him?”

Not really. I’ve liked Azrael in other books, moreso recently in stuff like James Tynion’s Detective Comics run (his bromance with Luke Fox is great), or in other media like the Arkham games or other continuities (so far Curse of the White Knight >>>>>> Knightfall in it’s entirety).

“What do you think of Bane as a character? Does he stand enough from the typical gritty, overwrought early-'90s characters?”

Similarly, I like Bane, but more from what is done with him later from creators like Gail Simone and Tom King.

It’s funny, when I read this for the first time in my Knightfall readthrough, seeing Bane’s origin I thought “…That’s it?” I always kind of assumed that Bane was far more established when he comes to Gotham, but making Bane’s first real action in the world the breaking of the Bat just feels…wrong to me. It’s like having a game where you go from the tutorial level and straight to the final boss and beat them in one go. He has NO EXPERIENCE in the kind of mind-games and war operations we see him do in Knightfall, it just doesn’t feel earned in any way whatsoever.

“Since we covered Batman: Venom not too long ago, do you like how this story follows up on plot threads established there?”

Kind of? I mean, if I remember right they were in Santa Frisca during Venom, but any characters from that time period couldn’t have shown up, and I don’t think we see anyone from this story there. It’s really just a name-drop of “venom” and that’s it.

Overall, I really enjoyed Sword of Azrael and very interested in that character, but Bane did not impress me at all. Hopefully I didn’t leave any questions out since I can’t copy and paste the questions on my tablet in the app.

@PrincessAmethyst: Venom is such a good storyline, I highly recommend it.

Also, from what I’ve seen, I’m pretty sure Biis is never mentioned again, thigh I suppose it’s possible it could happen in the Azrael title which I haven’t read any that wasn’t part of a crossover.

Looked up Biis and well it is a mess lol The character does appear later as a foil to Azrael. It makes me feel that they didn’t follow through on some parts of the character.

I especially liked issue 4 where Bruce was taunting, fighting, and outwitting his captor.

Overall I thought it was a great story and I enjoyed it!

VENGEANCE OF BANE
Bane’s backstory is so tragic that I can’t help but to have some compassion for him, even though he’s doing awful things. He was raised in a jail - constantly fighting for his life - so how would he know what peace and civility looks like? His character is menacing, but I respect Bane’s determination. I think he’s an excellent character. I liked the panel where he first heard of Batman and said “Batman?” 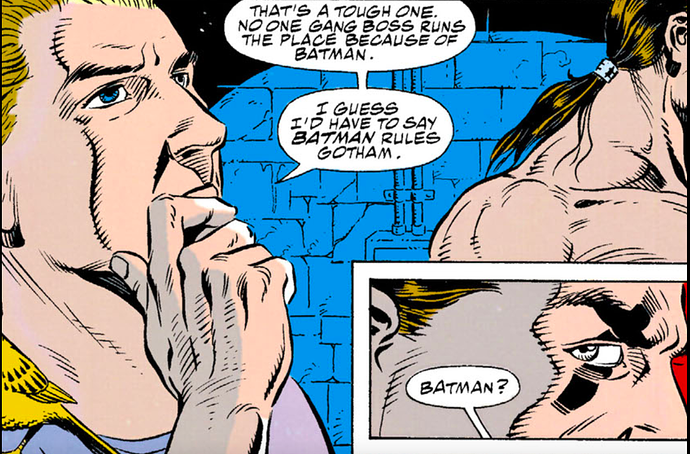 @JLWWSM – It’s funny, seeing it from your perspective made me wonder if maybe I’m being too harsh, going at this from the perspective of seeing where these characters go. I will say if you liked this, you should definitely read through the Knightfall saga to see where it goes next.

While Biis getting called out on the narration thing was funny, what made me laugh was when earlier Batman was doing the same thing to Alfred. Like, this is the same curt, gruff, emotionally stunted man who can barely say “I love you” to his foster children, and yet here is waxing poetic about how they survived a freaking helicopter crash.

I’m late to my own club, but to answer the questions quickly based on what I remember of the selections:

1: I’ve always been partial to O’Neil’s Azrael stuff (both this and the solo series), but objectively, I don’t think it’s as good as his earlier work. This is probably better than the solo series, though.

2: A bit of a leading question here, but basically, I don’t think writers worked to integrate the Order with ongoing Batman plots as much as they did the League of Assassins, but the two organizations are very similar in concept, so if the League works, there’s no reason the Order can’t. They’ve got a bit more of a technological bent compared to the League’s more mystical flavor, so I actually think a rivalry between the two could’ve been exciting.

3: If Biis had been followed up on in the solo series, that would’ve been fine, but all we get in either place is one big question mark. When it comes to Batman villains, I prefer my question marks to be purple on a green background.

4: I do find Azrael compelling, though we don’t really get to know him personally in this story. I think he really becomes interesting after Knightfall ended, but that’s a subject for another day.

5: I think Bane really works. He’s a little out-of-nowhere in how quickly he becomes important, but it almost seems fitting that he’s this completely unexpected threat. He’s Batman’s physical and mental equal, but comes from a polar opposite background without being excessively explicit or over-the-top like the Wrath, Prometheus, or even Black Mask or Hush (though I still do like the latter two).

6: I think Bane’s use of Venom emphasizes his contrast with Batman (and gives a little hint at how dangerous Bane is, since he seems to be able to maintain a greater degree of self-control despite his use of the stuff, at least for the time being), but the setting on Santa Prisca is fairly unimportant.