This is the Batman story that got G into Batman, and it also made C cry because it was scary. One of the most underrated Batman stories, in our opinion.
-The Moth Family

Okay I’m halfway through and have mixed feelings. This is definitely a 70s street level Batman who doesn’t go around beating the snot out of gods. I also like how the art reflects Batman’s state of mind. 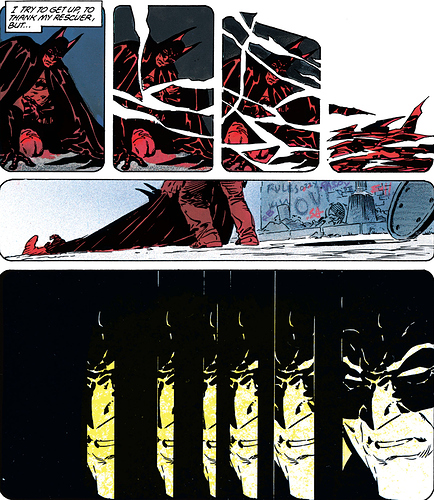 I was kind of willing to let that slide because we don’t know exactly what the soup they fed him was drugged with, but it did feel a little abrupt.

As for JT, he’s afraid of a couple of rats 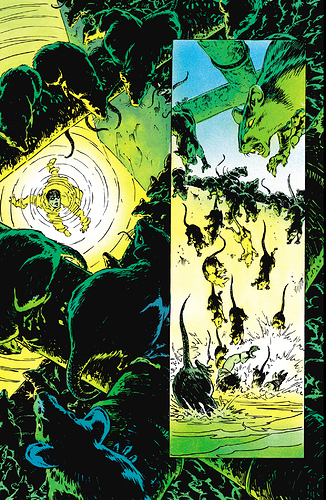 I bet it was one of those healthy soups. They always suck.

And I suppose Bruce is just yawning here. 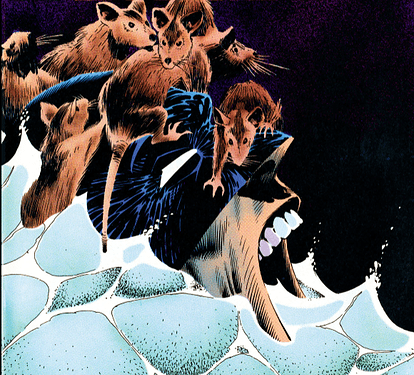 He’s trying to eat a rat in a kick butt Batman fashion.

Well, look: just because Bruce fed rats to Dick doesn’t mean that Jason has to eat them, too! 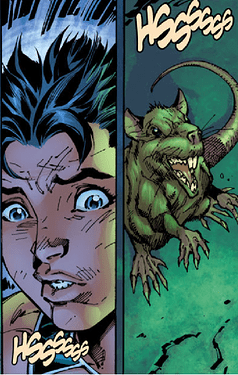 Finished today, my reactions to 3 & 4 mirror 1 & 2. Really like some stuff, but some major issues. On the plus side, this really is a great story for Jason Todd. He has great fight scenes, he isn’t totally accomplished yet but he’s still a little more confident of his abilities that a young Dick Grayson. This carries me through issue 3. 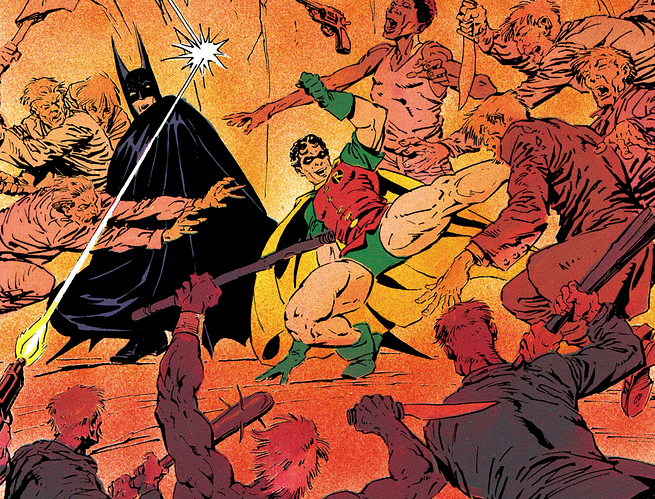 image1536×1171 3.12 MB
On the downside. I completely agree with Batman here, that the tv needs to die. This device of talking heads on the tv to move forward how Gotham feels is way overused. 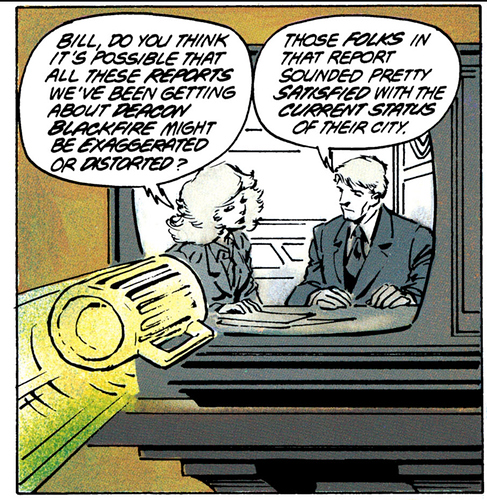 So, after a visit by three spirits on a single night, Bruce says he’ll keep Chris…Batman in his heart. 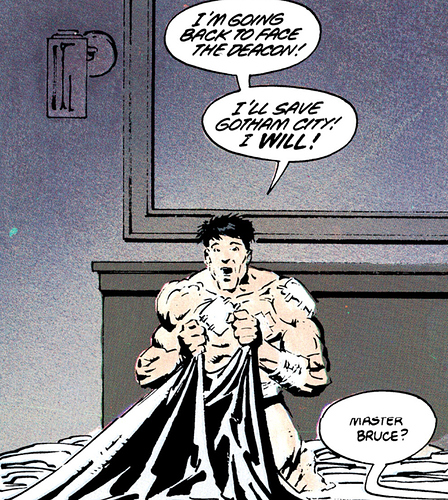 image661×737 751 KB
Then the story lost me. First anyone want to argue the whole Batman doesn’t kill thing again. The average round from a large automated weapon is more than 2,500 feet per second. I don’t care if you’re firing “tranquilizer darts” they will rip a body apart. Batman and his giant monster truck slaughter hundreds. And it wasn’t that interesting. 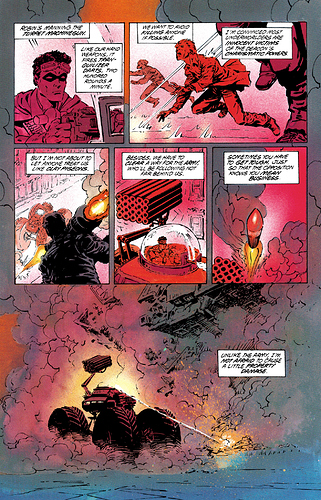 I know what you mean with some of the art looking sloppy in parts that weren’t meant to be the trippy. I did like it for the most part and thought they did a good job with how the panels were displayed. I also liked it better than Rises. Didn’t have as much a problem with Rises as you may have

. But do feel this was a better use of the plot than Rises. Talia’s death scene in that movie might be the worst one I’ve ever seen in a big budget movie! I also at first read was skeptical at how Bat’s was mentally broken but I feel like they sold it good enough as to not hinder the story.

I do think they cleaned up the brainwashing in issue 3 emphasizing Bats drug withdrawal.

Yeah that aspirating comic artist death was tough. I remember thinking Oh no come on let him live! The savagery of how people get picked off while on the streets was part of what I liked about the story though. It did a good job at giving you a sense of the horror that was being unleashed. I get why you weren’t buying bat’s being brainwashed but I do think it was plausible. I’m sure while in the military you had some intense survival training. It doesn’t take long to start losing it when you go without food/sleep, and minimal water. I know after 7 days with little to no sleep or food I was losing it and saw some crazy stuff. Top that with some crazy cult giving you hallucinogens I think even Bats would slip.

Clearly he is thirsty!

I totally agree with you on the TV News panels I found myself reading through those fairly fast. I get way they had them but feel they could have gotten the public’s views across with less dialog and maybe even just have it be some quick expo from Blackfire or another character important to the plot.
Yeah I thought about the velocity the tranqs would be ripping at also. I let it slide. I actually really enjoyed the part where they are rolling through gotham in the Truck. If you start to play “Boys are back in town” on page 22, it times out nicely for the next few pages! Follow that up with “Burnin for you” then “The Reaper” and the last issue is pretty fun

Also playing “Holy Diver” in #3 on page 21 where bats and robin see Blackfire through the hole in the cave wall right before they start to make a run for it is pretty fun and works out well with robins fighting panels.

Finished up just in the nick of time!

How do you feel about this story, did you like the art/plot/resolution?

Like I said, this is one of my favorite Batman stories and I think it still holds up. There’s little nags here and there, but overall I enjoy it.

I personally LOVE the art by Berni Wrightson in this story. Sure, it’s a little sloppy, it’s not very pretty, but this isn’t a pretty story – it’s horror, through and through. The ugliness only helps sell the horror of it. However, I will agree that there is a lot of copy/paste in places, especially with the news segments.

I think that’s partly why they don’t work as well as they do in Dark Knight Returns. When Miller draws those talking heads, he didn’t just use the same head over and over, but put them in different positions, went to a different camera, even something as small as changing the facial expression helps sell it as a moving picture. Moreover, writing-wise the talking heads did more than just do exposition, but were a bit of a greek chorus, hinting at some of the greater themes of the story, even had a bit of their own personality.

What were your favorite/least favorite parts of the story?

Favorite part I guess overall is Batman’s fall and rise. People say that the thing that makes Batman compelling is that he’s human, and I think moreso than the fact that he can bleed and get hurt, it’s that he’s fallible and can succumb like anyone else. It was a tragic turn to see someone who we know to be strong and willful get brainwashed and twisted into a member of the cult, and it makes it all the better when he does escape and does finally beat Deacon.

Similarly, I also really liked Jason’s involvement in this. He was a true partner for Batman, who went after him to save him, brought him back from the brink and they saved each other many times during the story.

Least favorite part is probably the newscaster stuff. I’ve definitely seen worse copies of this kind of thing (at least it wasn’t literally copying themes and ideas from DKR like the bits of Knightfall we’ve read for the club), but it could have been done better.

Did you find Deacon Joseph Blackfire’s character and backstory interesting and do you think he is worthy or would like him to be featured in more tales going head to head with our Dark Knight?

Sure. The Deacon himself is kind of a one-note crazy person, but he is effective in what he does.

Backstory wise, it should be noted that the Indian tribe that he mentions as part of his origins, the Miagiani, appears in other books, specifically in the Grant Morrison run of Batman and in Scott Snyder’s Metal.

And Blackfire has shown up a few times since then. He was part of the Black Lantern Corps in the Blackest Night: Batman tie-in mini. Then in the New 52, Blackfire was brought back as one of the (many, many, many) subplots in Batman Eternal. 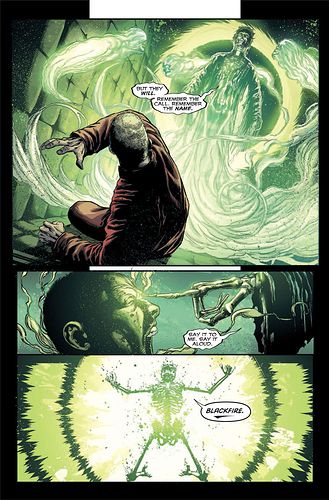 He was also in a Rebirth comic, but I don’t remember which one specifically. Finally, he was also one of the (again, many, many, many) side missions of Batman: Arkham Knight. 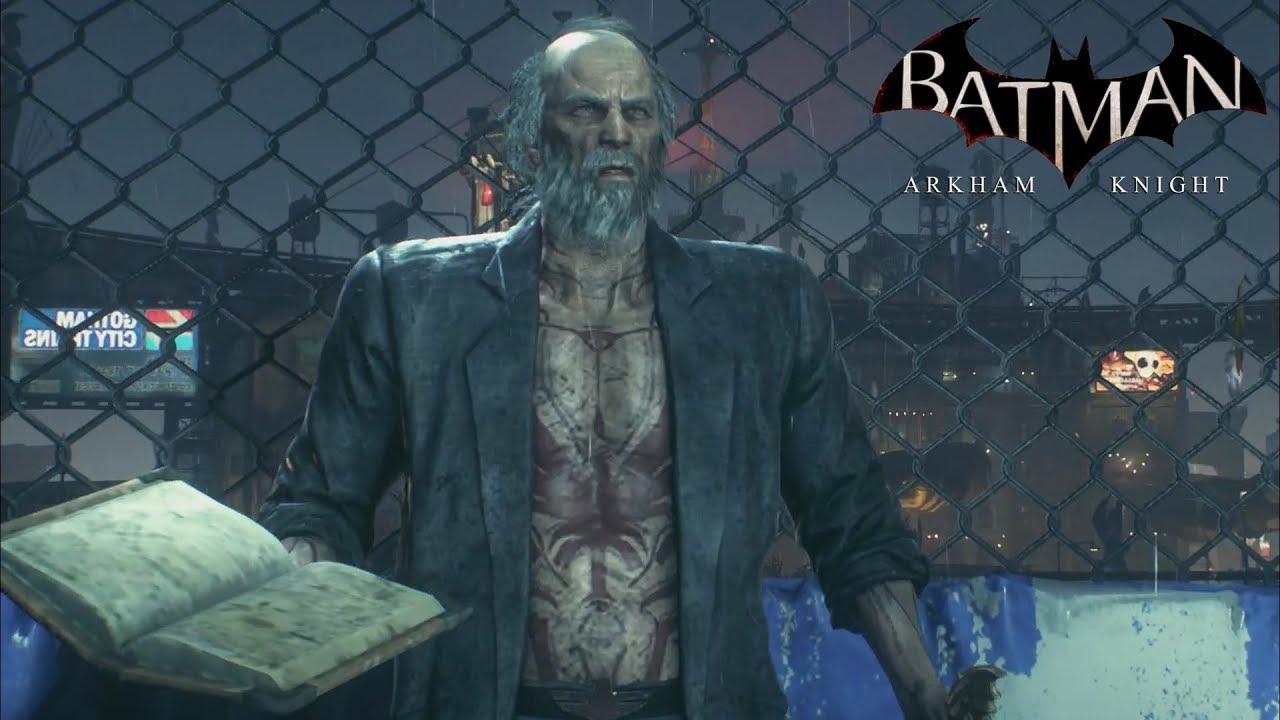 All in all, he’s done pretty well for himself for being a bit of a one-note villain.

Besides Nolan’s The Dark Knight Rises story, does this story remind you of any other Batman tales?

Aside from Return’s influence, I think there are comparisons to Bruce’s fall here to his addiction to Venom in the LOTDK story. By that extension, you can probably also compare it to similar fall and rises stories like Knightfall and Batman RIP.

Between TDKR & The Cult, which story do you feel was executed better?

Well, unlike Rises, The Cult doesn’t have exceedingly dumb plot holes like throwing all of Gotham police in the sewers so they can be captured, so that immediately has a lot more going for it. Ultimately, while I don’t hate on Rises as much as other people do, I do think The Cult is overall a stronger, tighter story. It has a specific, clear story that it wants to do and it executes it well. Rises has some interesting ideas, but I don’t think it quite gels as well.

@Jay_Kay, well said with how the art fits with the story, thank you. That is what I was trying to get at when I said I liked how they used the panels. I really love this story as well. I love the story’s that show him struggle and humanize him. I didn’t post on the thread but @BatJamags one on writing batman was great. Thats exactly the kind of things that make batman great. I know this story didn’t hit all the notes but it was good.
Yeah the news portion was my least favorite as well.
I didn’t know he was in other stories. I read a few of the Eternal stories but did really follow it. Was the tribe in Metal? Metal was good until the last couple of issues. I cldn’t do Rebirth.
Rises is ok to me but I agree the cult was done much better.