For my last week on the job before Jay_Kay takes over, we’ll be looking at the last few issues before the Knightfall story arc.

Our selections for this week are (attempting to stick them in a fairly coherent reading order; sorry if I fail to do so):
-OPTIONAL: Detective Comics #654-656 (Largely irrelevant, but if you’re feeling completionist, Bane and his henchmen cameo at the end of #656, so it’s technically part of the Knightfall lead-in)
-Batman #488-490
-Detective Comics #657-658
-Batman #491

It’s a rather eclectic selection, so it’s hard to present good questions, but here’s the old college try:

3: How 'bout that costume change for Azrael, huh?

BATMAN #491
1: What do you think of Bane’s plan? How would you go about taking down Batman?

2: Was Gordon right to disobey Krol, or was more force authorized?

3: Did this issue leave you excited for Knightfall?

I’ve been running these a week, so that would be midnight Eastern on October 7th, but basically it ends whenever Jay_Kay puts up the next one. 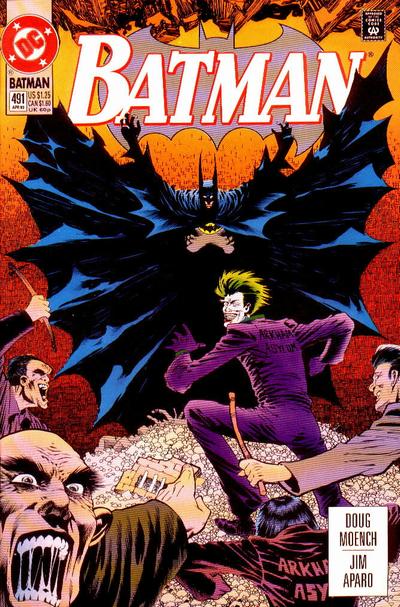 Cool choice! I read through the whole arc in trade not too long ago, but I’m willing to give it another go.

As for the start of my round, I was also thinking around the 7th.

I read the first trade less than a year ago.

About a week before DCU announced they were adding the entire arc, in fact. Whoops.

I just read these issues after reading Vengeance of Bane. Honestly, I think they’re fairly disposable. Azrael remains boring. Bane does nothing new of interest. The General is utterly silly. The Riddler is wasted. Killer Croc is drastically dumbed down. Bring on Batman #400…ahem, I mean #491. (Totally not the same plot.)

How can i join this club

@javieranthony160.76708: No special procedures necessary! Just read the week’s selected issues over in the Comic Books section the apps and comment here with your thoughts!

Sadly I don’t think I’ll be able to get through all these before the deadline, but since I had read these issues fairly recently, I will say something about the question about how Bane shapes up in this story and whether it makes sense he can manipulate all these villains.

For one thing, I’m not sure it’s fair to say he’s manipulating all the villains so much as he just opened the doors and kicked back while they ran Batman ragged. It’s a pretty good plan overall.

However, and I’m pretty sure I mentioned this in talking about Vengeance of Bane a week or so back, what bothers me about this is that it’s way too close to Bane’s origin and making this his first real act not only cheapens Batman, but cheapens Bane as well.

When I’ve seen Bane in other media before reading these stories, Bane has always been an established name – from the Animated Series, to The Dark Knight Rises, to Arkham Origins – he’s always interpreted as someone who has run Santa Prisca or had been a feared assassin for a long time, someone who has seen and beaten them all, and found a new challenge in the Batman. It’s two established, titanic forces colliding and only one can come out the winner.

But the way Chuck Dixon does it here just doesn’t work for me. It makes Batman look bad, because it makes Batman look bad being beaten up by this no-name chump, who from what we’ve seen, has hardly even been in a fight a day in his life! And it makes Bane look like a one hit wonder, who hits it big his first time and doesn’t have anything he can follow up with.

I’m just glad that other writers have been able to take his character and been able to really make him work in later books. Gail Simone’s Bane is at least one thousand times more interesting and scary than Batman’s Rick Astley.

FYI your calendar event shows up under Upcoming Events on the main community page but not on the actual Community Calendar, hopefully the Mods (or Kelex) are looking into this.

Here’s the link to our Discord channel on the DCU server for when the forums go dark for Community 2.0: https://discord.gg/v6CESQr

Jay_Kay and Aquamon should have full privileges to fuss with the settings as needed.

Just stopping in to thank you for mentioning what you’re seeing with the Upcoming Events section, and community calendar. We’ve made note of it, and are, indeed, checking on it.

I think the story so far is basically showing how tired Batman is and his lack of trust in his allies is leading to his downfall.

Azrael - At this point in the story, I’m not sure if I truly feel he is an adaquet replacement for Batman. Maybe a Robin stand in, but he is already insubordinate towards his senior at this point. I just didn’t get the Batman vibe off of him. Which I guess we can argue Bruce Wayne wasn’t thinking clearly due to fatigue. To which I say if he is capable of dealing with over half the enemies from knightfall (including a venom riddler) he should have been able to detect something off with Azrael.

Robin - I just don’t know about Tim. I mean come on, your Robin. You know that Batman isn’t fit for duty, call in the intervention team. I hate to say it, but I blame the whole Knightfall event on him. Plus when Azrael was doing live training, he should have definitely seen the signs. Maybe Jason Todd would have let it go (because he and Azrael are kind of similar), but Tim just basically ignored the signs.

Alfred - after reading these I’m almost convinced Alfred wanted Batman to fail. He had more than one opportunity to over rule Bruce, but all he did was complain yet support his bad choices.

I loved the prelude to knightfall, but after reading them I have issues with Batman’s support system… And Where was the Huntress!?