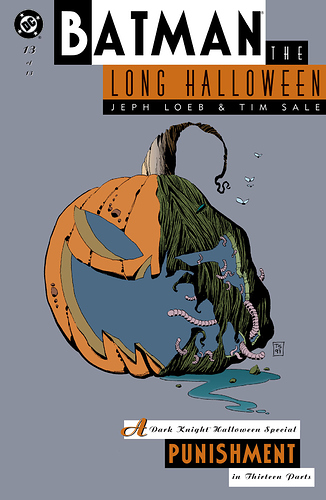 Hello once again, and welcome to the World of Bats: the Batman Book Club! And Happy Halloween! Wait, what? Thirty days away, you say? Nuts to that, this year, we’re going to have a Halloween that lasts all month long! An…extended Halloween!

…Which is my silly way of saying that in this thread we’ll be covering the iconic 13 part Batman storyline, The Long Halloween!

A Costumed Hero learning he can trust no one.

A Crime Lord trying to hold onto a crumbling empire.

And a Friendship that would be shattered forever.

These are the pieces of the murder mystery the Long Halloween.

Created by the Eisner Award-winning team of Jeph Loeb and Tim Sale (authors of Superman For All Seasons, Catwoman: When in Rome, and Batman: Haunted Knight), this compelling look into the Dark Knight’s early career features some of the most deadly and cunning members of Batman’s rogues gallery and a dramatic retelling of the origin of the tragic villain Two-Face.

And here’s the link of where to find this story on DC Universe: DC Universe

So let’s get to reading! Will this be your first time reading it? Or like your fifteenth? What do you think of the characters of this story, or the overall mystery? Let us know down below!

BatJamags better get in here to say nice things about this story before I nitpick it to death.

Hey, dissent from the popular opinion can make for some great conversations! Looking forward to reading your thoughts.

Been a while since I’ve read this, but I’ll see what I can do about giving it a reread so I can tell you all why it’s great and actually makes more sense than even people who like it give it credit for.

I feel like I may get slack for this but it’s in my top 3 batman stories.

At what point does an homage just become a ripoff? 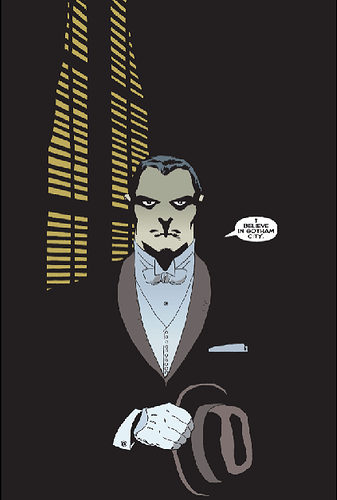 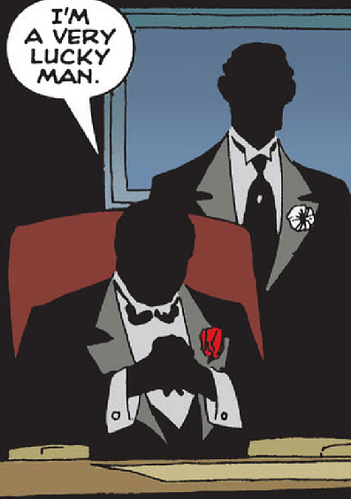 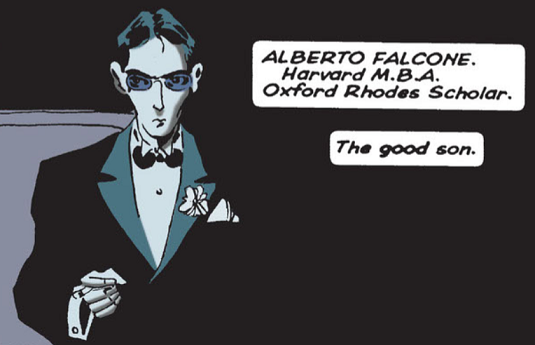 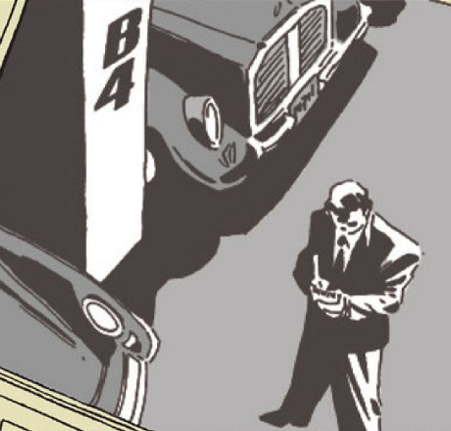 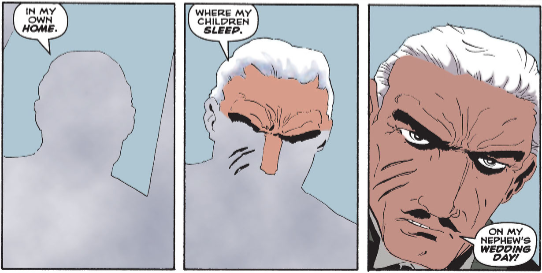 Or perhaps a parody?

It’s definitely the most blantant instances (that I can think of). Though for me personally, I read The Long Halloween before I saw The Godfather, so it was fresh for me at the time, and even when I watched The Godfather, it didn’t really register that I’d seen stuff like this already, if that makes sense.

Meanwhile, The Godfather has been on my “favorite films of all time” list for decades, so that sort of thing hit me like a Harley Quinn mallet.

(Though in fairness, I should note that the last image lifts a line from The Godfather Part II.) 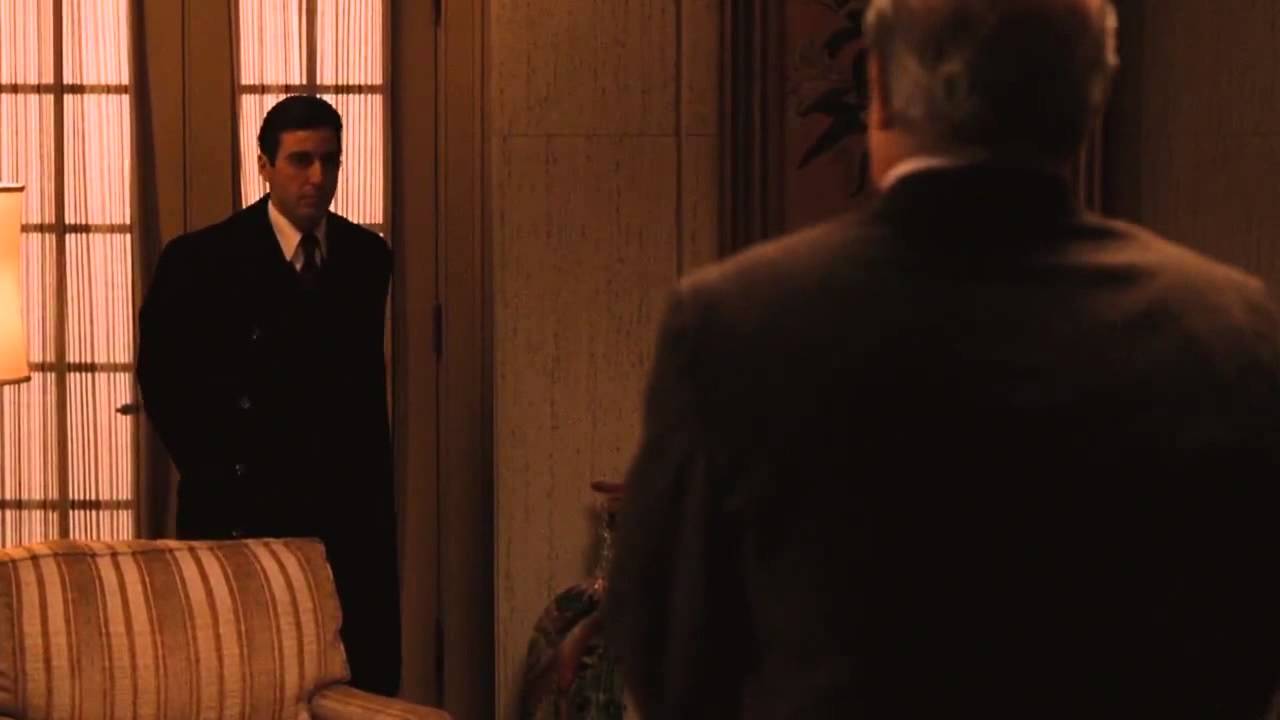 It’s been a while since I’ve read this and I’m looking for to reading it again. I never read comics much as a kid, I got more into it as an adult, and this was one of the first Batman comics I read (I don’t recall if it was this one or Batman Year One that was first). Whatever I think about it on the re-read, I’ll give it credit for getting me into Batman comics.

At the risk of sounding like a 90s stand-up comedian, I must ask: “What’s the deal with Solomon Grundy?” I know he’s generally not that bright… 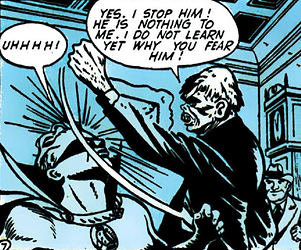 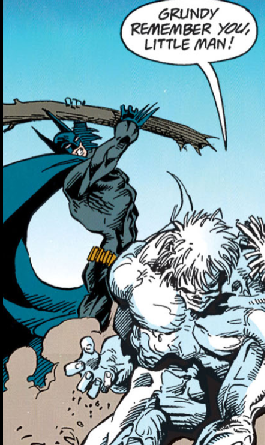 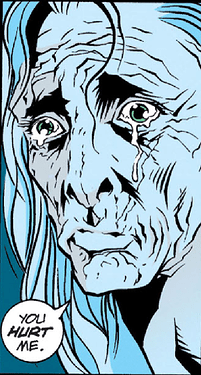 …but he’s usually able to form original thoughts instead of repeating a nursery rhyme.

and this was one of the first Batman comics I read (I don’t recall if it was this one or Batman Year One that was first).

Same here! I don’t remember the exact order – I know my first was Dark Knight Returns, and I think the second was either Year One or Arkham Asylum, and then after that was The Long Halloween. I think that’s a big part of why a lot of people love this book because it was one of their first exposures to the Batman universe.

At the risk of sounding like a 90s stand-up comedian, I must ask: “What’s the deal with Solomon Grundy?”

I’ll allow it, but if you start talking about airplane food, I’m kicking ya out.

Seriously though, the rhyme thing is definitely a departure. I can’t recall if Loeb ever talked about that aspect of it, but if I were to guess, I imagine he thought it would make him sound a little different than a generic Hulk clone that he, frankly, is.

Reading the first issue, I will say that while yes, it’s probably too much of a Godfather grab, I do think it’s a great way to introduce a lot of the key components to the story. I mean, what better way to show all these relationships with the Falcone family, Bruce’s hinted connection with it and so much more than having them all together for the same occasion?

The whole issue I think really sets up the personal relationships and conflicts of our characters well, from our heroes in Batman, Gordon and Dent trying to stop the Falcone family, to the Falcones themselves trying to stay afloat, and Selina Kyle’s mysterious connection playing at both ends.

But what I think really makes this issue – and the whole series, really – shine is Tim Sale’s art. It’s absolutely beautiful. I love his take on Gotham and it’s world, feeling both modern and timeless, his characters are all unique and full of personality, and his storytelling is superb, being clear and yet very creative with placement.

Issue 3, Loeb 0. I’m immediately irritated that the Joker is messing up the lyrics to “Winter Wonderland.” The Clown Prince does a little better with his parody of “A Visit From St. Nicholas.” But then we get Calendar Man as a Hannibal Lecter knockoff. sigh Not a lot happens in this issue, but we get the Joker being obnoxious and Gordon suggesting that Batman is potentially responsible for the rise in Arkham inmates, so I’d probably regard it as the best one so far.

a generic Hulk clone that he, frankly, is.

Wouldn’t the Hulk be a clone of Grundy? Solomon Grundy was born (on a Monday?) in 1944, nearly 20 years before the Hulk came around. Granted, later writers certainly wrote Hulk-esque lines for Grundy, so there’s definitely some cross-pollination.

Three issues in and I’m digging it. The art is beautiful and is a complete match for the tone of the story. I like seeing Batman working on a mystery and I enjoy that his relationship between Gordon and Dent is being fleshed out a little bit.

I was a little annoyed with the Joker not getting the song lyrics correct and his whole grinch parody(?). Joker’s motivation for hunting down “Holiday” doesn’t exaxtly work for me either.

I do, however, think it’s cool that many of the main villains get their own spotlight issue.

Issue 4: Okay, nothing happens in this issue. I already noted that issue 3 was a little sparse, and I suppose it’s because this rather simple fight against the Joker had to be dragged out forever.

Issue 5: You may have been thinking, “Wait, but issue 4 gave us Dent’s first suspicions about Bruce Wayne!” But why then did Dent and Gordon decide to wait A MONTH AND A HALF before following up on that suspicion? Oh, right. It’s because of the holiday gimmick, which is getting more and more contrived. We’re not even halfway through the story, and we’re already getting some of that patented Loeb padding. Move it along, please.

Issue 6: I suppose I can’t hate on this issue too much. After all, it’s basically a rehash of a Gerry Conway-penned Poison Ivy story from the early 1980s that I really like. I would gripe about Poison Ivy’s presence as a pre-Robin rogue, but that’s a general problem with post-Crisis continuity, not this story in particular. But I almost wanted to laugh when Gordon told Dent, 'Take it slowly." Dude, it’s been two and a half months since Dent brought the Wayne thing to your attention. I know that Year One also played out over an extended period, but it never felt like the characters just decided to take a vacation for a month. It would be a little different if it felt like they had actually done any work on the case between issues.

Issue 8: Bruce Wayne has a “Martha” moment. I just hope it’s because of the fear toxin.

Things are starting to move forward…kinda…I guess. It’s just unfortunate that Loeb can’t seem to find the time in this Two-Face origin story to give Dent any more to do than mumble about killing gangsters and grumble about arresting Wayne.

Issue 9: Loeb reworks Bill Finger’s Lew Moxon story and swaps in the Falcones. And then Luigi Maroni shows up to give us some more direct lifts from The Godfather. Eh, at least Dent finally has his coin. It’s the best issue since the third one, thanks in large part to some forward progression in the narrative. (Of course, I could point out that the trial wouldn’t realistically happen so fast, but the story is too decompressed as it is, so I’m not complaining.)

Issue 10: See? Here you go. A genuinely good issue. Yeah, Loeb is practically making a mockery of the Scarecrow and the Mad Hatter, but the character work is otherwise solid.

I’d say my complaints could be summed up like this: the concept is good enough, but the pacing and structure leave something to be desired. I think the story would have worked better if it had started on New Year’s Eve (a few weeks after the coda of Year One) and wrapped up near the end of Batman’s second year. There’s not thirteen issues’ worth of plot here, and I’m not fully sure that there’s even twelve. It’s making a mess of the timeline for no good reason.

Issue 12: We finally get the Holiday reveal, and…well, it was kinda telegraphed in the first issue, wasn’t it? Obviously, they wouldn’t set up a Michael Corleone character and then just kill him off unceremoniously.

Issue 13: I like what this issue is trying to do with the conflict between the mobsters and the supervillains, but it’s a rather limp death for a major character established in Year One. And then there’s that final scene, which is just the silliest twist imaginable.

I liked the idea of Alberto as the killer more than Gilda. It seems like they did a good job setting it up to be him, especially considering that his body is the only one we didn’t see after his “death.”

After finishing my reread, I still like it quite a bit. Although, I now think that has more to do with Sale’s artwork, which I think is gorgeous, than the writing. I liked the parallel meetings of Gordon, Dent, and Batman at both the beginning and end; the symmetry there was very satisfying. The idea of the “freaks” (as Falcone called them) against the old-school mobsters is very a interesting one and I think it could have been executed a little better. I suppose they wanted to save it until the end, and it felt a little rushed.

All in all, I think there was more to like than not and I was happy to read through it again.

In my opinion I think it’s one of the greatest Batman story I’ve ever read. It has a great mystery on who the Holiday killer could be. I can’t wait to see this series into a 2 part movie.