@DCCC, thank you for the kind words and sorry if I hurt your sensibilities with my little comment…I know they’re never “dolls”…was just being facetious

That super articulated DC Direct Superman still holds up well. I have him from the Reactivated line.

@biff_pow. That Neca Reeve figure is awesome. I’m super delicate with it because of all the breakage reports. Really appreciate you posting the pic of that and the M. Ali version side by side. Though a repaint, it does look different enough where I might consider a future purchase.

Great job @moro. My favorite is the Hot Toys Christopher Reeve one hands down. I also really like the Side Show one.

Here’s a 2 for 1. Alex Ross and John Byrne have drawn, what are to many, the best versions of the Man of Steel. Back in 2005 I believe, DC Direct released a Superman figure as part of their Alex Ross “Justice” line. The face sculpt is very true to his art. In 2006, they took the same body, with a different head sculpt and cape, slightly different shades of blue/red, and created a John Byrne Superman. That one was released as part of a box set called “Superman Through the Ages”, which is high on my list of things to add to my collection. Funny enough, when I did a google search for one of the 2 figures, I got an image of both side by side 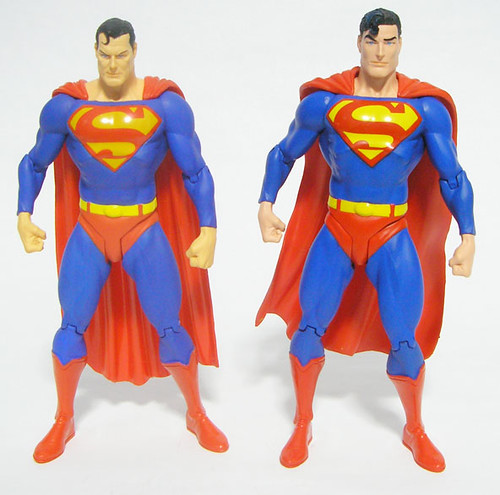 Yeah I really like those. Alex Ross is amazing just reread Kingdom Come last night oh my goodness so good.
I have the superman from Infinite Crisis but i like the longer cape this one has.

This isn’t a favorite, but DC Direct’s Superman figure from series two of their Batman: Hush line is keen. The sculpt is spot-on to Jim Lee’s art, plus he has the hover stand.

Pity DCD didn’t do figures for For Tomorrow.

I know exactly the one you are talking about Vroom. Very nice figure, but wasn’t high on my list because I didn’t want a possessed Superman. However…remember that “Through the Ages” box set I mentioned earlier? Well, they took that figure, redesigned it into a standard Jim Lee Superman (without the vines and tattered cape), and released it as a “For Tomorrow” Superman as part of that set. Pictures incoming. Here’s the Hush figure you just mentioned. 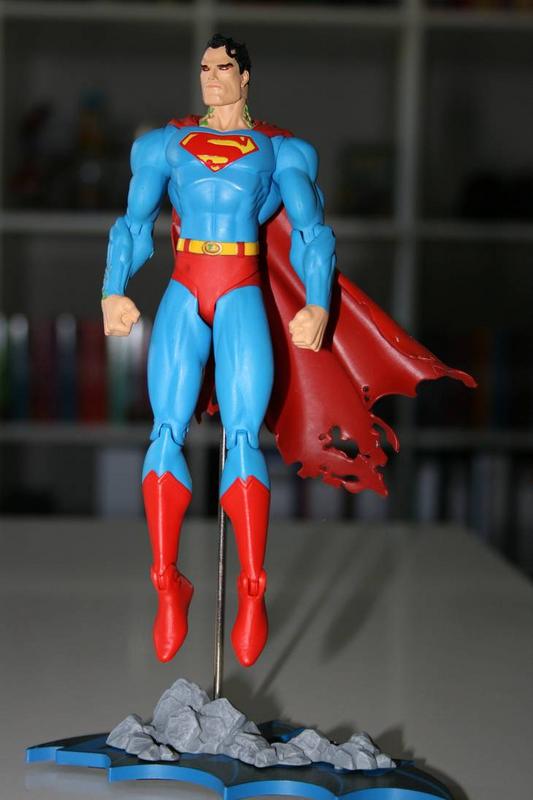 Here’s the “For Tomorrow” version. 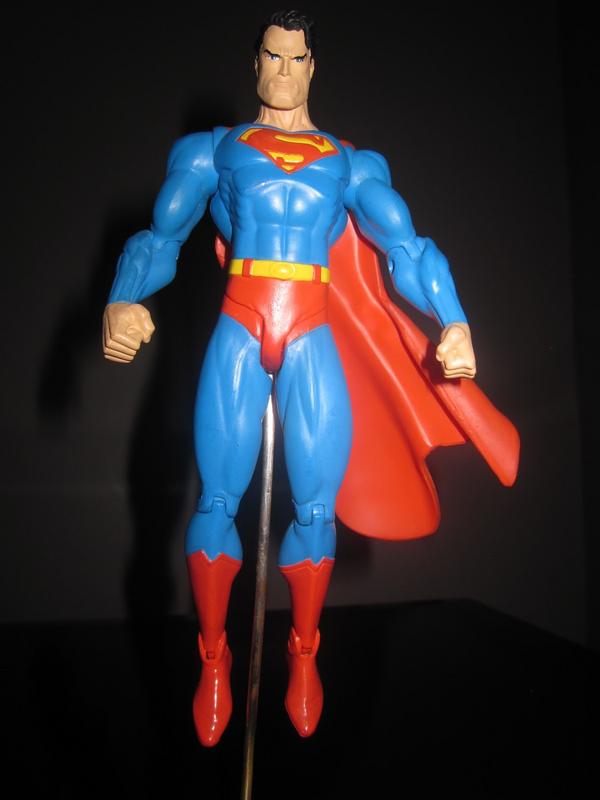 Here’s the side of the Through the Ages box set. Gives you an idea of what’s in there. Don’t know what the robot is.

When I first asked @Vroom for his feedback for this post, he mentioned 2 figures: the Mattel DC Superheroes figure that I included in my initial comments and this one, the Kenner Power Flight Superman from their “Man of Steel” line. I didn’t know much about it so I kept it on the back-burner. I’ve since come to the realization that I don’t know a whole lot about 90s action figures, as evident from everything I’ve posted so far. This apparently was popular back then. Came with a chain that Superman broke out of with a “power action”. Feels like an evolution of the Kenner Super Powers figures from the 80s. 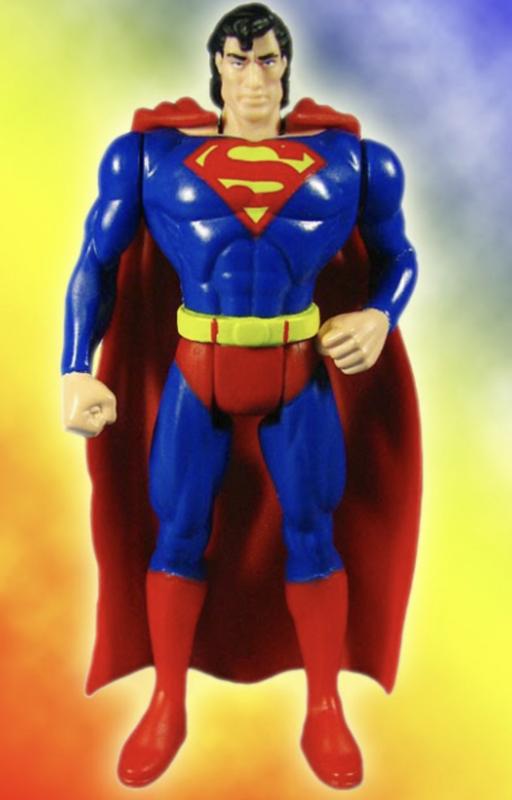 Oh I want that through the ages box set now. Hey @moro have you ever seen the max fleischer superman statue with him and lois. daily planet news papers for base? oh it looks good.

also For Tmrw and Hush both look upset.

Hmm…rings a bell…I’ve probably come across it on ebay at some point, @Aquamon. A DC statue thread could be fun, if there’s enough interest from other members. As for Supes not smiling, I don’t remember him doing a whole lot of that in “For Tomorrow”…he was mostly no nonsense most of the time, given the story. Haven’t read Hush yet, but I know that figure is based on him being mind-controlled by Ivy.

@moro I’m familiar with the FT Superman from that set, but a whole For Tomorrow line would’ve been aces.

Mattel was reportedly working on a 6" Superman line around the time For Tomorrow was coming out to compliment their 6" Batman line, but that never materialized.

I’m curious if any design/concept work has come forth from it. A Four Horsemen sculpted Superman toyline would have been awesome.

At least they did a plethora of Superman characters in the other Mattel 6" scale lines. The Four Horseman Superman villains are all top notch figures.

Speaking of the Fleischer Superman, Jakks Pacific made him in their Big Figs line a few years ago. I think he was a Walmart exclusive. To my knowledge, that’s the only Fleischer Superman action figure ever made.

My personal favorite has to be my NECA 7" Toys R Us exclusive Christopher Reeve Superman. He actually wrestled the Top Spot away from the DC Direct Man of Steel Superman.

Another vote for the Neca Reeve Superman, a fine choice @golddragon71. Not sure I’m familiar with a DC Direct “Man of Steel” figure, unless you mean the John Byrne one that came as part of the box set mentioned above. Care to elaborate? Curious what your previous favorite was before the Neca

No it was the first modern age Superman DC Direct did in 2003 There were three figures in the first wave Superman, Bizarro, and Braniac 13. The second wave had Supergirl Doomsday and Cyborg Superman

Ah that would be the Superman with 21 points of articulation. We talked about it some a few comments above. Think that was many people’s favorite for a long while.

Been a while since anything’s been posted here. Luckily (or unluckily if you’re tired of this thread

), there’s still many Superman figures that deserve to be part of this list, and a Man of Steel/action figure enthusiast in myself…so, let’s look at some more!
Since we’ve looked at mostly classic style variations with the red trunks, today I bring you something different, Kryptonian Life Suit Superman. Another DC Direct figure, this one was issued in 2004 and is meant to capture Superman in his black suit and long hair from the Return of Superman storyline. I’ve seen a similar figure from Mattel, but I feel this one captures the likeness from Jurgen’s art better. I’m also always a sucker for a sculpted S. A nice way to break up the more traditional Superman figures on your shelf. 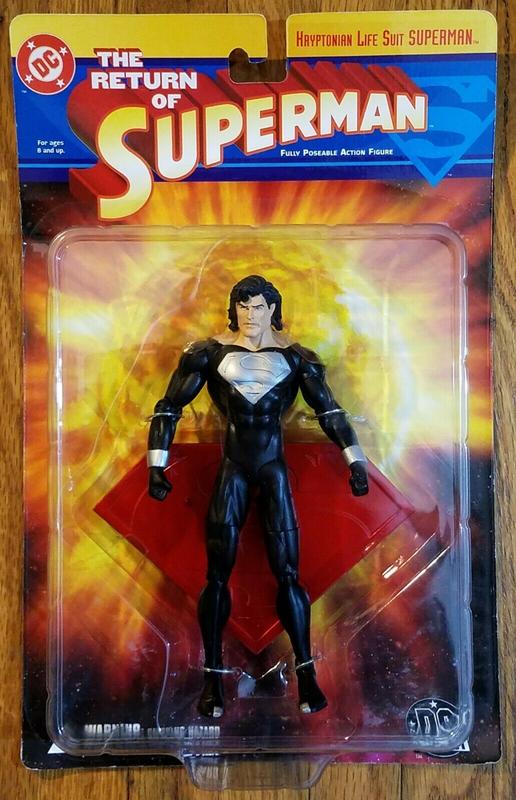