Choose Your Own Adventure

This week, World of Wonder will be continuing the Club Crossover event with @msgtv and @N81 by reading the Batman '66 Meets Wonder Woman '77 (2016-) crossover comic.

World of Wonder will also be concluding The Odyssey of the Amazons ('17) as we finish the story starring Hessia.

What will you be reading this week?

A confession! I’m a cheater! It’s true, I knew this was coming and started reading Batman '66 meets Wonder Woman '77 (though shouldn’t it be Wonder Woman '77 meets Batman '66?) early in the week. I had read the Wonder Woman '77 comics which started out strong, but I thought kinda sputtered out near the end. The first 6 issues of this series are an absolute delight. Though they went with a somewhat cartoony style for the art, there was no doubt this was Lynda Carter’s Wonder Woman. 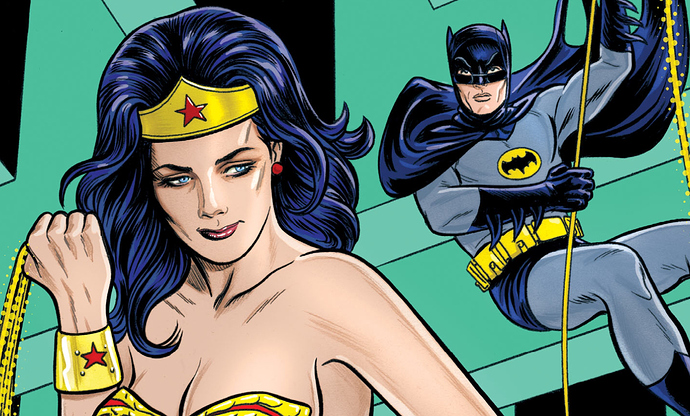 image1431×864 1.15 MB
The flashback issues really hit the spot. We see young Bruce and his new friend Talia, and they both feel like little versions of their adult selfs. I was glad to see Ra’s introduced to this universe. 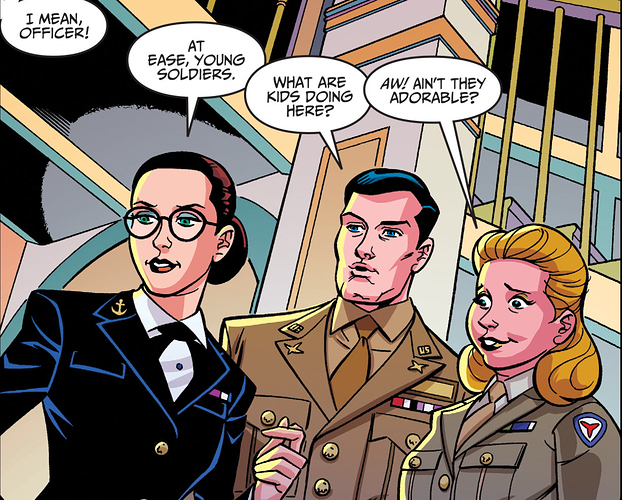 image1912×1536 1.91 MB
Super high credit for Etta! She is something of a combination of the television and the comic Etta. We even get a Woo Woo, and she’s not afraid to help Wonder Woman.
Why is it that German’s can always speak nearly perfect English but slip into German for words that we clearly understand? 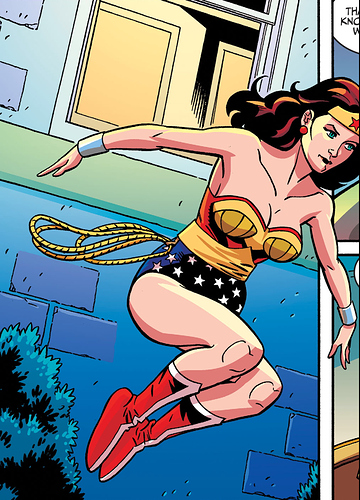 image1107×1536 1.29 MB
Just like the show, jumping is Wonder Woman’s greatest power.
This is a miss. I’ve never heard Wonder Woman '77 ever use a derogatory term for anyone. I’m 80% German and couldn’t care less about the ‘Kraut’ thing, I just don’t think she would say it. 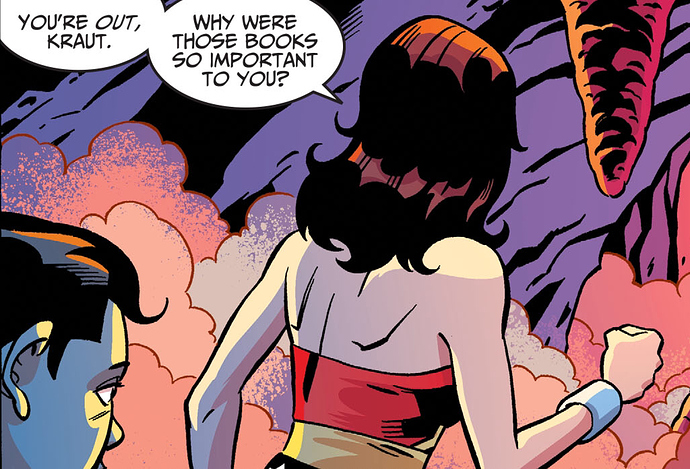 Can’t wait for the second half of the series.

I also.did some reading of Batman 66 Wonder Woman 77 fir the Histoey Club

A great tria of stories

:Gasp: We have a spy leaking information

There really is no doubt that’s Lynda’s Wonder Woman. Adam West too!

The flashback issues were awesome to see. I didn’t expect that to be how the story starts out. It’s a bit strange seeing Ra’s in a world like Adam West’s Gotham. Seemed like Ra’s would have fit in with the Wonder Woman show quite well.

This is a miss. I’ve never heard Wonder Woman '77 ever use a derogatory term for anyone.

Yeah, I didn’t know what that meant so when I Googled it, I was taken aback to see the definition listed as:

Her jumps were on point though. There were some parts where it seemed like she flew such as when getting out of the maze or when she was going after Bruce in the caves. I had to do a double take

As always, you’re a great researcher! Really cool always getting to read your thoughts and how well layed out they are

Yet Drusila still same age 25 years later in 1977? I know it was done to give Teen Titans vibe.

Same Catwoman from 1940s on. How? Nine lives or different women?

Not sure about Catwoman, but Drusilla is Diana’s sister in the show so if Diana doesn’t age, I figure the same would apply to Drusilla.

Most Amazons created as adults

In 1950s 1960s storirs
Diana went from
Wonder Tot to Wonder Girl
To Wonder Women
Maybe it took.centuries for that to happen

In Wonder TV show Second Season she says she is than two thousand years old.

Maybe she aged one year a century?

It’s possible Amazons in this continuity age slowly up to a point and then stop aging. I got the sense Drusilla was not one of Diana’s many Amazon sisters, but actually Hippolyta’s biological daughter and Diana’s younger sister. I could be remembering that wrong. I’ve only seen a few episodes a long time ago.

If I’m remembering correctly the Wonder Tot, Wonder Girl, and Wonder Woman at that time were all Diana at different stages in her life, not that Diana aged from Wonder Tot to Wonder Woman in that time frame. Stories would also feature those three versions of Diana together and was the reason we now have an actual Wonder Girl (Donna Troy). For those reasons those stories are not really good to base the aging process of Amazons on.

But I read Wonder Woman in.the 1960s and there were stories with Diana as Wonder Girl with her boyfriends Mer boy and Bird Boy.

It was all very confusing especially considering two writers who were not heavily into canon or continuity.

But I read Wonder Woman in.the 1960s and there were stories with Diana as Wonder Girl with her boyfriends Mer boy and Bird Boy.

Yeah, that young Diana was from flashbacks right? Like you said, because those writers were not focused on canon or continuity, it’s hard to use any of them as reference points.

We can really only go by what the show establishes and Diana doesn’t age, so Drusilla doesn’t either/ages slowly. It’s definitely an interesting thought.

They age at the same rate as The Simpsons

Catwoman is in first part but then story goes back in.time to 1940s where she is not present

So first couple of pages and second part are in same time period.

I ws wrong on time periods

It’s a bit strange seeing Ra’s in a world like Adam West’s Gotham.

Yeah, that and seeing young Bruce fall down the well and get scared by the bats was surprising for me to see here. Maybe I just don’t give the '66 series enough credit, but it’s hard for me to imagine anything really that severe to happen in that series. Like, it’s hard to imagine even his parents dying in that universe, it’s just that clean and innocent.

I’d have been interested in seeing the Batman '66 series version of Ra’s. What would that have looked like and how campy would he and Talia have been?

This version that’s pretty much the same Ra’s as the one in canon fits really well with Wonder Woman though, so I’m okay with it

After finishing the miniseries, were you satisfied with this story?
For the most part. I found myself musing on the prophecy, with the last page of the book showing Diana in profile makes me guess Darkseid. I hadn’t read ahead when we read the first half, so the reference of an ambassador to come was a nice nod.

The reveal of how Amazons in other lands came to be was to prepare for the prophecy was definitely satisfying because it was like a neat bow tied on the present. let me use other words: it may have been comic book logic, but it didn’t test the limits of said logic.

So Thor is a ginger, but a one eyed Odin definitely helped make that scene. that the Greek Fates and Norse Norns(?) were the same worked for me as well closing the story with Hessia taking the Amazon’s destiny into their own hands which followed the beheading of Surtr. And Thor wasn’t so chauvinistic despite his double standard for the Valkyries when first seeing the Amazons in the arena.

Question for anyone reading this selection: do you pronounce the j in Jotun or Jotunheim? part way through 4-6, i made it sound like a y, as you would with Mjolnir.

Would you like to see a follow-up series and if so, what would you like to be addressed?
I probably would read more of this Hessia and her tribe of Blood and Shield, but is there more story there to tell? Is there a more polite way to say “no thank you”?

Were you intrigued by any elements in this story that you’d like to see explored more? What did you most enjoy from these issues and the miniseries as a whole?
I liked the Norse mythology framework for the most part. that they were in Valhalla vs Asgard would probably put off those more familiar with Norse lore. that quick scene with Freyja and Hessia in Asgard seemed more like trying to squeeze it in. Overall, that they were connected worked for me. Seeing the triaxe in the first half was a good tell even though Hessia and co. didn’t really acknowledge it. And I knew the owl meant Athena, which also doubled as the proverbial ghost in the machine.

'77 meeting '66 is another quick read. also, the individual isses seem shorter, but i didn’t check the page count. Some initinal thoughts:

The first Catwoman was more Eartha Kitt and the chaperone was more Julie Newmar.
Ra’s drawn more a la BTAS makes him more recognizable to the audience, but i was hoping to see him drawn as some actor, either from the era or something between then and now. the art is a little cartoon-y, so alas hope(s) dashed once again…
young Bruce and young Talia set up a nice backstory, including but not limited to showing Wonder Woman existing in the same universe.
This Alfred doesn’t feel like from what i remember from the show. But that Alfred knew how to gatekeep that batphone.
I liked that the batjet was at an airport,
I will always enjoy any moment where “unity with the beasts” comes into play.
Robin’s Holy {}'s!! were well placed and …story appropriate…

The first Catwoman was more Eartha Kitt and the chaperone was more Julie Newmar.

I noticed that the first Catwoman was more like Eartha Kitt, but then thought I was wrong because the one in the later issues was definitely the Julie Newmar version. It also confused me since Eartha came after Julie on the show

I did like that they were able to be in the same Universe and it wasn’t some Earth-hopping going on. If only the shows had done a crossover like that.

I will always enjoy any moment where “unity with the beasts” comes into play.
Robin’s Holy {}'s!! were well placed and …story appropriate…

Agreed with both of these. I always enjoy seeing a griffin. Can never go wrong with them